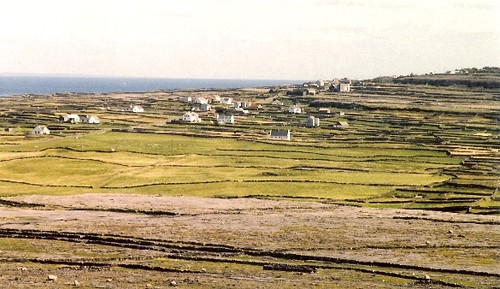 I woke up and headed down to the ferry dock. The sky had cleared overnight, and it was only partly cloudy now. But, the sun was shining down on me. I boarded the ferry, noticing the water on deck. I ended up sitting on the side of the boat that got soaked by the rough Atlantic waves. After about ten minutes of getting wet, me and everyone else in the immediate area moved. I sat (alone) on a bench near the one I was just on. I was surprised at how well I felt. And the seas were quite rough, the tiny ship was tossed. Water rolled back and forth across the deck. I didn't mind getting wet. It all added to my rough seas experience. I know the trip out to the islands was bumpy because on the way back, the water was still, and the ride was smooth.

About ten steps after I got off the boat, I was reeled into a tour bus. I got in since it was going to all the attractions ($7.50). It turns out that most people bike the island. And at ten miles long, it is not too bad for a day's workout. The whole island was covered with miles of stone walls. The amazing part was how the rocks were all placed and balanced by hand. The fort was said to be at least 4,000 years old! I tried on a $135 Aran sweater, but didn't come close to buying it. Just too expensive.

I realized when I got back to the hostel that I was sunburned (in Ireland, no less). I took a three hour nap. I only got out of bed to check out McDermott's. When I got there (after checking out an amazing sunset), I was so tired. Even more, I had no money, only enough for a pint of cider. The band was really good, and for the first time, I saw a person playing a pipe/flute. Six people in all. There was no singing after the first two songs. Once again, I was forced to stand due to the crowd. Tired, I returned to the hostel for sleep.

As I walked back, in the dark, noticing the stars, I thought about how little had changed in that Doolin pub. There were travelers in the past, who could stop for the night and be entertained by a trad band. I thought about this for awhile, even as I went to sleep.