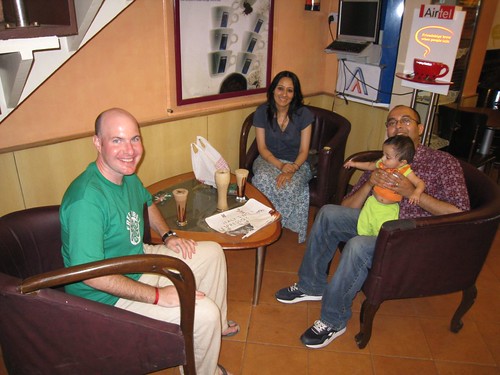 Neil, a lifelong resident, is the nephew of a woman who works at my parent's local bank branch.  I met his Aunt while I was giving my mom permission to access my bank account.  Apparently she'd taken an interest in my trip because she suggested I meet up with Neil while in .

He picked me up at Sunny's a few hours after my tour of Old Delhi.  The car's air-conditioning was in full effect, and I immediately knew I was in for a rare hassle-free evening.  Neil suggested a good head massage would help to relax me, so we headed toward the salon he and his wife frequent.  We got to know each other during the ride, and I was thankful to be seeing more of the city given my limited time.

I was due for a shave, and after 20 minutes and one painful application of after shave later, my face felt as soft as a baby's bottom.  The head massage with olive oil came next.  At one point, the guy strapped a massage machine to his hand which caused his fingers, and in turn my scalp, to vibrate like crazy.  Despite my lack of hair, I didn't protest Neil's suggestion for a shampoo given all the oil rubbed into my skull.  To my surprise, my head was left feeling just as soft as my face.

We drove back to Neil's home where I was introduced to Shivain, his new 6-month old son, and Shruti, his wife.  They had a beautiful home, and I felt lucky to be given such a warm welcome.  After more conversation, and a baby feeding, we went to dinner at Swagath, voted ‘s best coastal restaurant by The Indian Times (newspaper) in 2007.

Neil and I shared a “moderately” spicy Mangalorean fish dish (Mangalore is a city on the southwest coast of ).  His wife, being vegetarian, ordered a spicier mushroom dish which I barely tried as my tongue was lit on fire by the fish sauce.  I was easily able to drink a liter of water in addition to my Heineken.  Dessert in the form of decadent cold coffees with ice cream next door at Lavazza followed before I was dropped off back at Sunny's. 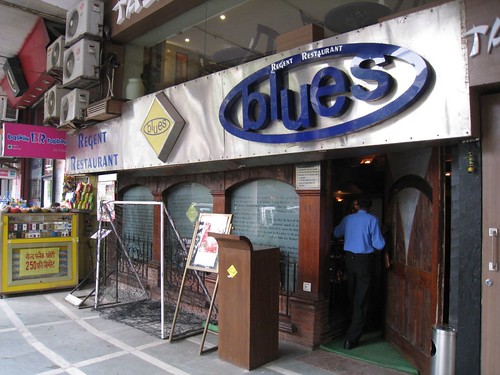 I capped off the night with a live viewing of the Euro 2008 final from at Regent's Blues.  The bar was filled with young Indians imbibing their share of alcohol and rooting for .