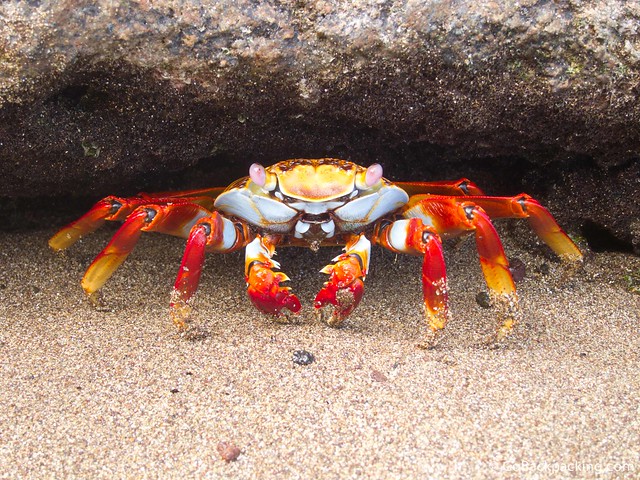 Floreana Island lies about a 5-hour cruise west of Espanola Island, where we'd gone swimming with sea lions the day before.

After taking a typical breakfast of eggs, bread, fruit, coffee, and juice at 7 AM, we took the pangas ashore to Green Beach. From there, we went for a short walk to Flour Beach, where we saw some fresh Sea Turtle tracks in the sand. 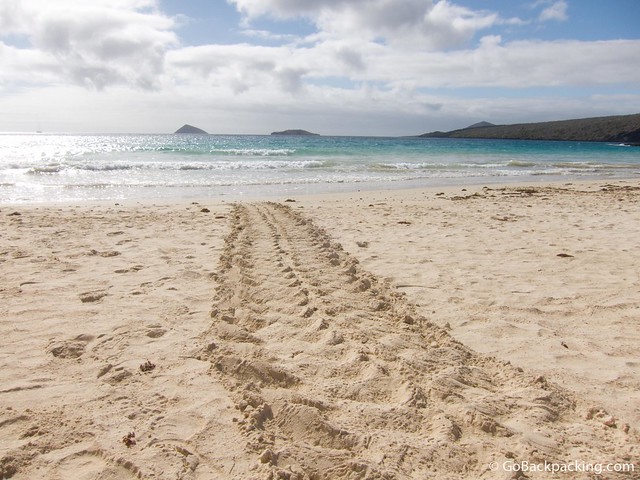 The turtles come ashore at night to lay their eggs on the sand dunes. They can lay about 100 at a time, which is necessary given the high mortality rate of the little guys.

If they're not eaten before they hatch, then they face flying predators picking them off on the way to the water. If they make it that far, there are plenty of sea creatures ready to eat them too.

Of the 100 eggs laid, one or two turtles may be lucky enough to reach adulthood, and lay their own to continue the cycle.

Walking along the water's edge, we also saw some small stingrays. 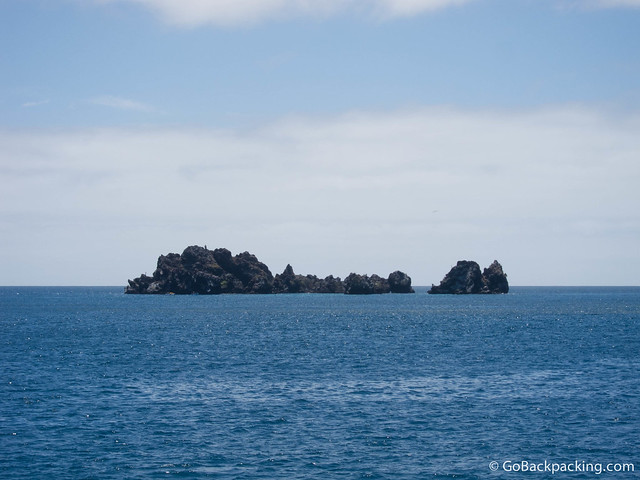 Devil's Crown is a popular snorkeling spot off Floreana Island

We took the pangas back to the yacht where we donned our wetsuits, picked up our snorkels, and then set off for the nearby volcanic outcropping known as Devil's Crown.

The current was especially strong here, so once we jumped in the water, all you had to do was relax, and let it sweep you around the rocks.

The coolest thing I saw on this snorkel was a Blue Footed Boobie dive-bombing the water.

I was looking underwater when I saw something dive down straight in front of me. It was like a spear entering the water, and it wasn't until the bird was on its way back to the surface that I realized what was happening. 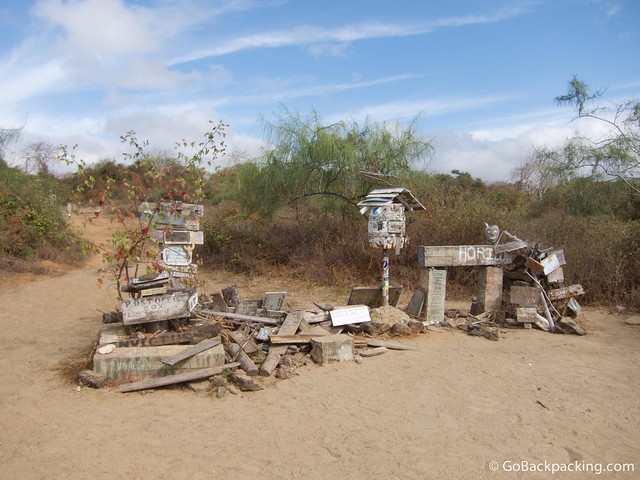 Visitors to Floreana Island leave postcards and letters in these boxes, hoping other travelers will carry them to their ultimate destination

Back on the yacht, we had lunch and cruised over to another popular spot on Floreana Island called Post Office Bay.

There's an old tradition of travelers leaving postcards and letters in the mailboxes here.

When you visit, you can either leave a letter or take one addressed to your next destination (or home country) for delivery.

Supposedly, there's no postage charged but I'd be surprised if any actually make it to their final destination for free.

We also climbed down into a lava tunnel for a short walk, which required the use of headlamps. 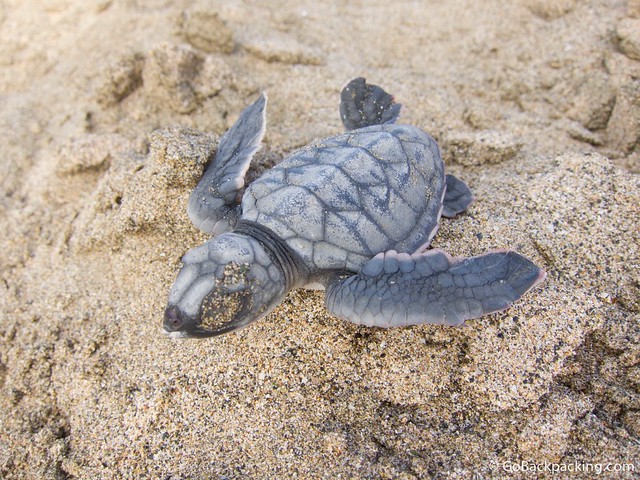 Hanging out on the beach of Post Office Bay after the lava tunnel, a few people went snorkeling.

It was the one time I decided to skip a snorkel, and everyone who'd gone into the water ended up seeing numerous Sea Turtles.

I was kicking myself then, and wouldn't see any turtles underwater for the remainder of the trip.

The lesson here is to do every snorkel, because you may not get a second chance to see certain animals.

On land, someone noticed a few baby Sea Turtles in the sand.

According to our guides, they had died on their way from the next where they hatched to the water.

Apparently the sunlight can be strong enough to kill them (via dehydration).

After the snorkelers returned to shore, we boarded the pangas back to the Estrella del Mar, cleaned up for dinner, talked about what we saw on Floreana Island, and looked ahead to the following day's encounter with the iconic Giant Land Tortoises.