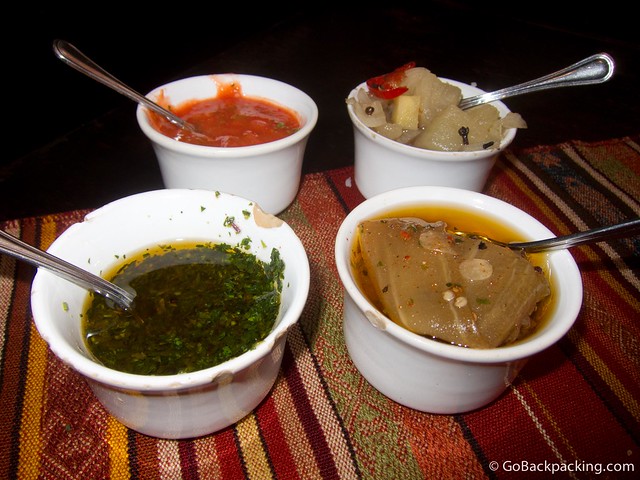 Four of eight homemade salsas that accompany the bread

My time in Ecuador was running out, and I'd yet to eat a meal that blew me away.

I looked up the best restaurants in Cuenca on Trip Advisor, and Tiesto's Restaurant was ranked number one, complete with glowing reviews.

It was a Saturday afternoon, and I walked over from my hostel without delay. Despite having read a few reviews, I had no expectations.

The business hours hung from the front door. I managed just to catch the end of the lunch service.

The restaurant was packed with a mix of Ecuadorian and foreign diners.

I made my way back to the hostess' desk, where I was asked to wait a moment while a small table was cleared.

There are two small rooms near the front of the restaurant, and a large one in the back, which includes the kitchen.

I was seated in one of the small front rooms. 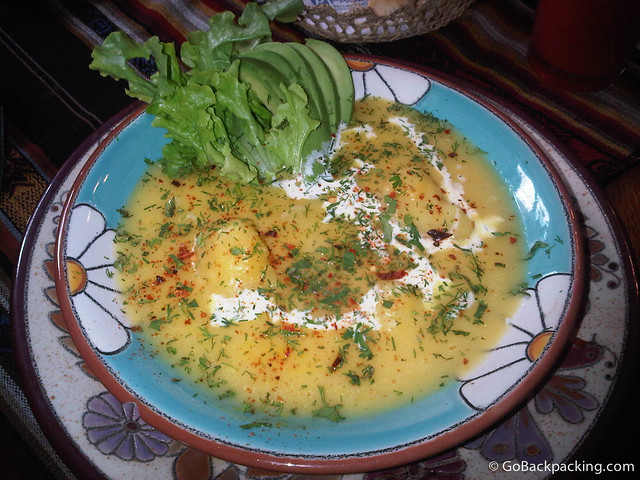 My waiter quickly gave me a menu, and when chef/owner Juan noticed me taking photos of it, he brought one over without the laminated pages.

Chef Juan, I quickly noticed, was a man about the house. While the kitchen was visible from the dining area, that wasn't enough.

He took time to visit every table in the restaurant, including mine.

Half the menu was dedicated to dishes served family-style (for two to four people), and there were a few vegetarian options as well.

Only later, as I was trying to enjoy every ounce of curry, did I realize how ambitious it was of me to order a thick, dense soup on top of the main course. 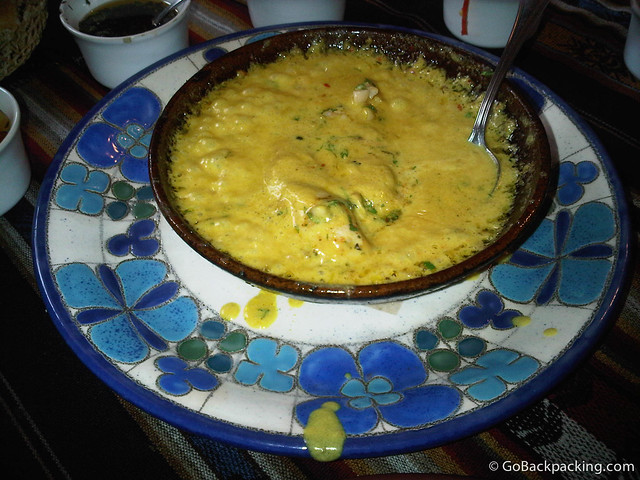 But before I could even get my hands on the soup, the waiter had brought out eight unique salsas and toppings for the complimentary bread.

I was immediately overwhelmed! What were they all? Even if he told me at the time, there were too many to remember.

I experimented: the pink sauce was spicy, the green was chimichurri.

I'd had it another time since, but Tiesto's version was by far the best, both in terms of presentation and amount of avocado offered.

Heaven on a plate. 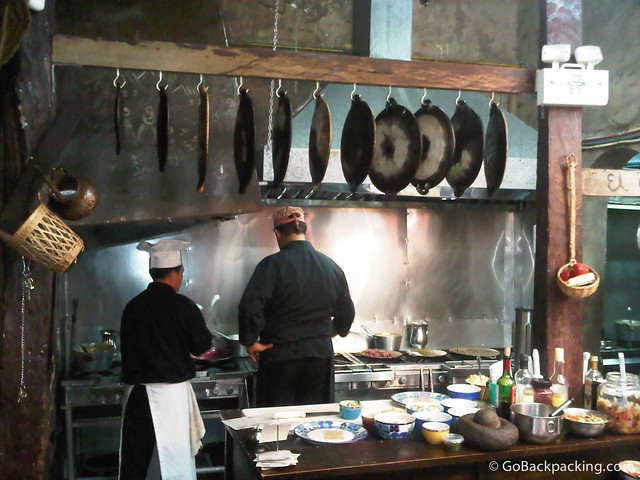 Juan, the chef/owner of Tiesto's, at work in the open kitchen

Stuffed is an understatement after eating lunch at Tiesto's Restaurant that Saturday afternoon.

By the time I was finished, the only thing on my mind was getting back to my hostel to lay down.

That's usually a feeling reserved for Thanksgiving and Christmas dinners.

As I was leaving, I passed Chef Juan, who was enjoying lunch himself now that the restaurant had closed.

We exchanged business cards, and I told him his food was the best I'd had in my two months traveling Ecuador.

Later that night, I was walking by the restaurant with Ryan when I looked across the street and saw Juan in the doorway.

He called out, inviting me back for langostinos.

I replied that I was leaving the city on Monday.

He suggested a Sunday lunch.

How could I refuse? 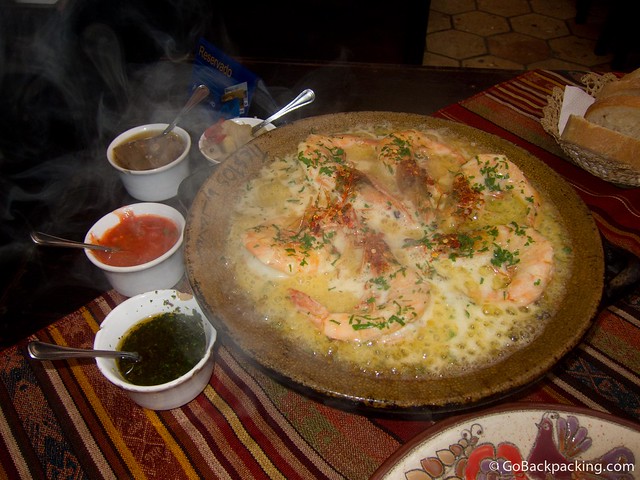 I slept late Sunday morning, on account of a late-night out in Cuenca's clubs, but the personal invitation from Chef Juan, and the thought of buttery langostinos were too good to pass up.

Once again, I arrived at the restaurant in the early afternoon, as lunch was in full swing.

I didn't know what to expect; it's not every day a chef invites me to lunch.

Upon entering the main dining room, I was seated at a reserved table right in front of the kitchen, generally referred to as the “chef's table.”

So this is what it feels like to be Anthony Bourdain, I thought. 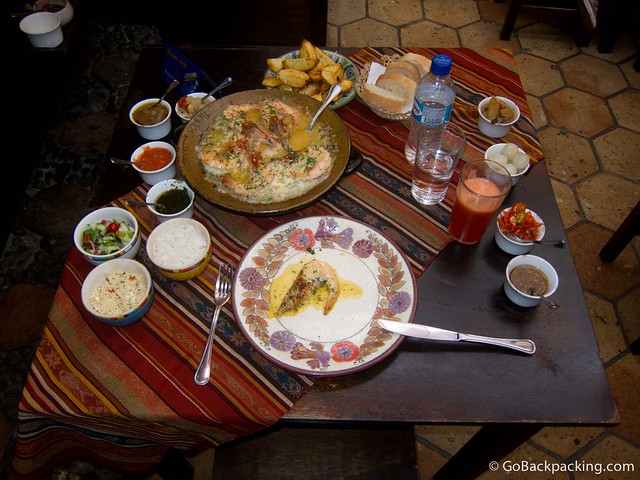 Langostino's for two (even though I was there alone)

The waiter handed me a menu, but Chef Juan plucked it out of my hands and put in the order for Langostinos for two, even though I'd arrived alone, yet again.

(The girl I was seeing was unavailable that day, and I couldn't call Ryan because I was out of minutes on my phone.)

The table was adjacent to the serving station for all those homemade salsas, so they were in front of me in no time. 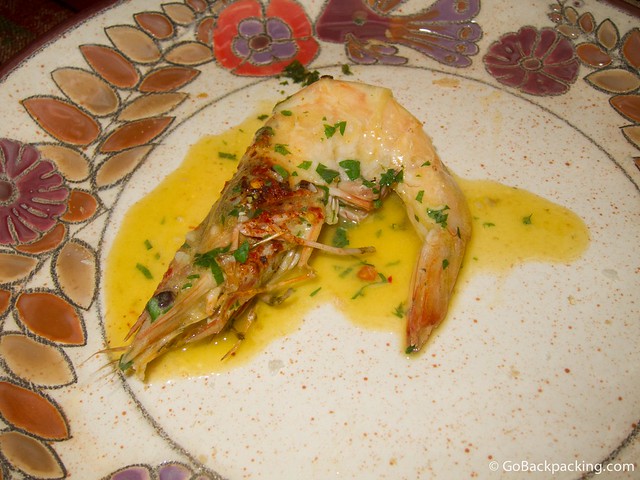 Not much later, a plate of 6 langostinos, bathed in bubbling hot butter, was placed before me.

Sides of potatoes, rice, couscous, and a cucumber salad were also presented.

I didn't stand a chance.

But I gave it my best shot anyway.

As I was beheading the langostinos, one by one, Chef Juan stopped for a moment to show me a tasty bit I'd been missing (near the abdomen, where the little legs connect).

I managed to down five of the six langostinos before tapping out as if I was moments away from being KO'd by butter. 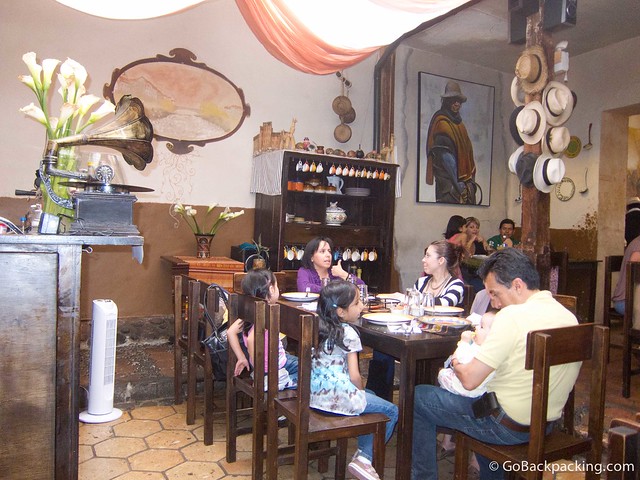 If I didn't pick up on the family atmosphere during my first visit, it was clearly on display Sunday.

Several families were there, kids and all, sharing a variety of the family-style dishes.

My two meals at Tiesto's Restaurant were amongst the best this year, ranking up there with delicious sushi in Kyoto and the molecular gastronomy at El Cielo in Medellin.

But it wasn't just the terrifically decadent food that made it a memorable experience.

The element that makes Tiesto's unique is Chef Juan, and his willingness to step out of the kitchen, and talk with his customers. 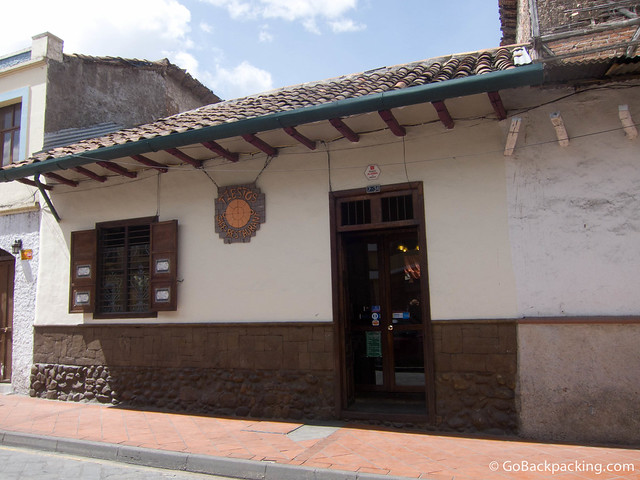 Note: My second lunch was compliments of Chef Juan and Tiesto's.

Man, that food looks scrumptious. I'd love to sample that Macadamia curry, it looks so rich, as do those langostinos!

Dave, everything looks delicious but the 6 giant langostinos would be the dish I'd definitely be after :)

Looks delicious! I particularly like the sound of the curry, I don't think I've tried a curry with macadamia nuts in it before.

Dean -- I've had a lot of curries, Thai, Indian, etc. And that one was among the best I've ever had. I imagine it wasn't at all a healthy dish, but so gooooood.

That's what I'm talking about!