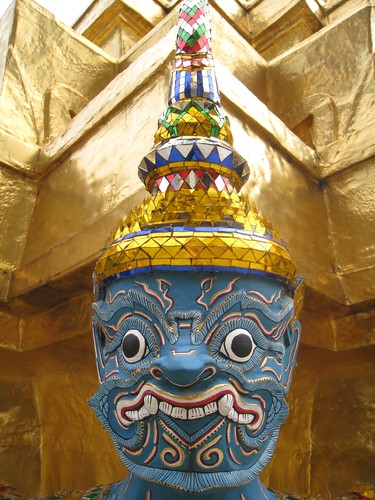 After 3 months in Nepal and India, Bangkok mine as well have been New York City to me.  Culture shock hit me hard.

The air-conditioning made 7-11's feel like blast freezers. Delicious Australian cookies known as Tim Tam's were easily available again (just like in Bali).  Long-flowing saris gave way to bare-as-much-skin-as-possible clothing.  The beer drinking began anew, as did my pilgrimage to “The Beach.”

The Grand Palace and the Emerald Buddha Temple

Next in the series, I recap my time on the beautiful island of Koh Samui in the Gulf of Thailand.

After living in Bangkok for 3 months I agree with you it's like night and day to most of Asia. Siam train stop with all the malls (for real like 6 in a row) with freezing AC guarantee to make THO a common site. The Western fast-food restaurants on every corner and the Brittany Spears music being played 24/7 made you feel like you were in the US a lot of the time...but it only took a second to realize that you were in Asia, as you could get DVD's for $3, food carts and garbage anywhere one could stake a claim for it and just try and buy something without having to argue for 10min on the price... were all reminders of why I had came. To soak it all up! lol