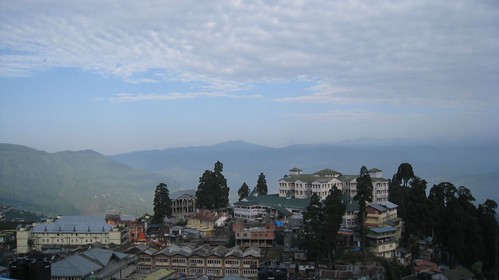 I spent my first full day walking around Darjeeling.

Thankfully, the city center turned out to be smaller than I expected, however you're often either walking up or downhill given the city is on the ridge of a mountain. 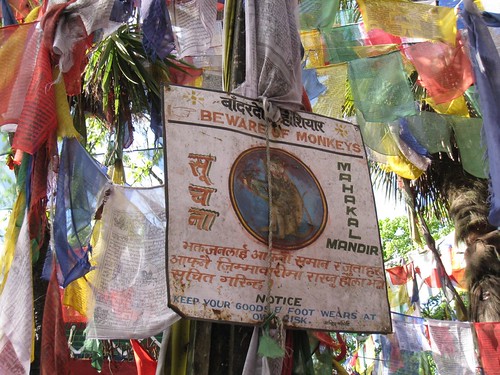 While I was trying to find Observatory Hill, a lookout point topped with Hindu temples and Buddhist prayer flags, I met George and Lee (or Leigh perhaps) from the UK.

We found our way past the monkeys to the top of the hill, though there were so many trees and flags you couldn't see much from it (a lower path that runs around the hill has the actual lookout point). 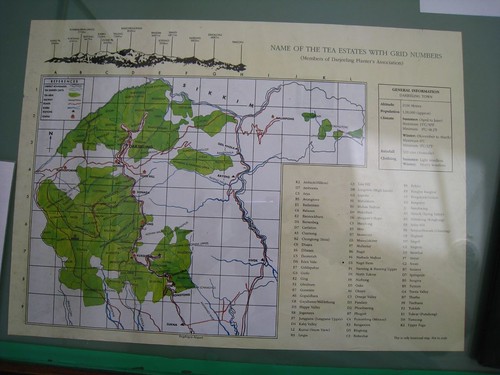 Since they'd been in Darjeeling a week already, they wanted to taste and buy some tea before leaving the next day.

We each bought a small pot of a different kind at Goodricke's, House of Tea. We made plans to meet up later for dinner at a Tibetan restaurant nearby. 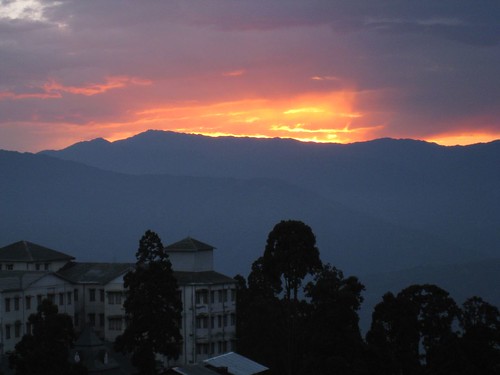 The sunset over the mountains that evening was amazing.

After dinner, I joined Viet and Richard (two guys we met at dinner) for a drink at Buzz, a bar in the basement of landmark bakery/restaurant/internet cafe Glenary's.

The cover band was awful, however I was up for a Kingfisher beer.

Unfortunately, they were all out, so I ended up with Foster's, while Richard opted for the ultra super strong (and I kid you not), He-Man 9000. Only in India! 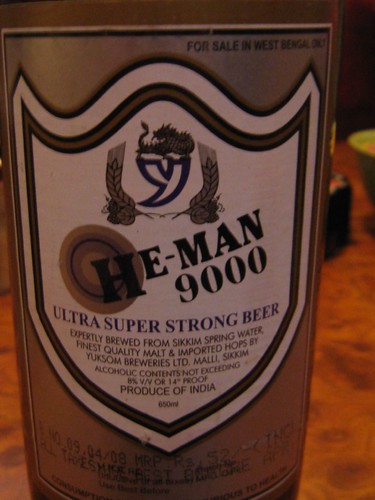 India is extraordinary beautiful, and especially Darjeeling!I have been to India so many times and I think the best place to visit in India is Darjeeling! if you are a nature lover, this place is great! My trip to Darjeeling from London was really very memorable..Darjeeling is a heaven and if you are a nature lover, you'll be delighted to see the magical snow leopard,the most magical animal on the planet in some of the remotest parts of this place.Also,you'll get to see hawks, red pandas,Himalayan bear!We kept seeing at the red Pandas for hours,it was really a wonderful experience!My maternal cousin has got married in India and she lives at Darjeeling, which is the most beautiful and serene place ever! The snow-covered Kanchenjunga looks majestic and the lush green mountain slopes, they just look fabulous! The best season to visit Darjeeling would be in the month of December, when the sky is really blue and the air feels so fresh!I just love this place!

Using a Canon 800 series - the one with the 3-inch display screen. 8 megapixels. 2.7 or 3.7x optical zoom I believe. Very nice but scratches easily. Impermanence at work!

I've been gone 6 months now, and while it sounds like such a short amount of time for the ground I've covered, it really feels like 2-3 times as long living it. I don't feel like I've been rushing through places (unless I've wanted to).