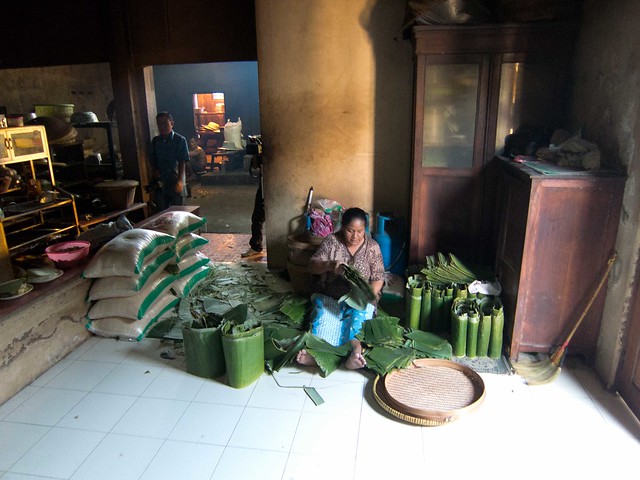 The heat from the flames was almost unbearable, the lack of air circulation stifling.

A surprisingly tall, young, shirtless man in flip-flops entered the room. Male or female, it was hard not to notice his abs, covered in sweat, and seemingly carved from stone.

He deposited a shovel full of red-hot coals underneath one of the many large cooking pots, without a word, and left the room again.

Walking into the kitchen of Gudeg Yu Djum, a famous restaurant in Yogyakarta was a walk back in time. 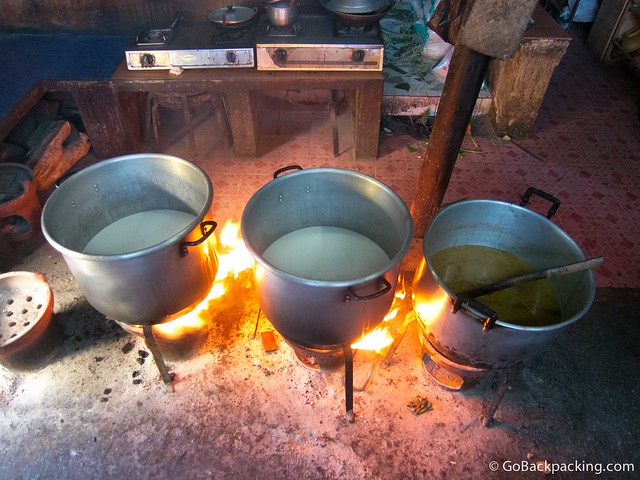 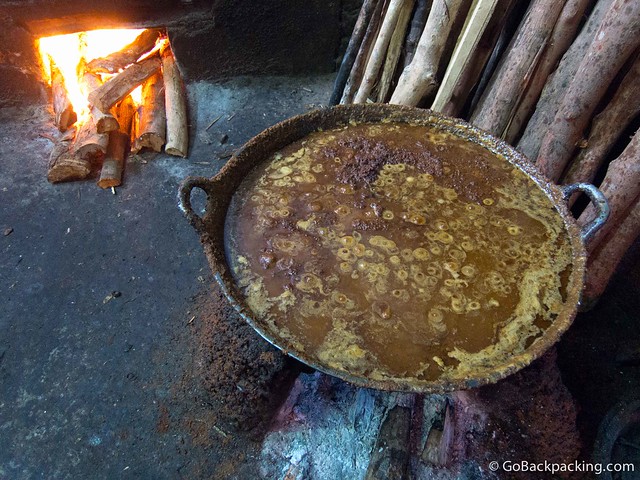 Arek is a mixture of salt, brown sugar, and coconut milk, which is combined with the jack fruit

Known for producing gudeg, a local delicacy of young jack fruit mixed with coconut milk, palm sugar, and spices, Gudeg Yu Djum had established itself as one of the top restaurants in Yogyakarta for the dish.

Gudeg, which is produced 24 hours a day, seven days a week in the location we were visiting, is then shipped to additional restaurants throughout Yogyakarta.

When I signed up for a food tour, I expected we'd visit a local market, photograph some vegetables, and maybe stop by a few shops.

Standing amid a working Indonesian kitchen, wearing flip-flops myself, as hot coals were being shoveled, and large cuts of wood were used to keep the fires going, wasn't even within my realm of previous experience. 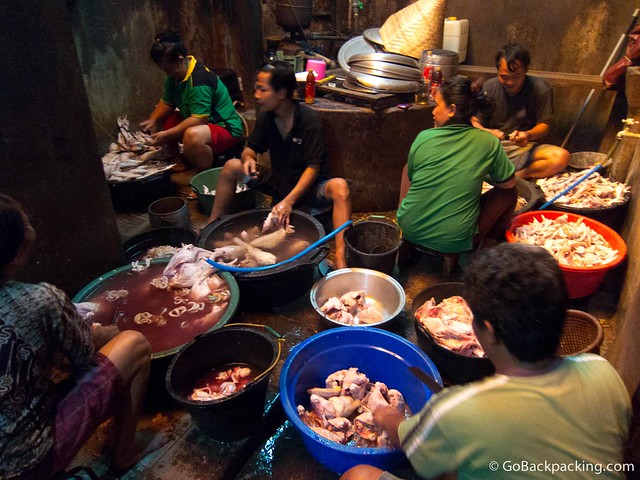 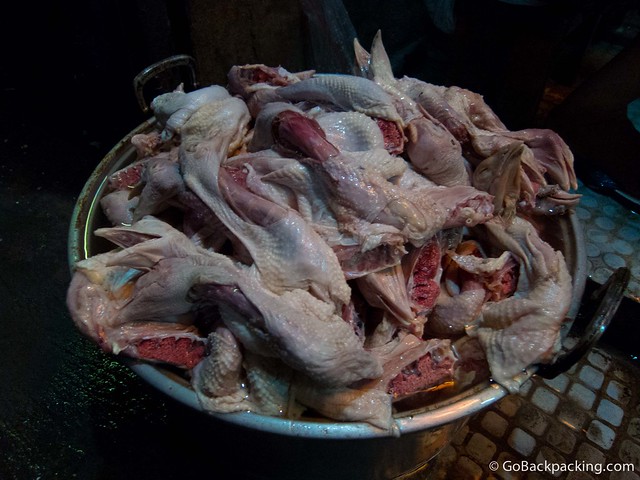 A pot full of chicken heads

The whole scene, unfolding before me, was raw and fascinating.

In the largest room, various pots and cauldrons were used to boil and prepare the coconut milk and spices.

Meanwhile, in a smaller side room, no less than six people were sitting in front of plastic buckets, dismembering chickens with casual efficiency.

The air was thick and heavy, and there was little spare room to stand and observe. 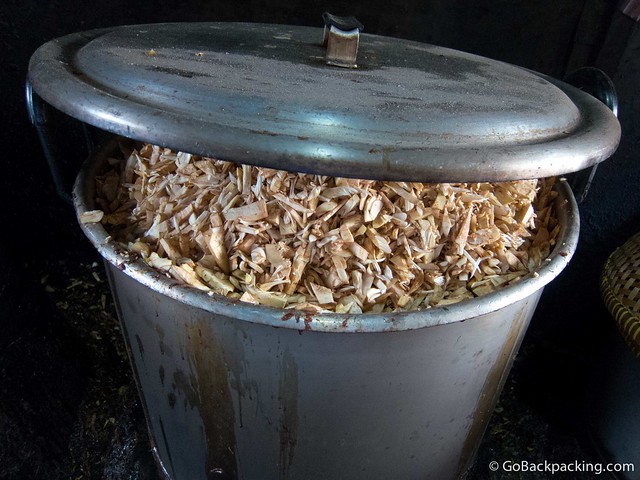 A pot of jackfruit, the main ingredient in guleg, cooks for 24 hours 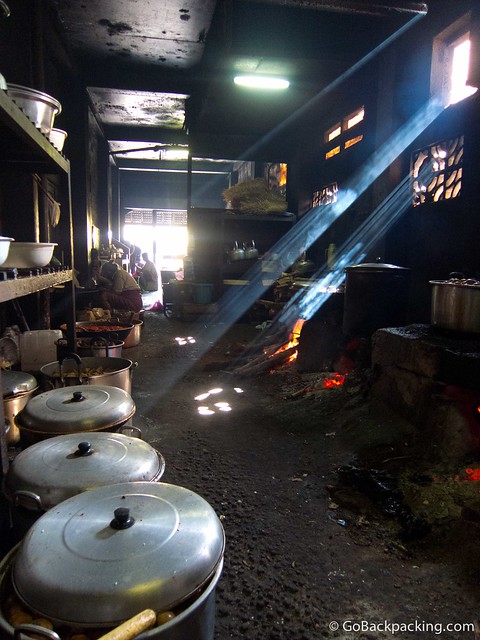 Rays of sunshine cut through the smokey kitchen

On the other side of the chicken room was a rectangular room with beams of sunlight streaming through. This room captivated me, even more so than the others.

As I repositioned myself to take photos, I could feel the heat from the open flames against my back.

I tried to picture myself in the position of those working in the kitchen every day, day after day, producing the best gudeg in Yogyakarta, if not all of Indonesia.

Surely they felt a sense of pride working there, but you wouldn't know it just from watching. 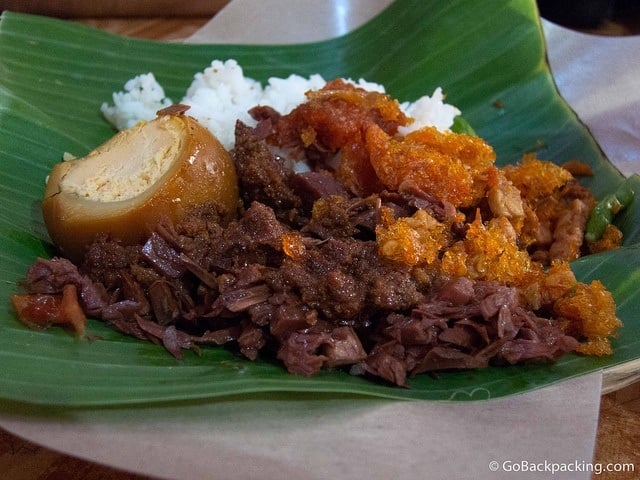 The finished product: Nasi Gudeg Telur (rice, jackfruit, and egg). The goden yellow bits are krecek, made of beef skin.

The rectangular room was especially smokey and seemed to be the central kitchen, where most of the cooking was done.

When I noticed the others in my group were no longer around me, and I was the only one still taking photos, I retreated to the front dining room.

There, on the table, was a green banana leaf with a fresh serving of gudeg, along with the regular accompaniments of white rice (nasi) and a hard-boiled egg (telur). Also, there were golden bits of beef skin (krecek).

After watching the hard work that goes into the production of this local favorite, I was anxious to try it for myself. It was sweeter than I expected, with lots of flavor.

Instantly, I understood its popularity.

Nasi gudeg telur and krecek is my favorite food. Yummy...

It's always good to see foreigner enjoying my hometown. Just info for you guys, actually there are two mainstreams of Gudeg: the Jogja type which is sweet and the Solo (sold in Solo city, an hour drive from Jogja) which is salty. And also in Bantul, a regency in Yogyakarta Province, there is a delicacy called Gudeg Manggar, which is a type of gudeg made from Manggar (the flower of coconut tree, which also worth a try.

Great before and after shots. Though the latter is much more appetizing.

How fun Dave! I loved the food in Yogya too. My last night there my driver and his wife took me out to their favorite local restaurant for awesome Crispy Duck. Also discovered Rabbit Sate that is a street food specialty. Yum yuym yum!!!

I missed the rabbit sate, but after the gudeg, we went to a place known for its lamb satay, which was pretty good. Chicken is still my favorite though, and we got plenty of it throughout the trip.

Awesome food story Dave, I can just about smell those humid and flavorful aromas revolving around that sauna of a kitchen. The finished product looks delicious!

Thanks Mark. I know you visited Yogya too. Do you remember trying gudeg?