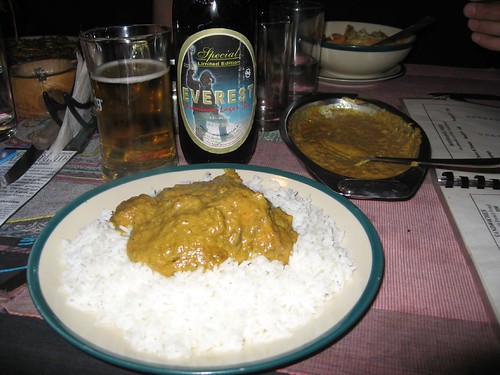 I went to Moondance Restaurant with Rob and Rosie and two other kayakers joined us – Mike (France, 36) and Vasiili (Siberia, Russia, 32). I was surprised to hear Rosie is only 23 – she's kayaked since 11 or 12. Quite adventurous! She was cute – and I got a good vibe – not even sure she's with Rob, but they're off on their last river-run today so that's that. I had chicken tikka with rice and naan which was very good. I ordered an Everest beer, 5.5% alcohol in a big bottle. A good deal for $3 but I'm done with alcohol till the end of the trek – I need all the energy I can muster. 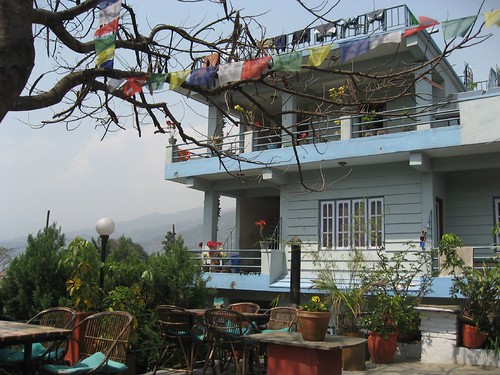 I Google'd Rob and Rosie – I couldn't help it. Indeed they're pro's, or close to it! I love meeting cool, down to Earth people doing fantastic things. I wonder if anyone says that after meeting me? 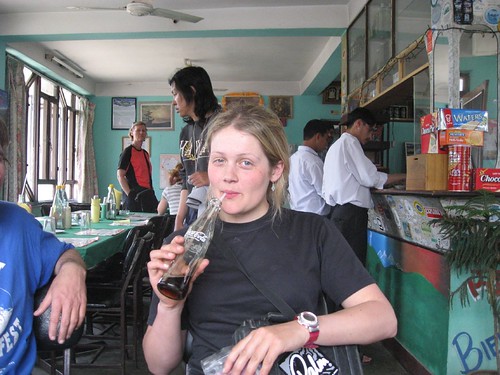 Internet too slow to deal with photos now…or ever in mass.

Charlie said a new Asus AC Adapter will run $50 including shipping costs (from Chengdu). That's enough for me to think twice. Lug my impotent laptop around until India, or suck it up and buy the adapter?

An hour ago I noticed winds rustling the leaves on trees. Now I just heard rumbles of thunder. Dark clouds are coming. I have a corner room with windows facing East and South. 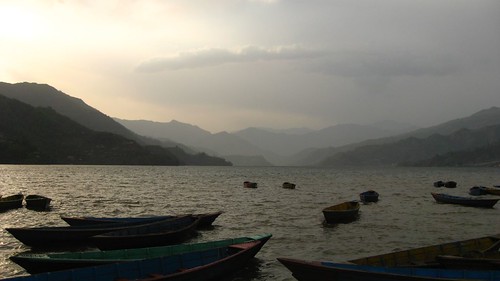 I walked to the lake shore – very scenic. Sun was setting over mountain top – very bright. Abdominal cramps are stifling my desire to explore. I just realized ordering curry and beer last night wasn't a good idea, nor the veggie curry I had for lunch. If I get dinner, it'll be pasta or plain rice. I may just snack tonight, lay in bed, and read “Annapurna” – the story of the first ascent (of a peak over 8,000 meters) in 1950. The power is back on but via generators so the cable still doesn't work.

Surprise! On my first night in Nepal I learned that 4-hour power outages are scheduled in Kathmandu, and twice that time is scheduled in Pokhara (though split between the morning and evening). Most business, especially those catering to tourists, use generators when there is no electricity. Still, you're not always be able to get that fresh fruit drink at a restaurant.

I find the experience adds to the charm of Nepal. There is something uniquely romantic about the atmosphere once the electricity goes off.  Maybe it's all the warm light from the candles.