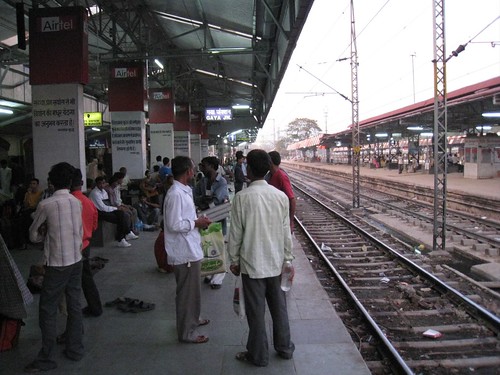 I was beyond pleased to see my autorickshaw driver awaiting me at 4:20am outside the Karma Temple's gate. I shook his hand, he started the motor, and we were off in the dim pre-dawn light. I realized my decision to take the early train to Varanasi meant a peaceful, cool ride back to Gaya which was in stark contrast to the ” like a bat out of hell”? rickshaw ride to Bodhgaya two days earlier.

The 5:15am train arrived on time, and I boarded my 3AC carriage to find most people asleep. I heaved my pack onto the upper berth, grabbed a pillow, turned on my mp3 player, and began to enjoy the air-conditioning.

After a few hours, I descended from my perch to a friendly Indian family occupying the other berths in my section. I asked one of the guys to help me ensure I got off at Varanasi, which he did. Otherwise, I watched the farmland fly by, and the mom playing with her little daughter on the seat opposite me. At one stop, a young child missing his left forearm (below the elbow) entered the carriage and approached me for money. I nodded ” no”? and averted my eyes. He took care to point at the scars with his right hand. An older Indian guy next to me said something to him, yet the child just kept repeating ” money”? and holding his scarred arm in front of me. I didn't relent, and the mother eventually gave him a one rupee coin. Satisfied, he left. 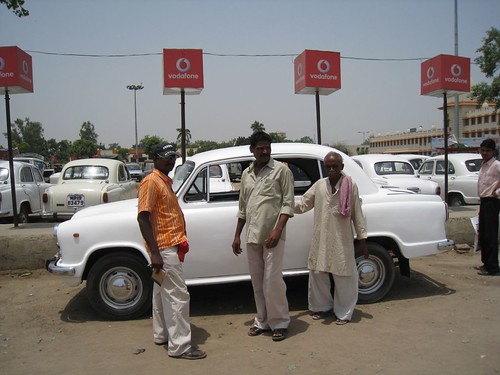 We passed over the Ganges River as Varanasi approached. The guy who was helping me warned that it was ” terribly hot”? outside as the locals could be seen with their faces and heads covered with long scarves.

We pulled into the station and I stepped into the steamy sauna that was Varanasi. I made my way out, stopping for a map and hotel recommendation at the tourist office (really just a guy at a desk). I grabbed one of the old white taxis to Hotel Buddha. The driver suggested it was about 42 degrees Celsius (~108 degrees Fahrenheit). I had already decided to splurge and budget around $20/night for a nice room with air-conditioning and other appreciated amenities (private bath, cable TV, lots of light, balcony, generator for power outages). Hotel Buddha wasn't in the old city along the ghats, but I only expected to spend two nights in Varanasi so paying for local transportation didn't bother me. 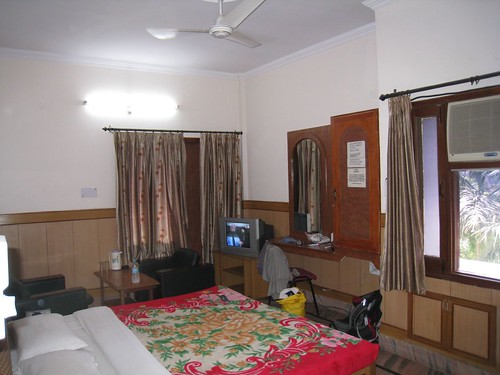 I showered, ordered room service (tasty chicken chili w/naan), finished Khaled Hosseini's ” A Thousand Splendid Suns”? which had only been given to me a few days earlier (amazing and sad story based in Afghanistan), and waited for the sun to set. My first mission was to secure my train ticket out of Varanasi, so I walked back to the train station along a dirt road under construction. A young Indian man helped me out when he saw another guy couldn't understand my question about directions. The young man walked his bike alongside me, surprised I wasn't in a rickshaw. He said I had a ” good heart.”? He was headed to the train station too, and as we prepared to cross the two busy intersections, motioned me to stand behind him (basically, as a way to protect me). While he eventually disclosed he was a driver, and was probably trying to secure my business the whole time, he also helped me survive the 15-minute walk to the station, and for that I gave him a sincere thank you. 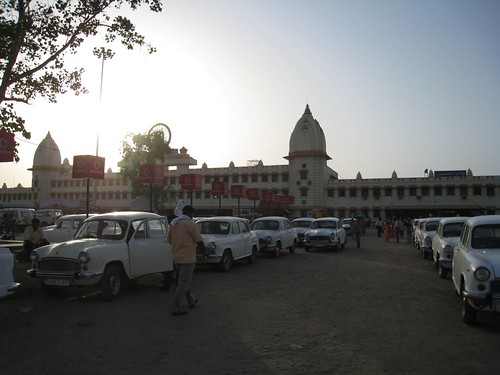 The foreigner's ticket office was hot and filled with people. It is exactly what you would imagine if you closed your eyes at home and pictured a ticket office in an Indian railway station. I was thankful to buy my next 3AC overnight train ticket (to Agra, home of the Taj Mahal) on the day I wanted. I took a bicycle rickshaw back to the hotel, which was almost as crazy and vulnerable an experience as walking. 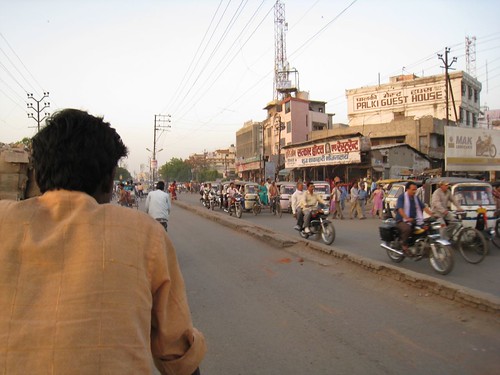