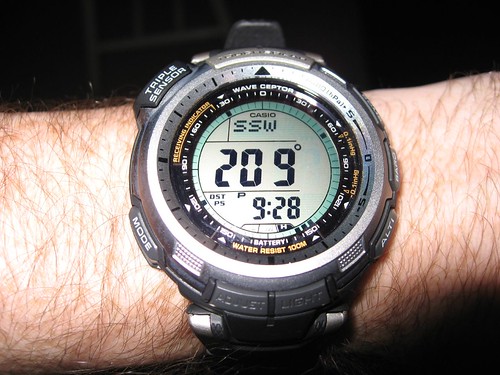 So I received my new Casio Pathfinder watch 3 days after I ordered it – awesome turnaround time from the vendor (via Amazon.com)!

It feels great on my wrist and it's noticeably thinner than the previous model I had tried on.

Plus, it doesn't feel too heavy.

I went with the black version, as I sort of liked the look of it more than the alternative green version, however, my model has a silver band that wraps around the watch face that is quite shiny.

This was something I wanted to avoid, as I'll be traveling to poor, third world countries next year and I do not want to attract thieves or unwanted attention (I may well attract that just by being a white American tourist, I realize).

So, my question is do I return the watch in exchange for the non-shiny green version?

Or do I stop worrying and be happy with my new toy?

PS – I know turning the watch face over to the underside of my wrist is one way to make it less visible, and I recognize the most prudent thing to do in some areas (certain African countries for example), may be to remove it altogether.

I'd keep it, once you get some travel grime going, the shine will be gone! The watch will probably get a little scuffed up, too.

I remember getting new leather nike or adidas shoes in high school and scuffing them through the dirt so they would get that worn-in look right away. It was too embarrassing to have those shiny-white shoes. You could try that with the watch. :-)

I think I'll take shine to grime any day! Yes, I knew I rejected the green one for a reason - I require a little pizzazz!

And the mirror finish may come in handy if I have to signal for a rescue chopper at some point. :)

Good advice. Annika - I trust your fashion sense more than mine! ;)

keep it. its big enough that even if it was green people are gonna notice it. dont worry bout it.. wear long sleeve light cotton tshirts and nobody will know

Good advice. Annika - I trust your fashion sense more than mine! ;)

I say keep it. I think your watch will be the least of your worries and taking it off completely may be the best way to go anyway.