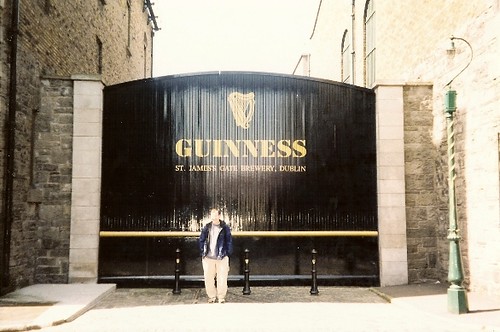 I got a bed in the first hostel I went to. I'm really beginning to doubt “Let's Go” when it comes to accommodation warnings during the summer.

I dropped my stuff off and went for a walk around the town.

The city is quite small for a capital; the average building is only four or five stories tall. St. Stephen's Green was really beautiful.

The weather this morning is quite cold. In fact, without my long pants and jacket, I'd be really cold.

I ate breakfast in a Johnny Rocket's diner (which I was surprised to come across).

For lunch/dinner, I went to the Porter House (my first pub in Ireland) and got a cheeseburger and two house pints for $15.

Moderation is hardly a choice for me while drinking English and Irish beers.

They are very filling, and I can't seem to drink them very quickly. This made me reflect on the cheap American beers.

They are so watery; it is no wonder people binge drink. I really drink Dublin and Ireland.

At night, I went to a few pubs, including Fitsimmons, where I stayed for the Trad(itional) Irish music and Set Dancing.

I knew what I would get with the band, but the three female dancers surprised me.

The bottom of their shoes have metal plates (like tap dancing), and it creates a thunderous sound when they stamp down on the small wooden stage.

They took turns doing solos and then would come back into unison. Meanwhile, I was only able to drink one more pint.

By 11:30 PM, I was halfway done with my pint of Breo (White Beer by Guinness) when the music stopped. I felt really guilty leaving the beer.

Like London, Dublin feels quite safe. The cops don't carry guns here either.

About five minutes after I got into bed, a girl came up (to my loft) and said she had just been assigned my bed.

After she went down to inform the guy that I was there, the guy came into my room and turned the lights on, and said I hadn't been put in the computer. I really don't know what he wanted from me.

Also, I did the rest of my laundry today. My sneakers smell so bad now that when I wear clean socks for just a bit, they stink by association.

This morning I headed out toward the Guinness Hopstore. The self-guided tour cost $4.50 (w/student discount).

It was a little less flashy than the Heineken tour, and you only got one pint of beer at the end (instead of all you could drink in a time period). They also seemed to have a lot of gift shop business.

After that, I headed toward Trinity College. The inner courtyard felt like an oasis/refuge from the noise and traffic of the city.

I made the stupid mistake of buying tickets to the “Dublin Experience” film and the Book of Kells.

The movie was really corny, and I didn't learn too much. The Book of Kells was thought to be one of the most beautiful manuscripts (and at least 1,000 years old).

Anyway, it seemed ok, but the pages on display didn't seem any more impressive than other manuscripts I've seen. So I went back to the hostel for a rest.

I headed out to get a head start on the night's drinking. I've started to collect coasters from all the bars. Back to Temple Bar (a cultural/hip district in Dublin).

I bought a ticket for the musical pub crawl. It was led by a guy (Anthony) who sang, played the guitar, and the bodhran, and a girl (Nell) who sang (one song) and played the fiddle.

She was cute too. Pierced belly and tongue, with a tattoo on her upper left arm, and short black hair.

She chain-smoked like crazy. There were a lot of people on the crawl. We went to three bars and sang some songs.

I managed to get quite drunk. Drunk enough to buy their CD for ten pounds ($15). For that price, I got it signed!

Afterward, I hung around and talked (and listened) to them for a bit. I asked for recommendations on where to go.

Nell mentioned Clare and Kilkenny. About one place, she talked about swimming pools that formed on the shore during low tide.

There were all different types: naked guys, kids, tourists, etc. I left shortly thereafter, at which point I forgot everything she had said so enthusiastically.

I decided to leave for Kilkenny in the morning.