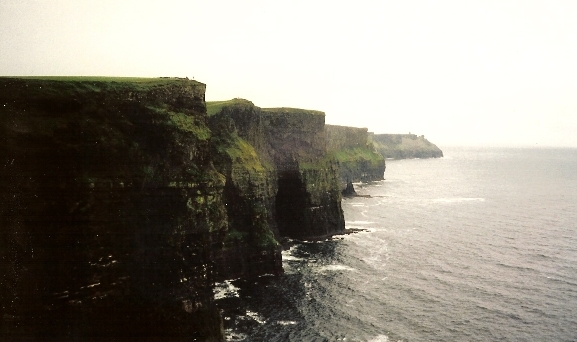 I decided to spring for another bus ticket ($15) to get to the Cliffs of Moher. The bus trip went by fairly slow. We got to take a car ferry for 20 minutes too. It turned out that the bus changes drivers (and has a layover of 1 1/2 hours) at the cliffs. This ended up being the perfect amount of time to explore. When I got there, the weather (not the sky) was clear. Then, fog and clouds covered up the cliffs, and then it cleared a half hour later. As I was leaving, the visibility was less than 100 feet. I thought this constant change created an interesting effect. Though I was a little weary, I decided to walk along the edge of the cliffs. It was very exhilarating, and I was proud of myself! It was the first chance on my trip that I got to climb around/up and down rocks. The scene reminded me of Friedrich's “Monk by the Sea,” a very spiritual painting showing man's insignificance in relation to the size and power of nature. I took several pictures, but there is no way they will be able to convey what it felt like to be engulfed in the mist of the . 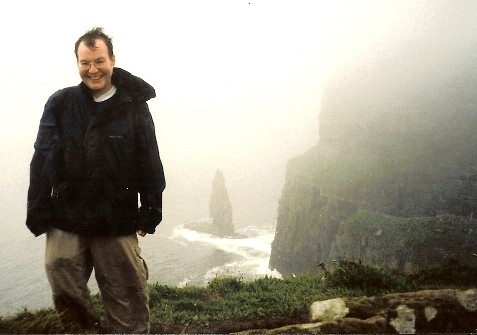 I ended up hopping off the bus in the lower of , the unofficial trad music capital of . I walked down to the shore where I got my first glimpse of the small ferry I would be taking to the . It was being tossed all over by the sea. At this point, I seriously considered changing my plans. I decided to think about it. Then I decided that if I never got the chance to come back, how could I skip these islands. Plus, if I didn't go, I would have to leave Doolin because there would be nothing to do during the day.

On the way back from the coast, I stopped at O'Connor's Pub. This was the first of the two venues for the “world class trad” music I would see. It was populated with a good mixture of locals and tourists. I decided to check out the other pub in the upper village (15 minute walk). McDermott's had about ten to fifteen people (including staff). The decor included signs like “if I wanted to hear an asshole, I would have farted.” The other bar had foreign currencies and police/fire badges on the walls. At this point, I decided to hit O'Connor's for the night. I ended up not getting a seat, it was crowded, and I was kind of bothered by the fact that they didn't do any singing. I left early, though the music was good (and original too).

I woke up and headed down to the ferry dock. The sky had cleared overnight, and it was only partly cloudy now. But, the sun was shining down on me. I boarded the ferry, noticing the water on deck. I ended up sitting on the side of the boat that got soaked by the rough Atlantic waves. After about ten minutes of getting wet, me and everyone else in the immediate area moved. I sat (alone) on a bench near the one I was just on. I was surprised at how well I felt. And the seas were quite rough, the tiny ship was tossed. Water rolled back and forth across the deck. I didn't mind getting wet. It all added to my rough seas experience. I know the trip out to the islands was bumpy because on the way back, the water was still, and the ride was smooth.

About ten steps after I got off the boat, I was reeled into a tour bus. I got in since it was going to all the attractions ($7.50). It turns out that most people bike the island. And at ten miles long, it is not too bad for a day's workout. The whole island was covered with miles of stone walls. The amazing part was how the rocks were all placed and balanced by hand. The fort was said to be at least 4,000 years old! I tried on a $135 Aran sweater, but didn't come close to buying it. Just too expensive. I realized when I got back to the hostel that I was sunburned (in , no less). I took a three hour nap. 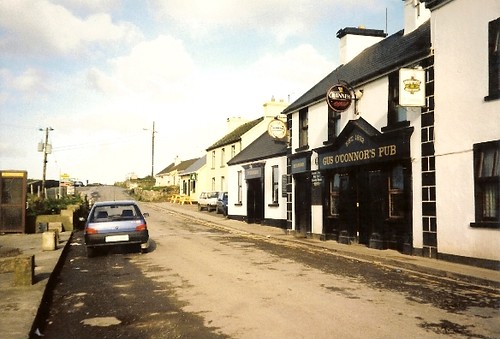 I only got out of bed to check out McDermott's. When I got there (after checking out an amazing sunset), I was so tired. Even more, I had no money, only enough for a pint of cider. The band was really good, and for the first time, I saw a person playing a pipe/flute. Six people in all. There was no singing after the first two songs. Once again, I was forced to stand due to the crowd. Tired, I returned to the hostel for sleep. As I walked back, in the dark, noticing the stars, I thought about how little had changed in that Doolin pub. There were travelers in the past, who could stop for the night and be entertained by a trad band. I thought about this for awhile, even as I went to sleep.

Read more of my adventures in Europe.