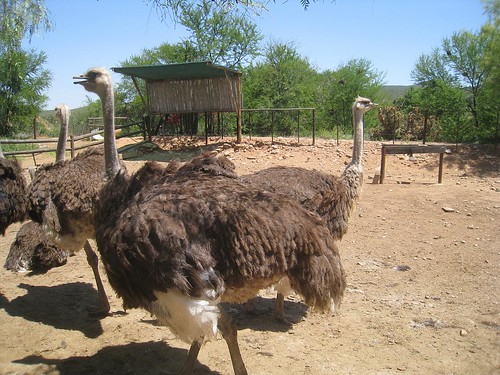 The caves were a nice warm-up to the main event, ostriches.

Outdshorn is the self-proclaimed ostrich capital of the world, and they are a popular draw.

Already having consumed ostrich steaks and sausage for dinner, and their scrambled egg for breakfast, I was excited to learn more about the largest bird on the planet. 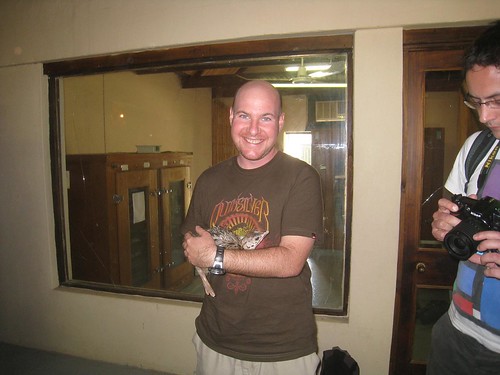 Our guide started off with a short lecture. He looked dressed to lead us on a full-blown safari and was quick to make jokes, picking on a straight-faced English guy in particular (dubbed Mr. Bean).

After the lecture, we had the chance to see hatching babies in an incubator and hold a one-day-old bird.

Then, we headed outside where several of us, including yours truly, stuck a bit of feed in their lips and allowed the ostrich to pluck it out.

In effect, an ostrich kiss. Yuck! We got to feed the ostriches and see a male flap its feathers in a typical” I'm ready to mate with the next attractive bird to walk by” manner. 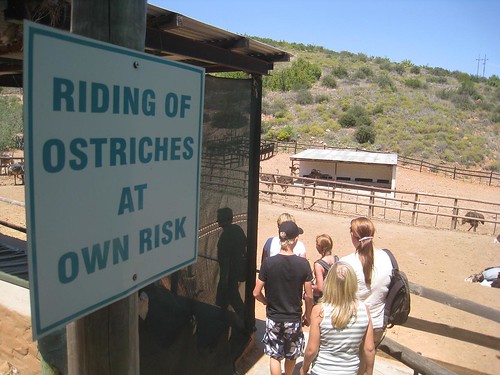 The odd desire to ride a yak lead me to the high-altitude Tsomgo Lake (12,400 feet) in Sikkim, India, so if you think I'd turn down the opportunity to ride an ostrich, you're sadly mistaken.

Four girls rode first, so I had a preview of this unique experience.

To my surprise, I was the only guy in our tour group to saddle up. I think the others were scared, because who wouldn't want to ride a big funny bird!

The process involved one of the real jockeys (yes, there is such a job) rounding up an ostrich in the pen, putting a bag over its head and leading it to the V-shaped mounting area in front of the stands.

I climbed aboard, gripping each wing near the front, and wrapping my legs around its front chest. The bag was then pulled off…. 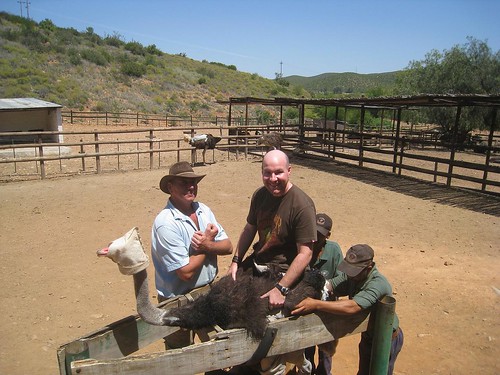 …and away we went! The bird ran around like a chicken with its head cut off, moving in a counter-clockwise direction around the pen.

Two jockeys ran behind it (and probably steering it to some degree), ready to catch me by my arms when I lost my balance.

I already knew how funny the scene appeared from watching the ladies, however, the perspective from atop the bird is truly hilarious.

You're hanging onto its wings for dear life while it bounces around, its neck swaying from side to side in front of you.

Taking into consideration the info delivered in this article I get to various advantageous final thoughts. I would like to value your time incurred in writing.

Heard about this site from my friend. He pointed me here and told me I'd find what I need. He was right! I got all the questions I had, answered. Didn't even take long to find it. Love the fact that you made it so easy for people like me. More power

David I laughed soooooo hard when I saw this video

David I laughed soooooo hard when I saw this video