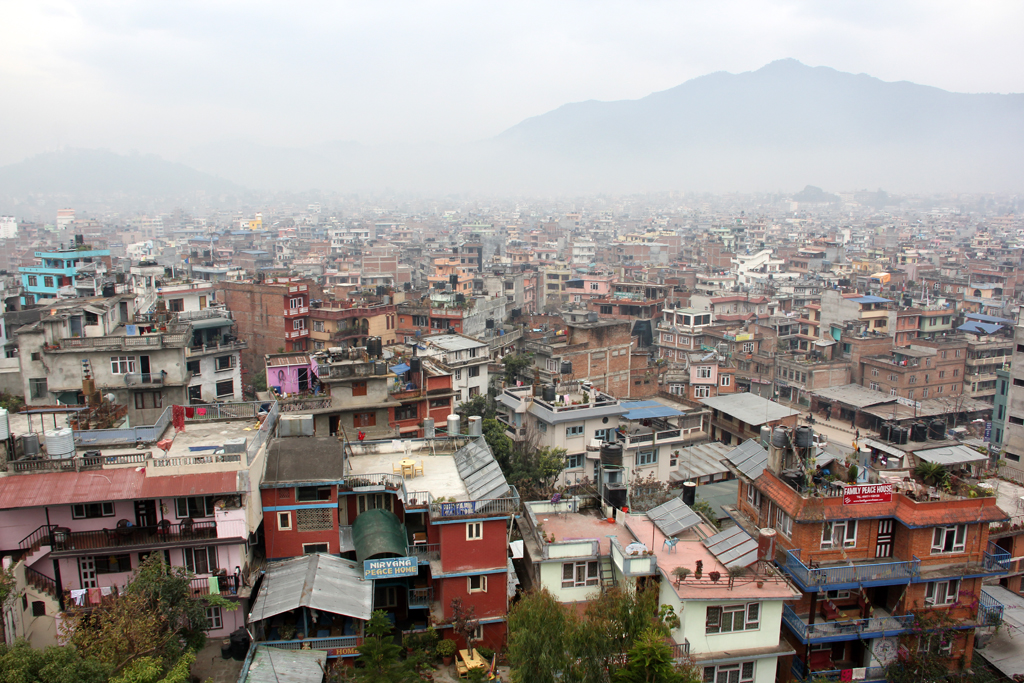 [S]ituated within a giant valley, Kathmandu is the largest and capital city of Nepal.

It's a busy city that has numerous attractions and plenty of interesting areas of town to explore. 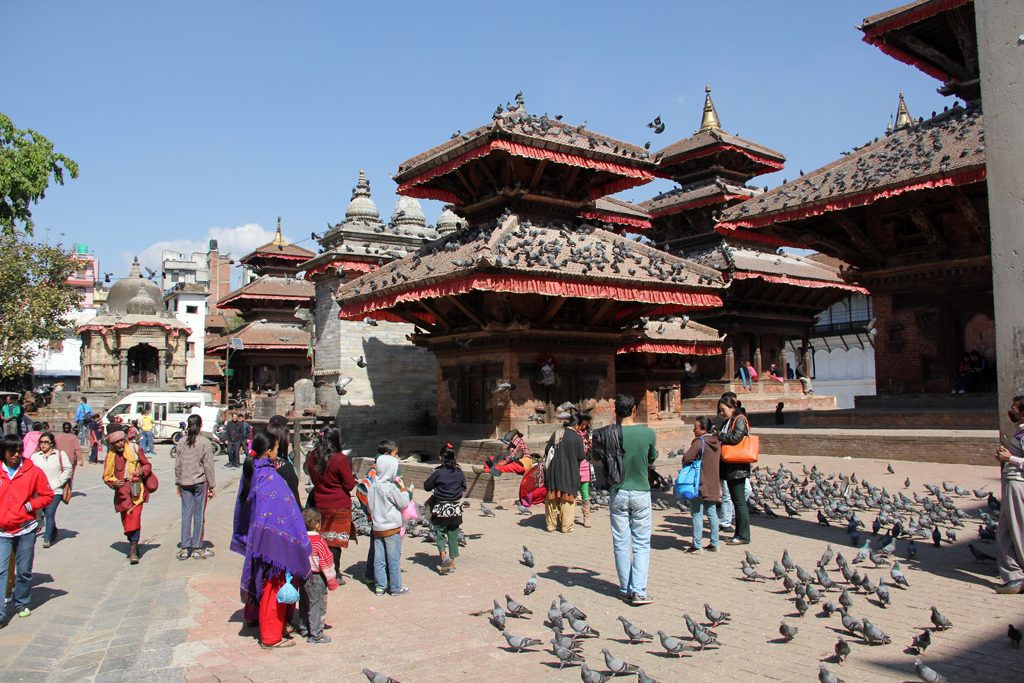 Kathmandu's Durbar Square, an old plaza area near the former palace,  is one of three similar Durbar Squares within the valley.

Right in central Kathmandu, the Durbar Square is a historical area packed with interesting museums and structures.

Many local Nepalis hang out around the square. 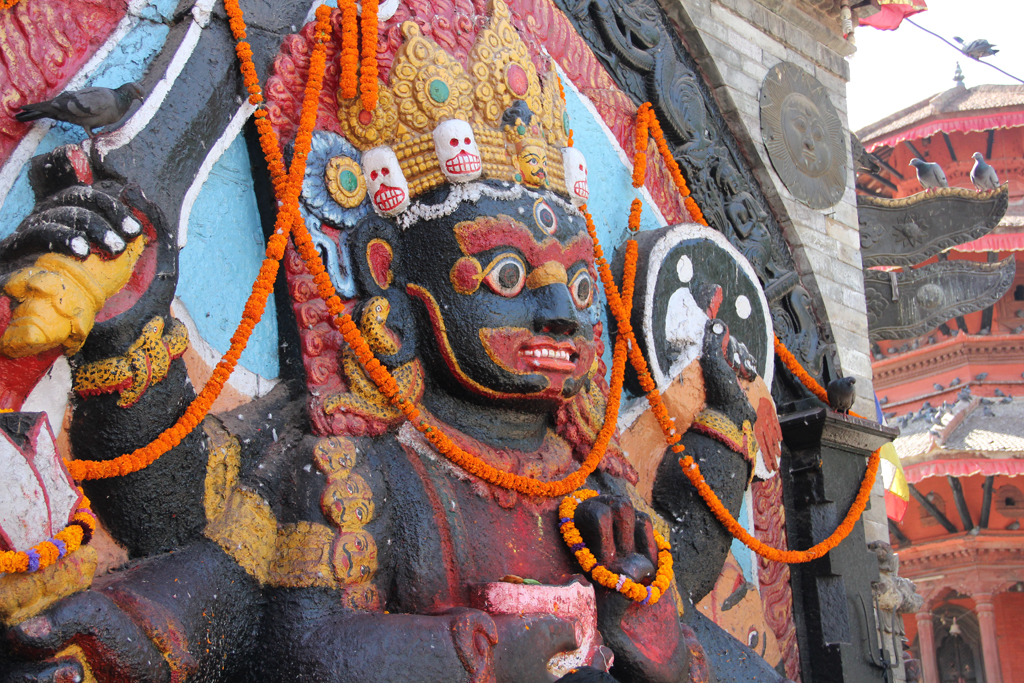 The statue depicting Bhairava, or the fierce version of Hindu Shiva, is a main gathering point within Durbar Square.

There is continuously a group surrounding the monument and giving offerings. 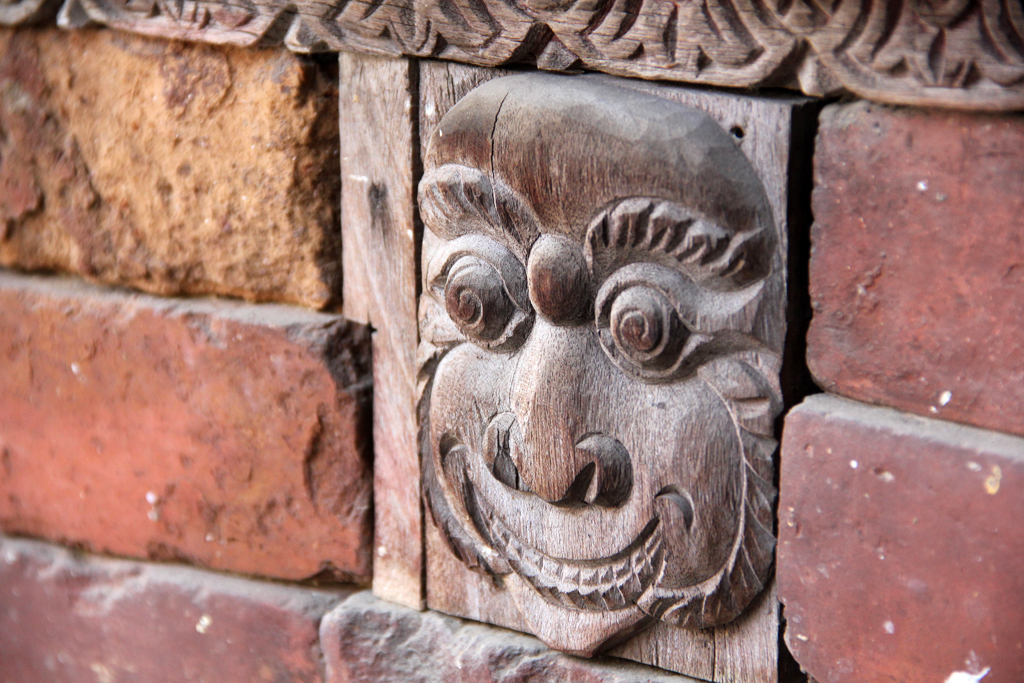 Pay attention to the details while walking around Kathmandu, there are so many interesting gems throughout the city. 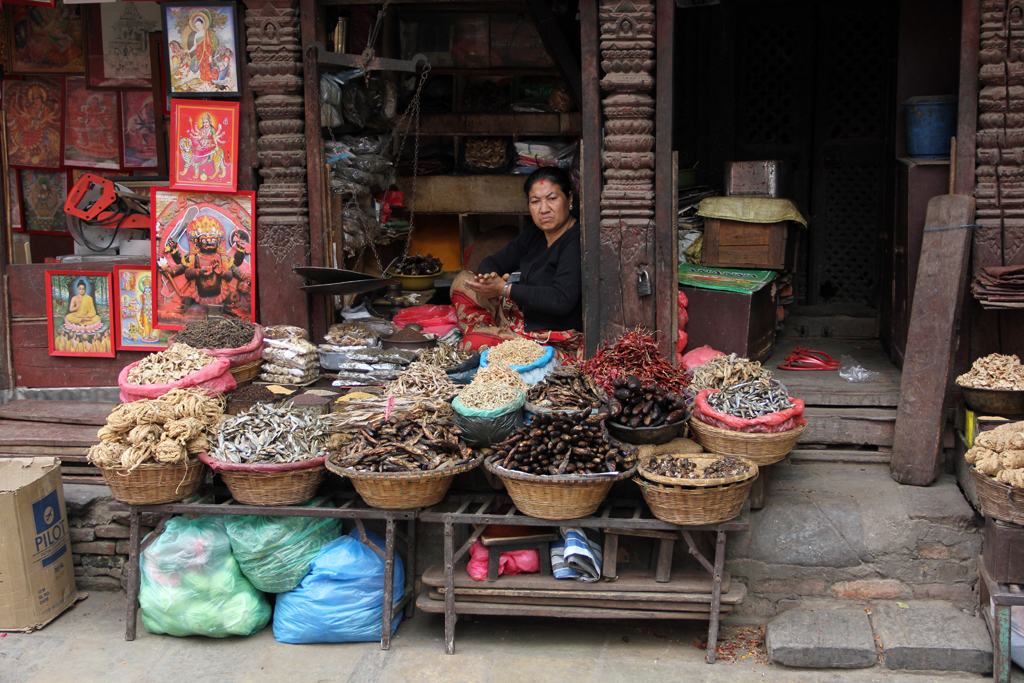 Tucked into small stores that look almost like ancient wooden closets, markets in Kathmandu are colorful and plentiful. 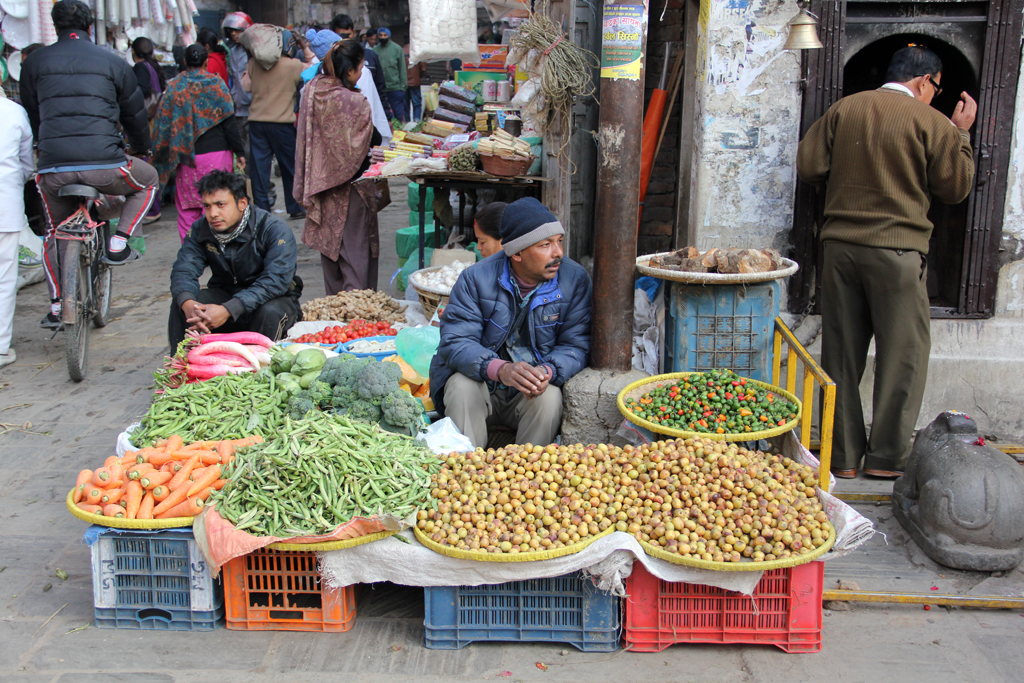 Throughout the day you can purchase fresh vegetables and fruit at nearly every corner of the old city. 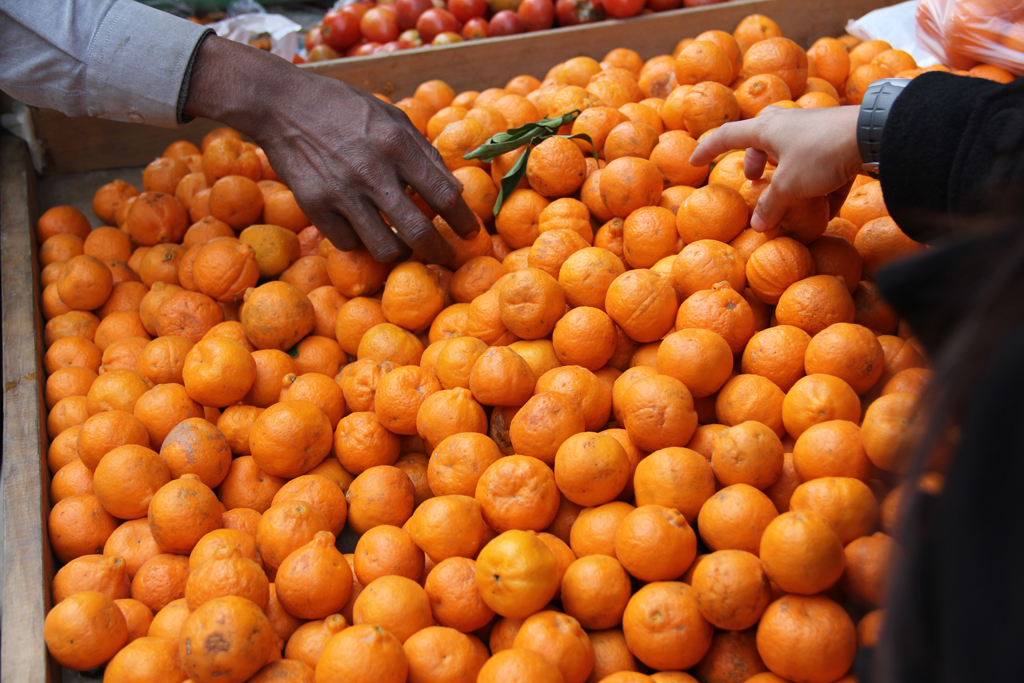 Little mandarin oranges are everywhere in Kathmandu, and they are extremely cheap, juicy and sweet. 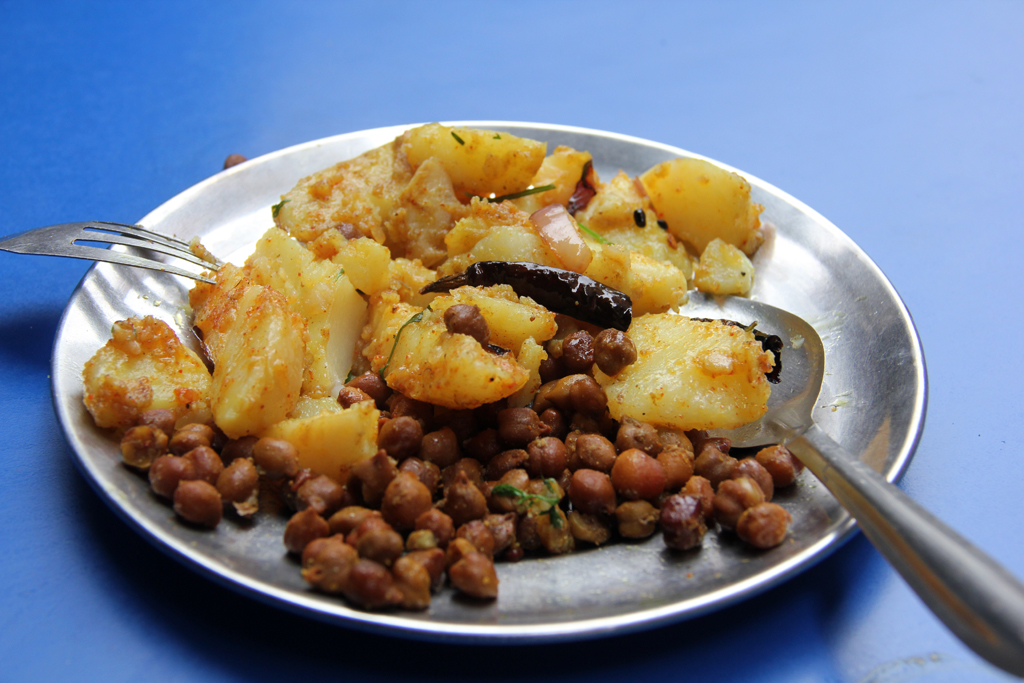 Potatoes and chickpeas for breakfast

For breakfast I'd often stop for a street side plate of fried potatoes and seasoned chickpeas.

Along with a few cups of hot chai to wash things down, it made for a great light meal. 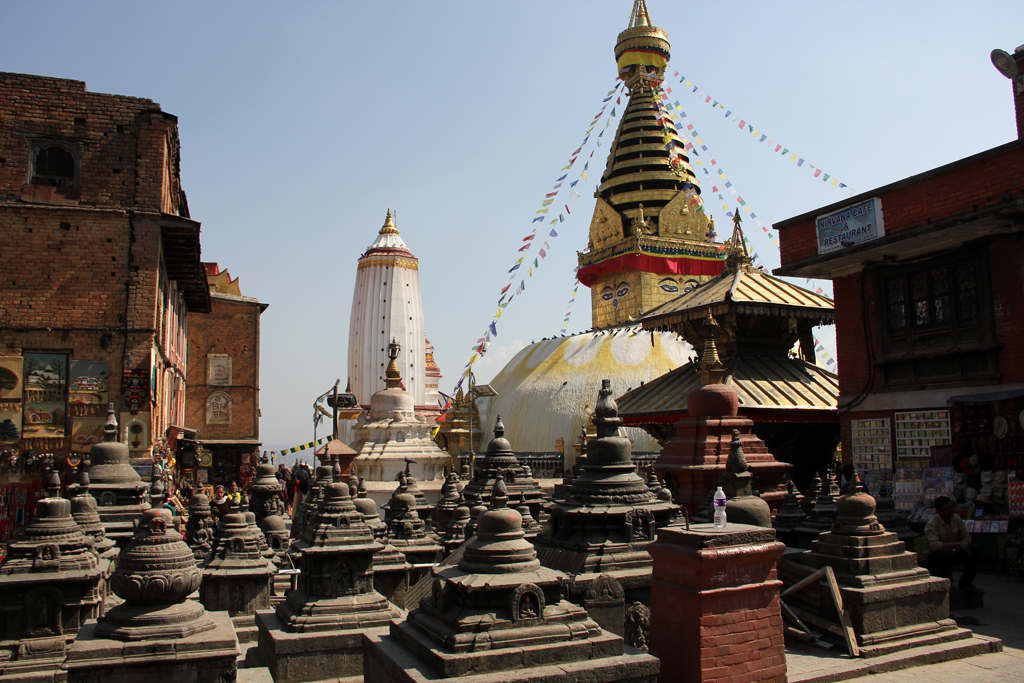 Swayambhunath, also known as the Monkey Temple in Kathmandu, is located on top of a hill in the city and offers a wonderful view.

Along with Boudhanath (pictured below), it is one of the most important stupas and sites for Tibetan Buddhists. 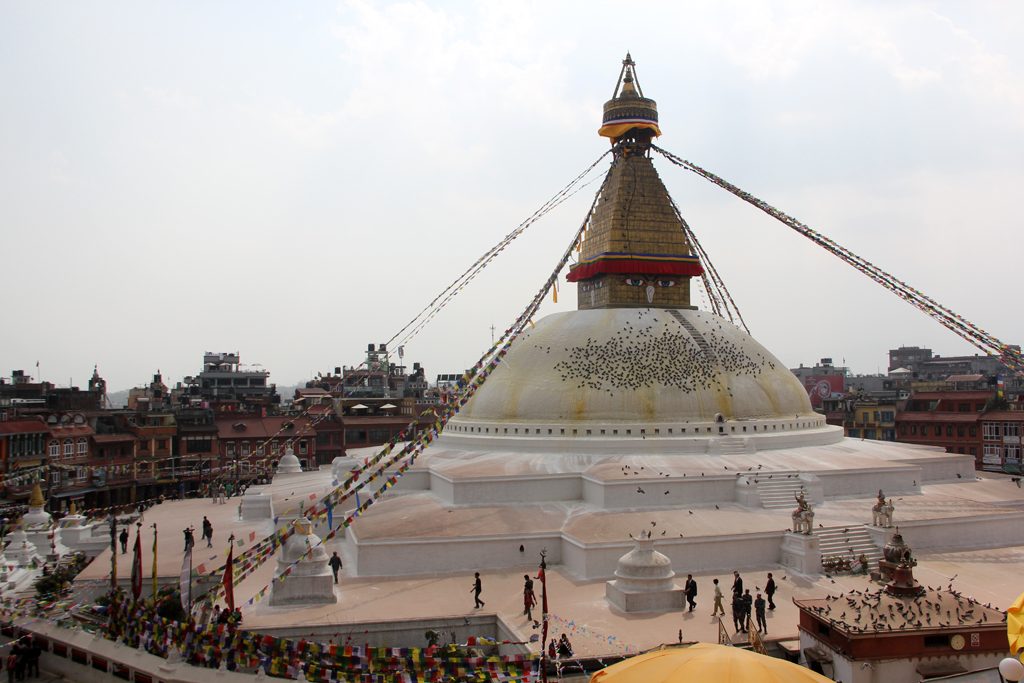 Removed from the ancient part of Kathmandu is the famous Boudhanath, or just Boudha, stupa.

This UNESCO World Heritage Site is one of the largest stupas in the world, and is an extremely holy place for Tibetan Buddhism.

Everyday, thousands of followers come to Boudha and walk laps around the stupa. It's an incredible area to experience when you're in Kathmandu.

Always wanted to explore this aprt of the world - really enjoyed this article and lvoe the big photos!

I agree with you Dave. I much preferred Pokhara.

Love Kathmandu...over due for a return. It was the first place that I visited that was significantly different that home...the noises and crowds overwhelmed me at first. I remember venturing out to the Monkey Temple with trepidation and excitement....it is so real and so alive in Nepal. Thanks for taking me back! There is so much to this place...it still fascinates me.

I had a similar reaction to Kathmandu, overwhelming at first, especially with the daily power outages, and then excited and ultimately fascinated by it all.

But in terms of relaxing in a peaceful setting, I much preferred Pokhara!