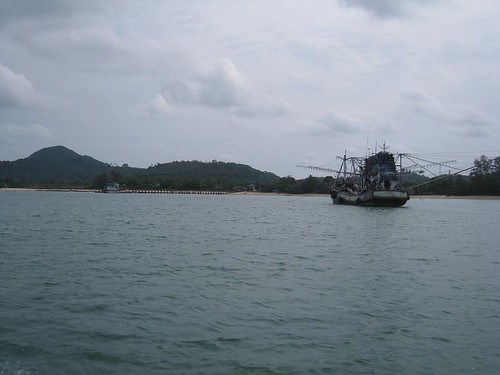 The ferry ride from Rangon to Koh Phayam was very scenic. Clouds hung so low it felt like you could reach up and grab them.

There were two European couples on the boat, and me. Everyone else was Thai, including the guy next to me who worked on the island helping sea gypsies. 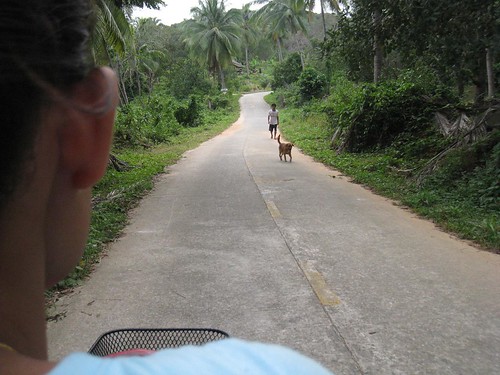 The Lonely Planet dedicates about two pages to Koh Phayam (not much), but it does mention there are no cars – only motorbike taxis and a little “highway” that runs across the island.

I was hoping the taxis would have a little side cart for me to sit in but no such luck.

Thankfully, Dan's dare had given me some experience on the back of a motorbike, however riding around on the smooth asphalt of Bangkok felt far safer than holding on to a petite Thai girl who doesn't speak English as she drives over crumbling concrete, sand, and puddles.

It reminded me why it's not a good idea to take up scooter-riding on the islands.

Before I left Koh Phangan, I saw an older woman with road rash from her right shoulder to her right ankle. It looked horrifically painful. 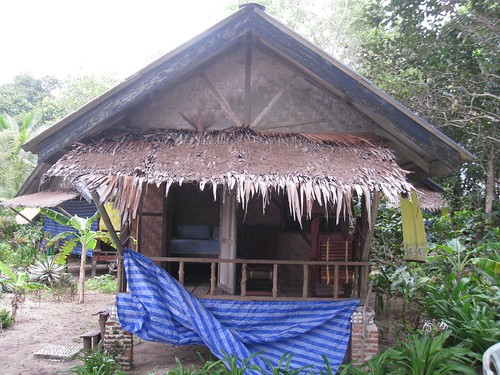 The scooter ride through the quiet, undeveloped interior of Koh Phayam had me feeling a little bit of adrenaline, and a lot of anticipation about the beach I was about to arrive at.

Bamboo Bungalows had a great write-up in the guidebook, so given it was the low season, if backpackers were to be found, it'd be there.

I arrived to find the place almost empty. Most of the restaurant's tables and chairs were piled up in a corner, reflecting little business this time of year.

I had my pick of bungalows, so I took the one with the best beach view. Unfortunately, due to higher winds, they put up a fabric fence to block blowing sand from the beach.

Still, I could hear the thundering waves just perfectly. They were LOUD. 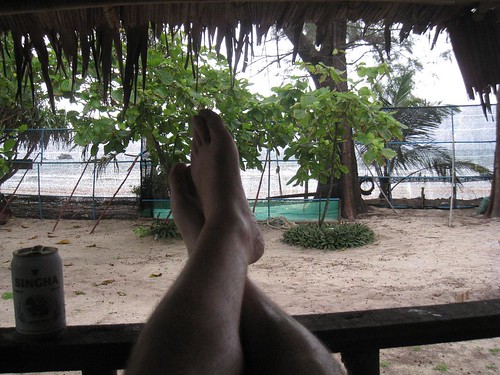 My bungalow was as rustic as they come. The spaces between the floorboards were clearly big enough for large cockroaches to invade the room, yet the reality of such an experience didn't occur to me.

I was too excited. I enjoyed a post-arrival Singha with my feet up.

And then it sunk in that I was alone. Too alone. There was an older Aussie expat staying next to me.

He was helping two Thai sisters who were friends of his (Thai) wife to find bungalows to rent out on the island. 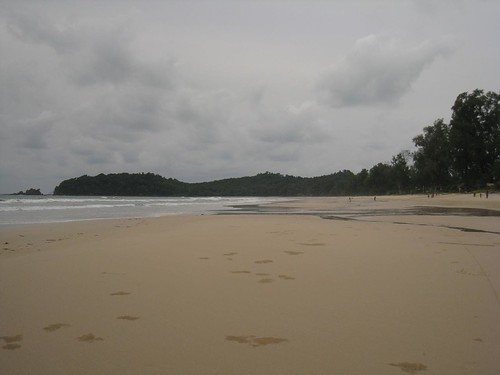 I arrived at low tide so I explored the 3 kilometer beach in both directions. There wasn't much. Most of the bungalow operations were closed for the low season. 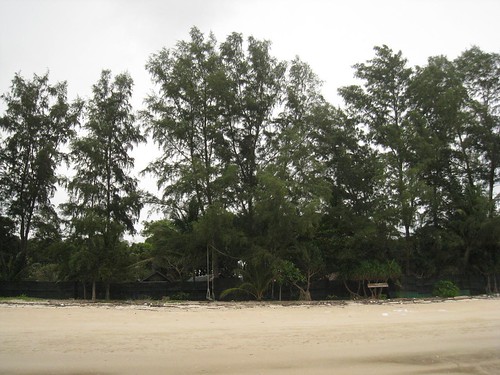 After my walk on the beach, I got some dinner with the Aussie guy and Thai sisters.

The guy had been living in Thailand the past 20+ years or so, and would take breaks from talking Thai to keep me somewhat entertained with his perspectives on the development of Thailand over the last 30 years.

He also clued me into the fact that the business owners on Koh Phayam were cutthroat, and apparently, the undercurrents of life on the island were akin to a soap opera, complete with violence, drugs, intimidation, gossip, etc.

Funny how ignorant tourists can be to such things. There was even a yellow drug boat that encircled the island, from which you could buy anything you wanted.

There were police, but they were being paid off so the tourists that wanted to get high in paradise were free to do so.

Inebriated tourists on scooters and large snakes were reason enough to stay at one's bungalow once the sun went down. Not that there was anywhere else to go!

But sometimes you just need to be alone. I just read an article on the Cool Travel Blog about staving off loneliness while traveling. Sometimes business is the key but reflection is also nice once in a while. Silence can be just what the doctor ordered.

But sometimes you just need to be alone. I just read an article on the Cool Travel Blog about staving off loneliness while traveling. Sometimes business is the key but reflection is also nice once in a while. Silence can be just what the doctor ordered.

drop the lonely planet. you'll have the most memorable experiences that way and the best stories to tell afterwards.

drop the lonely planet. you'll have the most memorable experiences that way and the best stories to tell afterwards.

I'm with Matt... the LP doesn't do REALLY remote places. However, the skimpy description is a good indicator that it might be interesting (aka lonely) - I've always had the best luck with places that are about 1 paragraph in the LP *grin*