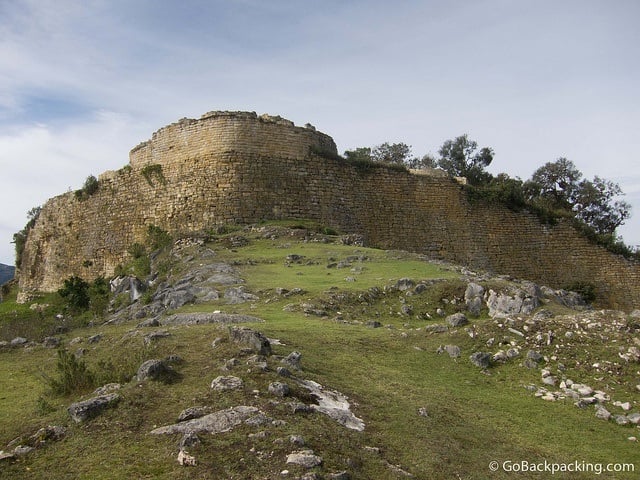 One of the many reasons I chose to take the long, scenic route from Ecuador to Peru was so that I'd be in a good position to visit Kuelap, a Pre-Inca, Pre-Colombian, mountaintop fortress built by the Chachapoyans (know as the Cloud Forest people).

Little is known about Kuelap, though we do know through carbon dating that construction began in the 6th century AD, and the location was occupied until the mid 1500's. 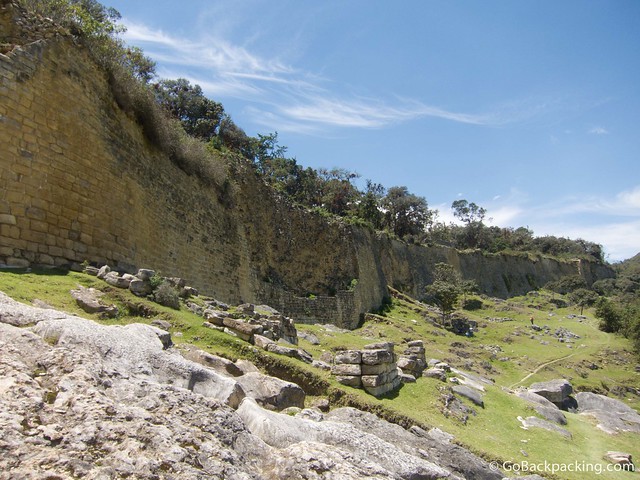 To get there, we left Chachapoyas early in the morning, and drove 3 solid hours along steep, unpaved mountain roads until we arrived at the parking lot for the ruins.

From there, we had a short 10-minute walk to reach the fortress, though in total, we'd spend a whopping 3 hours touring the ruins. 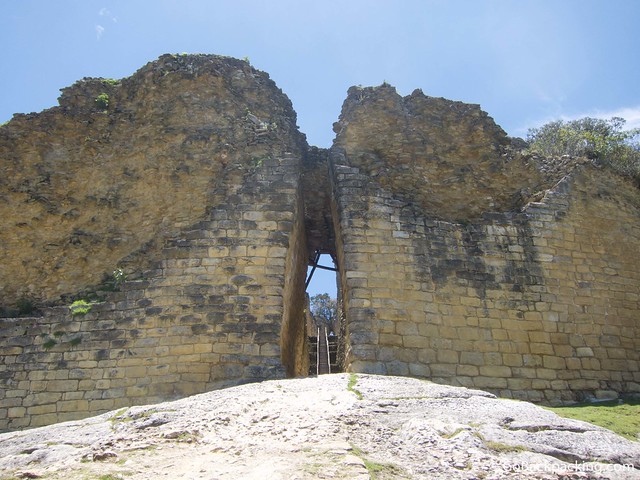 This narrow entrance to Kuelap fortress is either a defensive measure, a symbol of the female genitalia, or both

Kuelap is strategically located atop a mountain 3,000 meters above sea level.

The first thing I noticed up there was the 360-degree, panoramic views.

You'd be hard pressed to build a fortress with a more commanding view of the countryside. 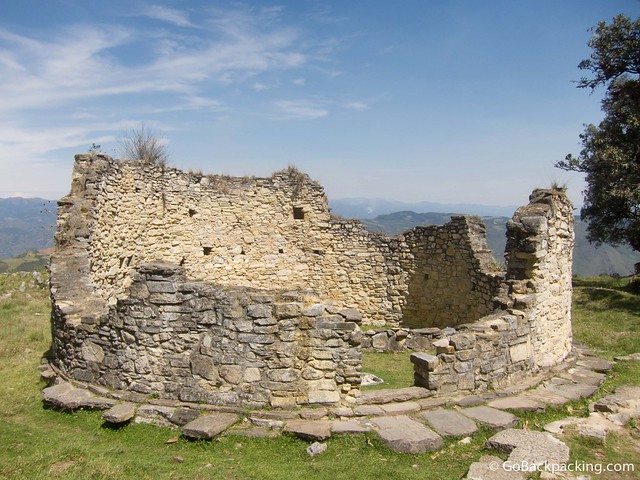 Ruins of one of the 400 structures within the fortress walls 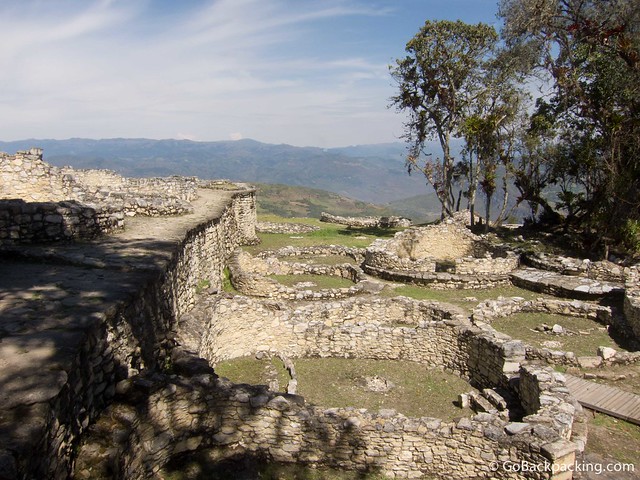 View of the surrounding mountains from atop Kuelap

Within the walls of Kuelap are approximately 400 individual structures — mostly circular in shape.

Within many of the structures, you can still see the smooth, worn stones used to grind food.

Among the more interesting tidbits relayed by our guide was how the Chachapoyans were excellent brain surgeons, and that skeletal evidence existed of the surgeries they'd perform.

At one point, he even moved aside a stone, in what appeared to be a mass tomb, to reveal human bones. 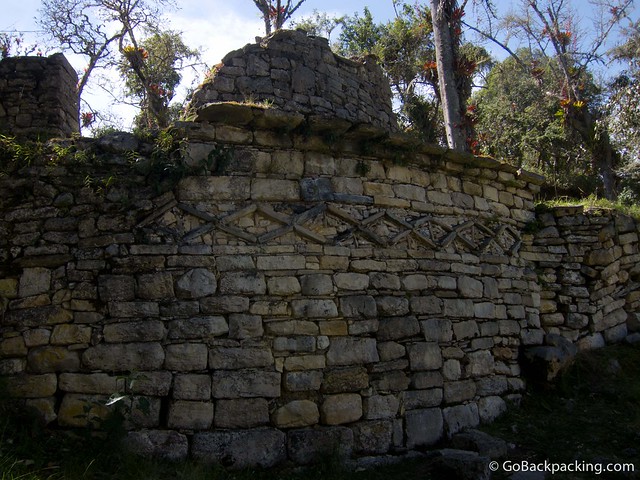 Buildings with intricate stonework are thought to be the homes of shaman, or holy men 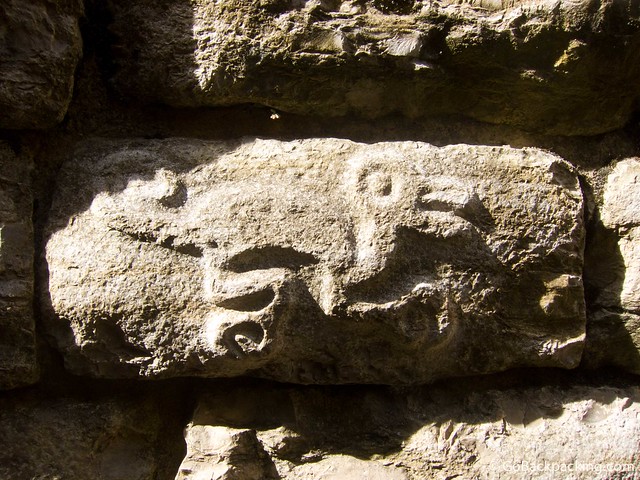 This stone carving is a combination of 3 different animals, each with their own symbolic meaning

Someone on our tour mentioned just 24,000 people visit Kuelap each year.

Compare that to the 2,500 people that visit Machu Picchu each day, and you'll get a feel for how off the beaten track you'll be by visiting Kuelap in northern Peru.

As I write this entry, having been to Machu Picchu, I'm even more thankful that I had the chance to visit Kuelap first.

Aside from a few other tour groups from Chachapoyas, we had the entire 1,500 year old fortress ruins to ourselves. 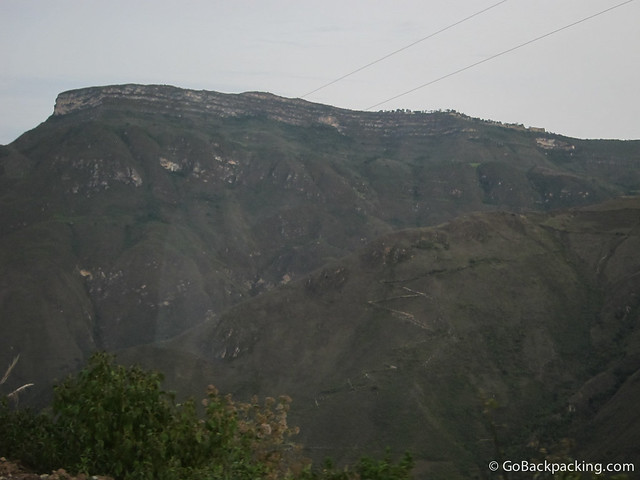 The Kuelap ruins can be seen along the right side of the mountain ridge, where there are trees

Where to Book:  Most hostels and travel shops in Chachapoyas. I used Andes Tours. If you're not fluent in Spanish, make sure you're getting an English-speaking guide.

What to Bring:  A daypack, your own supply of snacks and water (we didn't eat lunch until 4 pm), sunglasses, sunscreen, several layers including a light jacket in case it rains.

I'm a travel blogger from Brazil and I'm planning to go to Peru this year. It'll be my second time in the country, but this time I want to go to the nort / northest part of Peru. But it's hard to find good information about it.

Is that true that to get to Karajia tomb, it's necessary to get a 3 hours trail?

Thank you for your time :) Natalie

I remember the name, but don't recall the details as I didn't go. I would not be surprised if it was a 3-hour minibus ride each way. The long distances are part of why I didn't do more sightseeing.

When I went to Kuelap we say a Peruvian guy pissing on the ruins. Of all the places he could have pissed he chose on of Perú's historical treasures.

Currently in Arequipa and I'm hoping we could make it Kuelap! Trip might be intense for the toddler though.

Yeah, 3 hours in a bus on dirt roads is a lot to ask of any toddler. It was a long day even for us adults, but worth it if you can manage. Just bring enough water and snacks so you're not relying on lunch the whole time.

Thanks, I'll have to hit that up when I eventually make it to South America. Ruta de la Muerte in Bolivia is currently the top destination on my list, but you've just added Kuelap to it as well. Did the guide give any indication of what the circular structure you labeled "Ruins of one of the 400 structures within the fortress walls" would have been?