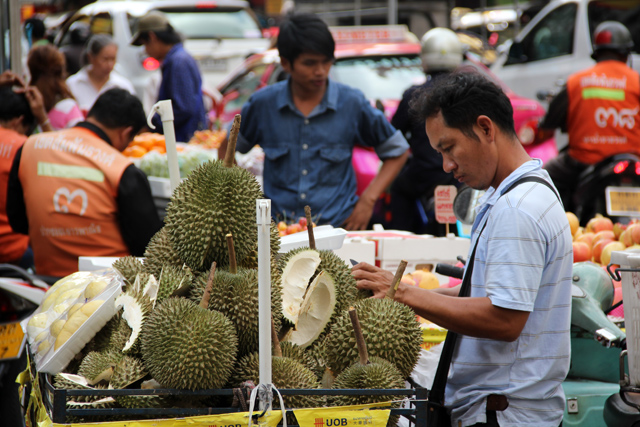 Bangkok's Chinatown, known as Yaowarat, is one of the most exciting places in town!

The area is alive and bustling at all hours of the day with busy markets, thriving businesses, and lots of restaurants. Stopping by and spending a little time in Yaowarat is a must when visiting Bangkok.

A Little History of Yaowarat

It was hundreds of years ago when a wave of Chinese migrated to Bangkok looking for new lives and jobs.

Because they weren't permitted to settle inside the walls of the Grand Palace, the Chinese moved just outside the central district on the road known as “Yaowarat.”

The Chinese came to Bangkok as poor farmers, searching for a new way to make a living.

With a strict attitude to succeed, paired with the Chinese business savvy mindset, many of the Chinese in Bangkok worked their way into starting large scale businesses. Eventually, Yaowarat became the center of trade in Bangkok.

Today, Bangkok's Chinatown is one of the wealthiest areas of town.

You'll know exactly when you're in Yaowarat by the giant signs filled with Chinese characters, the flashy neon billboards, the scores of pedestrians, and the smells and sounds. 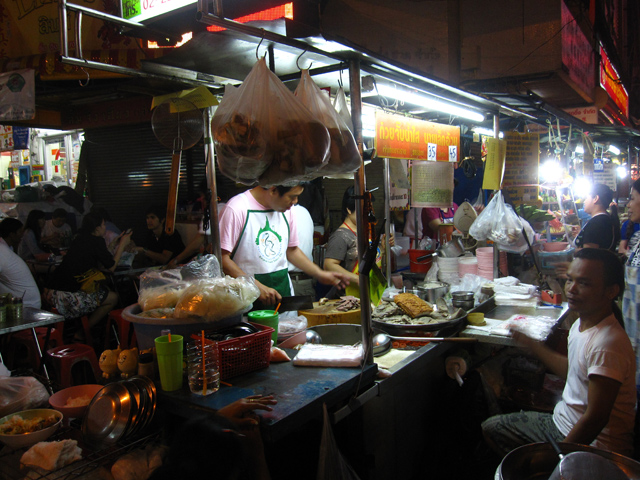 Though Yaowarat does have its share of high-end Chinese Thai restaurants, the area is also known for its abundance and quality of Bangkok street food.

Every day at around 5 pm street vendors begin setting up their tables on the side of the road and preparing for another busy night of hungry customers.

From specialty Kuay Jab (rolled rice noodles) to the freshest seafood, Yaowarat is guaranteed to be stomach pleasing! 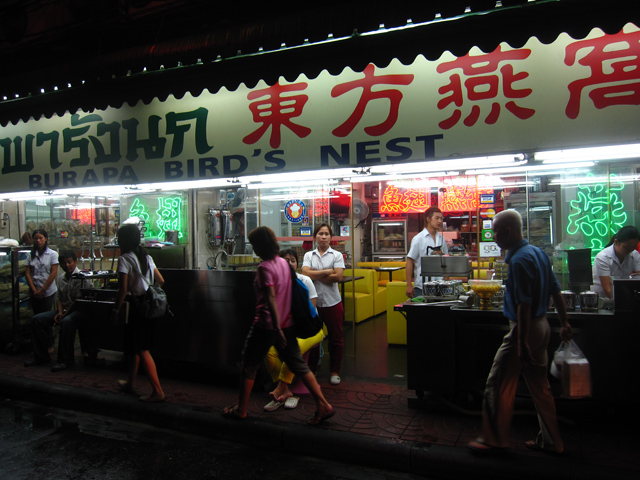 After eating delicious street food, in my opinion, there's not a lot that's more fun than sampling exotic dishes.

Though it can be slightly pricey, Yaowarat is the place to go for bird's nest soup, durian (available year round), and roasted suckling pig! 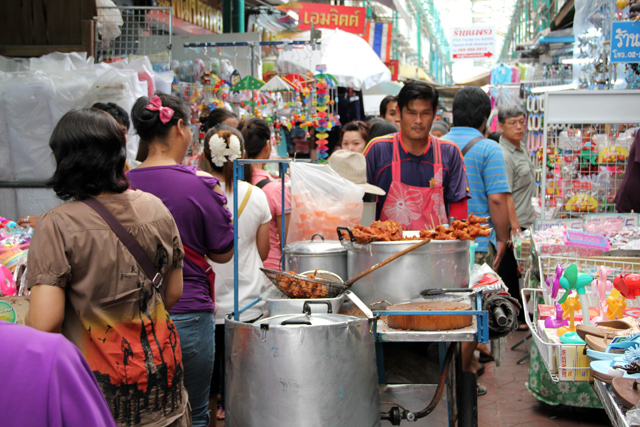 Though all of Bangkok is well known for its crazy amount of street shopping, the area around Yaowarat takes things to the next level.

The Sampeng Market in particular (a small lane that parallels Yaowarat Road) is a humongous open-air street market that stretches through the alley for a few kilometers.

The market is stuffed with every form of trinket imaginable – be careful of hot flaming snacks coming through the aisle! 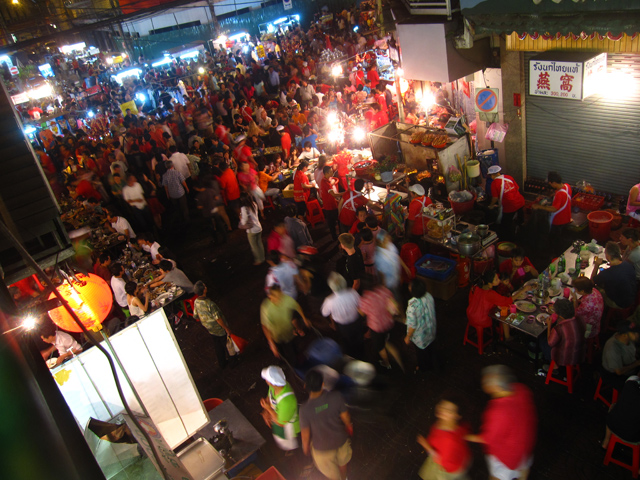 Anytime there's a Chinese oriented holiday, Yaowarat is the ultimate place to be in Bangkok

On Chinese New Years the streets around Chinatown are blocked from motorized traffic, and the road becomes a walking street filled with hundreds of vendors and thousands of pedestrians.

Though at times it can be overly hectic, there's nothing like being part of a massive crowd out to have a good time and to snack on all kinds of delicious things!

Another popular event in Yaowarat is Thailand's annual vegetarian festival.

Since the Chinese started the tradition, the center of the festival takes place in the heart of Yaowarat.

Every year hundreds of stalls set up serving top of the line vegetarian Thai food.

With so much to do and see (and eat), Yaowarat is one of the most exciting parts of Bangkok!

Of all the places I've been in Thailand, I least liked Bangkok the most. But what I liked most about it was Chinatown. Its ri-dic-u-lous. I actually found it by accident wandering around the train station after realizing our train was hours away - which is perfect to do if you got time to kill before your train as its a walk away. But yes, its hectic, dense and alive.