It's the same old story- You arrive at a hostel. You look around at the other travelers, hoping for some piece of familiarity that you can use as a catalyst for conversation. A sports jersey or an accent or fondness for a brand of beer. ” You like Chiang beer too? What a coincidence!” And so it begins. You don't know it yet, but you will eventually spend hours with these people, wandering the streets of your destination, acting as if you have known each other for years. 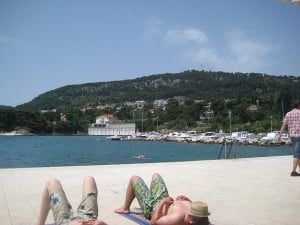 At the beach with the Brits (Split)

In this true backpacker formula, my British roommates and I were best friends within two hours of meeting. We bonded and laughed for hours in the air-conditioned dorm rooms over the linguistic differences between the Brits and Americans, such as ” khaki pants” and ” aluminum.”

In those two days, my new friends and I went to a traditional Croatian dinner, splurged on cherries from the fruit stand downstairs (or rather, I splurged for all three of us), watched Jackass 2 and other terrible examples of American entertainment, rated girls as ” deal” or ” no deal” as we walked by, and went beer for beer on a pub crawl. They reminded me of the boys I had grown up with in the States: cocky, flirtatious, witty and often vulgar. It was a perfect travel friendship because I didn't have to wander around alone and they got to harmlessly flirt with an American girl they would never see again. They even added me on Facebook, so that had to count for something, right?

But to my surprise, by the time I got home they had already deleted me. Why would they do this?, I wondered. Didn't we share some laughs over our two days in Split? And then a better question: Why did I care? The truth is that although we seemed like friends in Croatia, it never would have made us friends in real life. They wrote me off that morning I checked out of the hostel (one of them more so because I turned him down, but still). I would never see them again, but I felt like this made our fun two days meaningless. And as naÃ¯ve as it sounds, I wasn't used to the people I meet on the road not liking me. At least not openly. It felt like getting rejected in high school. 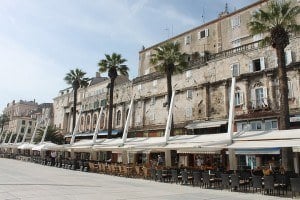 I should have been grateful to them. It made me more realistic about the people you meet while traveling. Sometimes you meet amazing friends who you click with, keep in touch with and live to travel another day with. I have some great ones of these like Tamar, who I met in Washington DC in 2005 and who has visited me in Atlanta almost every year since. Other people were the product of timing, convenience, and most likely alcohol, that you will probably never see again. Obviously these British boys fit into this category. I could overanalyze it as much as I wanted to, but you know which people are meant to stay in your life. Both kinds of people have a place in your adventures. And at the very least, they certainly make the stories more interesting.

About the Author: Caroline Eubanks is a freelance writer based in Atlanta, Georgia who has covered everything from fashion shows to sugar daddy bars and aerial yoga to drag shows in her career. Since writing gigs don't pay all the bills, she has worked as a gift wrapper, label sewer, taco seller, and errand runner. Her preferred outlet for writing is her blog, Caroline in the City, where she documents her adventures around the world as a city girl with the occasional taste for the country. Follow her on Twitter and Facebook.

Maybe they were due to go back home to their girlfriends. I wouldn't think it was anything you had done, apart from like you say, turn the one bloke down. His problem then. Facebook on the whole is good.

One de-friended you because you turned him down. The other de-friended you in solidarity with his buddy, who would have been irked if he had kept up a friendship with you. Consider it a traveling-one-night-stand!

I have heard a similar story and it was the girlfriend of one of the guys who made him defriend the young lady he had just met in his trip. for whatever reason it was childish.

I think that is a bit one sided and just one of your experiences. I have been backpacking many times and the last time was when facebook had just taken off big time. Everyone I met is still facebook friends with me and we still chat online. One extreme example is I even met one aussie backpacker friend who now lives in Indonesia (Im in the UK).

Although to be fair them other 2 fellow Brits are weird for de-friending someone.

Great post Caroline!!! OMG, I can't believe they de-friended you? Why on earth??? What idiots!