On my first visit to Cartagena in early 2009, I invited my new Peruvian friends to join me for lunch at La Cevicheria, the restaurant featured in Anthony Bourdain's “Colombia” episode of No Reservations.

Despite an address, I found on the Travel Channel website, and the company of two fluent Spanish speakers, we were unable to locate the restaurant on our own or by asking around. 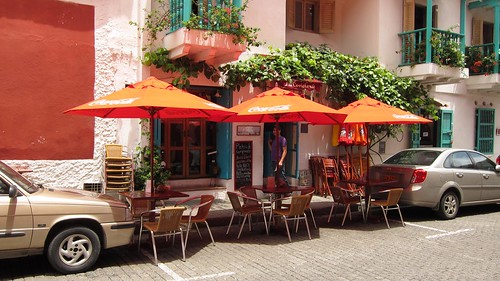 Fast forward to mid-2010, and I have all the time in the world to right this tragic foodie wrong.

Seeing as how I'd already eaten at Brasarepa, the Envigado restaurant featured in the same episode, it was now a matter of pride that I track down La Cevicheria too.

This time, I got the address from the comfort of my hostel room thanks to my laptop and solid wi-fi signal.

Then, I identified the location via Google Maps on my BlackBerry Curve.

The restaurant is located in the upscale San Diego neighborhood at the north end of old Cartagena.

It was surprisingly easy to walk there from the iconic clock tower.

La Cevicheria is situated on a quiet little cobblestone side street.

Three tables, taking up the combined width of a single parking space, are set up for al fresco dining each afternoon.

I took a seat at the middle table and began to decipher the menu, which was all in Spanish.

A photo of Anthony Bourdain, along with the owner, was featured on the back. 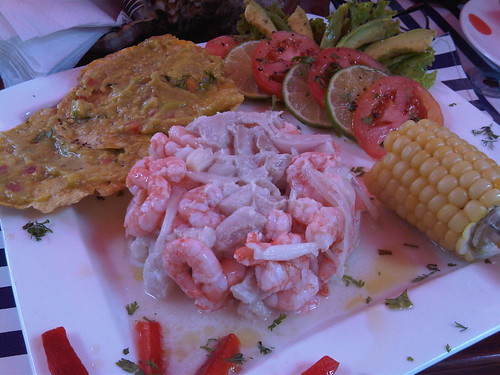 Peruvian ceviche of fish and shrimp served with plantains and salad.

A Thai-American woman named Tania, and her Colombian boyfriend Daniel, who had seated themselves inside before I had arrived, came out to keep me company.

They were both doctors working in the USA and spoke perfect English, so I was able to enjoy their conversation in addition to the fresh seafood.

I went with the Peruvian ceviche of fish and shrimp, served alongside crispy plantains smothered in guacamole, a fresh salad of lime and tomato, and a small piece of corn on the cob.

The presentation showed attention to detail, and I dug right in.

I've had a bite of ceviche here and there before, however, this was the first time I ordered it as a main course.

The shrimp and whitefish were coated in a lime-based juice.

As with sushi, I find eating raw seafood to be a unique experience that is often more about the pretty presentations and textures of the food, then the actual flavors.

The portion size could easily have fed 2-3 people.

The price was about $20 based on the current exchange rate; including a glass of fresh orange juice, tip, and tax, the total bill was $27. 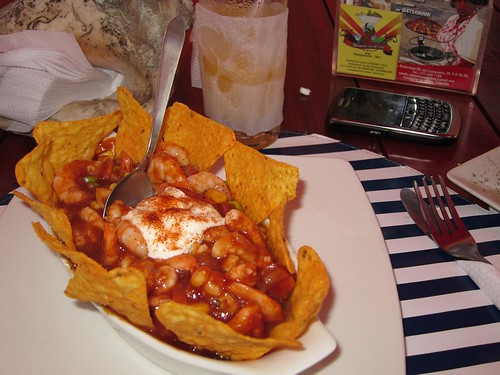 Satiated by my first true ceviche experience, I went to upload photos back at the hostel, only to find my new 4-gigabyte SD card wasn't working.

As I wasn't about to write of this meal without photos (the photo of the Peruvian dish was taken with my BlackBerry), I deemed it necessary to return a few days later.

I took the same middle table outside, however, this time dark clouds were rolling over old Cartagena, and I knew my time outdoors was going to be limited.

I ordered the Mexican ceviche with shrimp, avocado, corn, and sour cream, served in a thick and tangy barbecue sauce, accompanied by tortilla chips.

The dish might not look like much from the photo, however, there must've been 100 shrimp in there.

As a light rain began to fall, I held steady at my outdoor table, loading the tortillas with the sauce-coated shrimp.

Again, the serving size could easily satisfy 2-3 people, and despite my best efforts, I left a lot of good shrimp behind that rainy afternoon.

I love avocado, and it's a big part of why I chose the Mexican-style ceviche, so I was surprised that the dish was so rich in shrimp, and severely lacking in avocado.

The small pieces were about the size of the corn kernels, meaning they were greatly overshadowed by the sauce and shrimp. 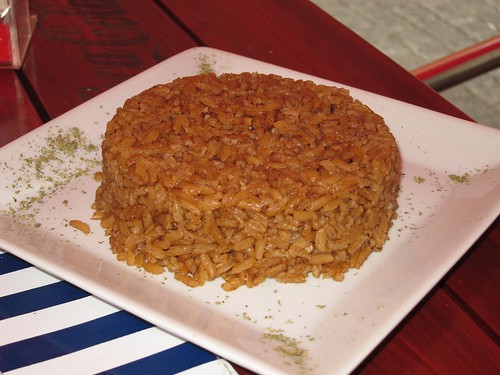 It too was delicious, and I only wish I'd eaten more of it while I was in Cartagena. 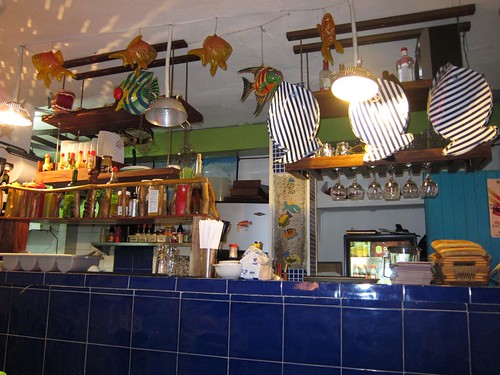 The small kitchen at La Cevicheria.

Eventually, the rain turned from a light sprinkle to a torrential downpour, and I escaped to La Cevicheria's interior dining area, which included an open kitchen, and three small tables.

A framed photo of Anthony Bourdain and the owner hung on the wall, along with a variety of seafood-oriented decorations.

I asked for more chips, as the shrimp ceviche was too rich to eat without them.

They weren't quite what I expected, tasting more akin to a light version of Doritos than a Mexican style corn tortilla chip.

And I waited, and waited, for the rain to let up. By then, fully satisfied, I dreamt of sleeping off my second divine ceviche experience.

PS – I like to make jokes about how Colombia's food is the one downside to living here, however after enjoying several meals at La Cevicheria, I realized the cuisine is much more varied than the typical set lunches of soup, chicken/meat, and salads.

Baaad experience! Still in the midst of food poisoning from there. Prices too high. Kitchen service is too slow. Maybe at the time we got ours it fermented too much? Seriously, we had 2 different courses and we both suffer for the third day. Ceviche is ceviche... no more.

Sorry to hear you had a bad experience. I went back again for my birthday in September 2013, and had the exact same Mexican style shrimp ceviche dish as 2010, and it was fine (actually better as they improved the quality of tortilla chips used).

Hello, I like your submit. I desire everyone would pay such attention to their put up as you do. I came acros your webpage on yahoo when searching for a compartment. I will arrive back again to your blog. I'm sorry for my poor englisch, i am from your netherlands. Best regards from the netherlands!

What an awesome review! That place looks super yummy!!! I heart AB. :)

Great review Dave, makes me want to pay a visit. Ceviche is one of my favourites... I was totally addicted to it In South America, especially in Ecuador.