As far as London is concerned, you don't get a feel for just how vast or old this city is until you look at it from a near bird's eye view.

Imagine standing on an observation deck, staring out at one of the greatest capital cities in the world, packed full of centuries of history and people from all walks of life.

Luckily, there are plenty of opportunities to do just that. Forget the London Eye, which is both dull and overpriced. Here are some of London's best views, on a range of budgets. 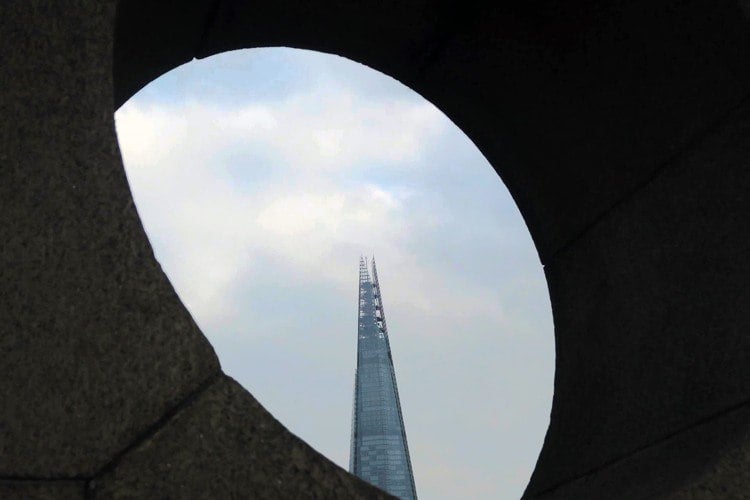 I see the irony in dissing the London Eye, only to move on to the equally as expensive Shard – but hear me out.

The Shard is a 95-storey skyscraper, which has the honor of being the tallest building in both London and the European Union.

The tower has a privately run observation deck, known as the View from the Shard.

The reason I like the Shard is because the view is genuinely impressive and the lines tend to be shorter than those at the London Eye. That and you can stay and leave at your leisure.

If the View from the Shard is a must-do for you, then try to time your visit for either sunrise or sunset.

Sunsets over London are one of the most beautiful things I've had the pleasure of witnessing during my years on this earth. 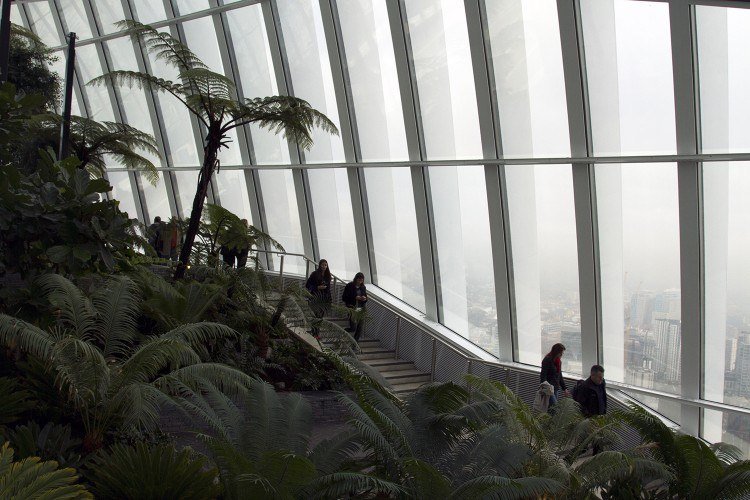 The Sky Garden at 20 Fenchurch St.

Did you blanch at the price of the View of the Shard? Can't say I blame you if you did.

Luckily, there's a cheaper alternative that you can choose to visit – just across the River Thames.

The Sky Garden is exactly what the name suggests – a garden in the sky, on the 35th storey of 20 Fenchurch St., which is known colloquially as the “Walkie Talkie.”

Bookings in advance are essential, which can be done via their website.

Admittedly, I'd feel a bit jipped if I had to pay to get into the Sky Garden. But, for zero dollars/pounds, it offers in my opinion, superior views to the Shard for one particular reason.

I, among many others, regard the Walkie Talkie as being a blip on London's skyline. There is something about that building that just isn't aesthetically pleasing.

The Sky Garden website promotes itself as offering “uninterrupted views of the city.” I can only imagine that this is the case, as the Walkie Talkie isn’t in it.

This isn't the first time I've made that particular joke, and it won't be the last. 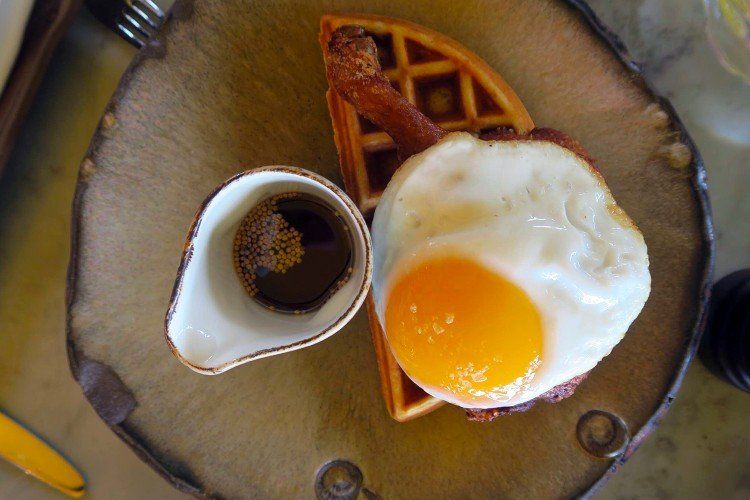 Breakfast at the Duck and Waffle

Dine at Duck and Waffle

Duck and Waffle is a restaurant located within Heron Tower – yet another of London's skyscrapers that unfortunately doesn't have a nickname.

There are two cool things to note about this particular establishment. Not only is it the highest restaurant in the UK, but it's open 24/7.

You can feast on their signature dish and many others at any time of the day or night – from early afternoon to 4 in the morning.

As you can imagine, Duck and Waffle is a popular place to eat out at, so it would be in your best interest to make a reservation in advance. 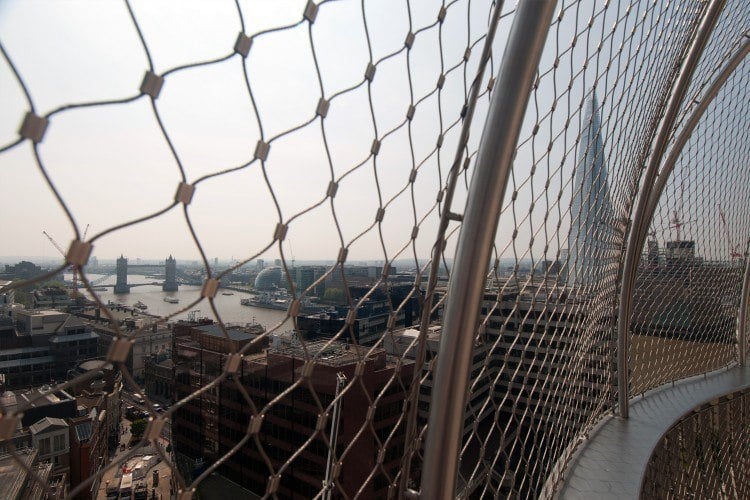 Although London's skyscrapers are impressive, they are a testament to the city's most recent history.

Let's take a step back in time and imagine how London would have looked to visitors and residents alike, in times now past.

The Monument was erected in 1677 to commemorate the Great Fire of London, not too far away from where it began.

Those who know anything about London's history will be aware of the fire that wiped out some 436 acres of the city, including St. Paul's Cathedral.

So, although the city itself sometimes seems as old as the ages, in reality, much of what we're looking at is less than four centuries old.

Although the Monument is now dwarfed by the skyscrapers that surround it, it's still worth a visit – if not for the view, then for the history of the building itself. 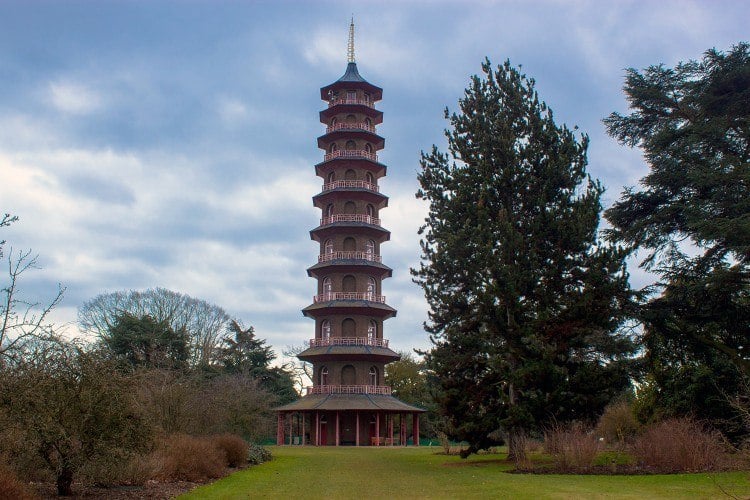 The Pagoda at Kew Gardens was constructed in 1762. At the time, Londoners were fascinated with all things Eastern and the building remains as a testament to the Chinoiserie craze that was then sweeping the city.

The original building boasted 80 dragons that were carved from wood and gilded with gold.

According to the Kew Gardens website, the dragons disappeared in the 1780s.

They were rumoured to have been sold to pay off the Prince Regent's debt, but it's thought that they rotted away over time.

The Pagoda is currently undergoing renovations, over a two-year period. In 2018 it will reopen to the public, giving visitors the chance to experience a bird-eye view from the perspective of Georgian London.

In the interim, the Pagoda can be seen from the Kew Gardens, which are worth a visit in themselves. 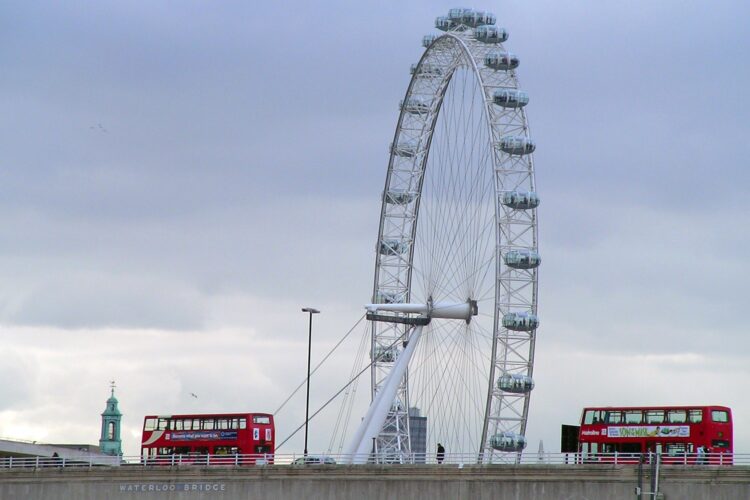 Here's a chance to witness the best of London, while keeping your feet firmly on the ground.

While Waterloo Bridge is probably one of the duller structures spanning the Thames – it offers the best views, no matter which side of the bridge you're gazing out from.

So, take your camera and brave the crowds, to see firsthand the many famous icons that make up London's international identity. 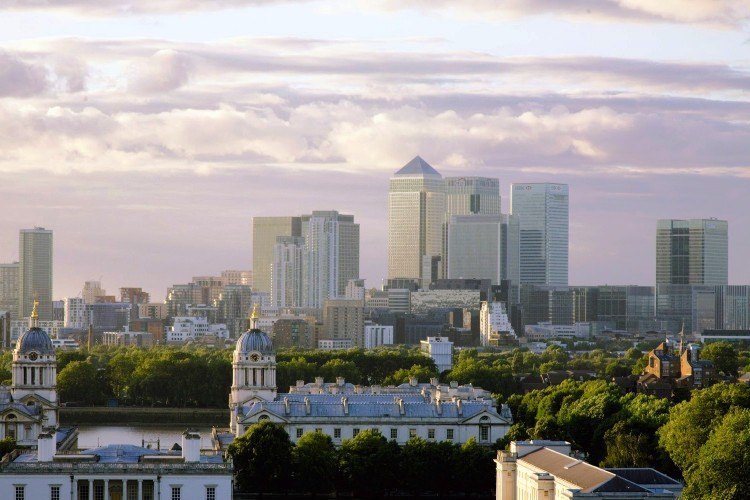 For a different perspective, head straight to Greenwich Park.

If you walk up to the top of the hill where the Royal Observatory is located, you'll be rewarded in two ways.

You'll be able to observe the line that represents Greenwich Mean Time in the flesh.

You'll then be able to gaze out across the park and Greenwich University, to the glittering building of Canary Wharf in the distance.

From there you can visit the planetarium, wander the streets of this historic village, or go full British and have a picnic in the park.

To my eternal disappointment, it has rained every single time I've been to Greenwich Park, but I'm sure it would be quite the sight to behold on a sunny day.

There are plenty of ways to see London, for all different budgets, without having to spend the best years of your life waiting in line at the London Eye.

I took my grandson and niece to London for the first time in December, we travelled to the City by train, I presented the train ticket at the London Eye, no queues, and I got 2 for the price of one, my grandson is a child so got a further reduction. For travellers that use the train into London if you show your ticket I believe it will apply. Check on the internet first! They loved it (and so did I albeit my 4th time) we also enjoyed the free 4D movie after the ride. A great start to 4 days in London. It was also centrally situated compared to the Shard and the Emirate sky ride. We enjoyed the slowness of the Eye especially as we are all photograph mad and there were only 4 others in with us so could move around freely.

I actually really enjoyed the view from the Eye. A few other free places.. There is a bar pretty high up in The Shard, you can take the lift here for free. Also, One New Change, take the lift to the top and you have a great view of St Pauls, The Emirates Cable Car, £3 across the river with great views of CanaryWharf/O2.

Thanks for your suggestions Daniel. The Emirates Cable Car is an excellent addition to the list. The bar in the Shard is a good one too, although I think the cocktails there start at £17, ha! How the other half live. There's nothing really wrong with the Eye, I just don't like how slow it moves... and the crowds make me upset. :)