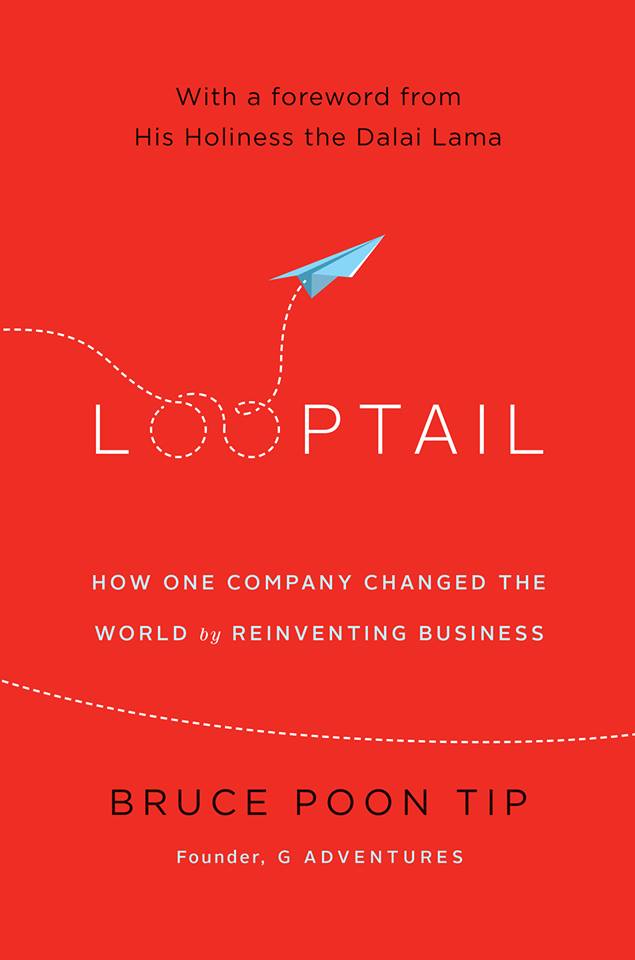 [I]t's a moment I'll never forget. In Fall 2009, while routinely checking my Twitter account for new followers, I was surprised to find Bruce Poon Tip, founder of G Adventures.

I immediately followed him back, while wondering why on Earth the founder of a global travel company was following me.

His tweets served as my introduction to the unique culture and values of a company he'd spent 20 years building from scratch, a topsy-turvy story documented in his first book, Looptail: How One Company Changed the World by Reinventing Business.

At its heart, Looptail is a book about the challenges and rewards of building a global travel business with sustainable tourism practices, exceptional customer service, and an engaging and supportive company culture.

What makes the G Adventures story so unique is that Bruce was always ahead of the curve with regard to the direction he was steering his business, as evidenced by the fact that he was building a presence on Twitter years before other travel companies caught on to the platform's potential.

And, rather than putting restrictions on the use of social media by employees (to punish the few abusers), he instead empowered them all to become active on Twitter too.

Another example from around the same time was the launch of the Wanderers in Residence program, which sought top travel bloggers as brand ambassadors.

By 2010, G Adventures was big enough to contract with A-list celebrities (think Cameron Diaz), but they chose to work with bloggers instead.

One thing all the Wanderers have in common is that they are incredible storytellers, a skill Bruce emphasizes early on as being important for entrepreneurs.

But don't let the themes of business and customer service scare you off. There's plenty of Bruce's personal travel stories weaved throughout Looptail, which I believe broadens its appeal.

For example, after a very warm foreword by His Holiness the 14th Dalai Lama, we're introduced to Bruce as he prepares to enter Tibet, his 100th country before the age of 30.

In an effort to provide encouragement to Tibetan monks about the status of their spiritual leader in exile, he smuggles images of His Holiness into Tibet.

Was that wise? I don't know, but it had an immediate and positive impact on the monks to whom he gifted the images.

I've dreamed of visiting Tibet for more than 10 years, and narrowly missed my first attempt in 2008, so there was no better way to capture my attention and imagination.

Bruce also takes us along as he describes the first tours he began to set up in Belize and Ecuador. Venezuela was an early third choice, but didn't prove as popular.

Oh, and there was the time he was imprisoned in Burma.

And the South Pole. Yeah, he's been there too, sharing photos on Twitter to prove it.

I enjoyed reading Looptail for all its themes, from leadership and management to travel and entrepreneurism.

Whether you're trying to build your own business, manage someone else's, or are simply interested in a behind-the-scenes look at how an innovative global brand is built, there's plenty to learn from Bruce's story.

Looptail: How One Company Changed the World by Reinventing Business is currently available on Amazon.