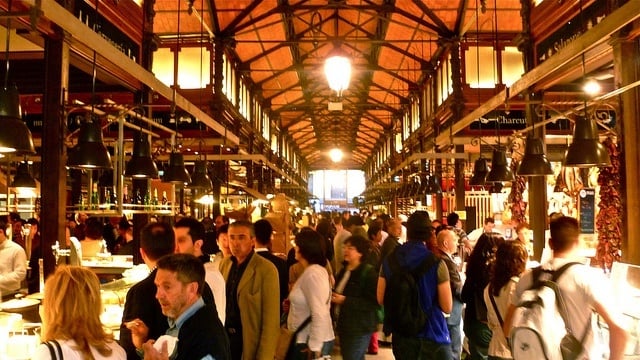 [M]adrid is one of Europe’s liveliest cities, well known for its nightlife, art and historic landmarks.

If there’s one thing that exploring the winding streets and cultural squares gives you, it’s an appetite.

And luckily, Madrid has plenty to offer those with rumbling bellies, too.

From tapas to specialty meats, there are some dishes you’ve just got to sample when you’re in the Spanish capital, so here are a few places to get your foodie fix…

One of the city’s oldest markets, the building was falling into disrepair until it was refurbished in 2009 when it proceeded to become one of the city’s most popular foodie hot spots.

Packed with stalls serving anything from oysters and wine to fish, bread, fruits and cheese, tourists and locals flock here to soak up the buzzy atmosphere and devour plates of food, which can be eaten on tables or the floor in the middle of the marketplace.

Hailed as the world’s oldest restaurant, Sobrino de Botin has been serving up grub since 1725.

With mentions in both the Guinness World Records and Ernest Hemingway’s novel The Sun Also Rises to its name, you’ll probably need to book ahead to secure a table at this historical haunt.

Whether you’re led up the original wooden staircases to the dining rooms, or down below to the cave for your meal, try ordering the specialty suckling pig, or “cochinillo”, which will be prepared in the traditional wood-fired oven as has been the practice there since the 18th Century.

One of Spain’s most well-known dishes, Cocido madrileño is served throughout Madrid, but there are a couple of places where it’s done extremely well.

While in the past, the est. 1870 Taberna La Bola has been a winner in the tourist stakes, there’s an alternative favored by locals that’s certainly worth a try.

Taberna de la Daniela is near the Goya Metro station, and is one of the best places to sample this traditional stew made up of chickpeas, meat, and vegetables; the ingredients of which are served separately as a starter (the soup broth) and main course (everything else). 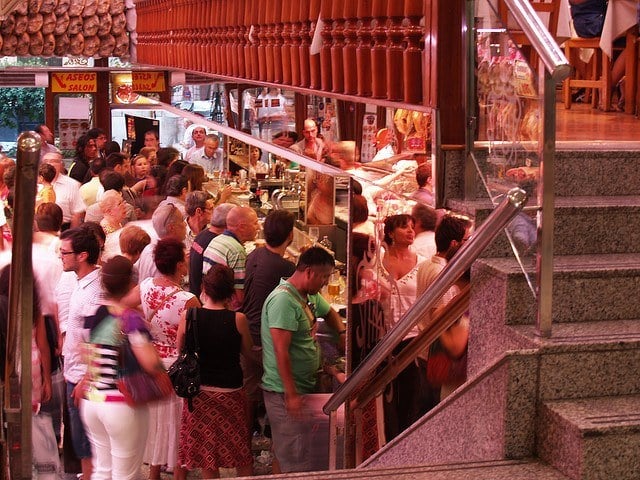 With branches throughout the city from Gran Via to Atocha, the Museo del Jamon – or Museum of Ham – isn’t so much a museum, as a restaurant and deli that serves cured ham cuts in sandwiches (bocadillos) croissants and as main meals.

It’s normally bustling with tourists on tapas tours and locals picking up a quick snack, and the interior is decorated with ham legs which hang over the counters where you’re served and eat your Iberico or Serrano, with a one Euro beer.

A great place to grab some food at a bargain price, before heading out to explore the rest of the city.

If you want to try out these foodie hubs for yourself, Hotels4U has great deals on hotels in Madrid, so click here to take a look at the website.

This post was written and brought to you by Hotels4U.

San Miguel Mercado is nice, but it's worthing checkin' out another market in a bit less touristic area : San Anton Market. The best in Madrid in my opinion. It's located in "la Chueca" (the festive-gay neighborhood). If you don't enjoy the place i pay you back*!

We had to unearth our own places to eat in Madrid as there wasn't much info out there for vegetarians and vegans. So, here's a good place to start if you're non-carnivorous like me:

Mmm one of my favorite foods in Madrid was the ham croissant..soo good!

I love the idea of a foodie holiday but knowing how much i love food a better plan for me would be 1st week = foodie holiday 2nd week = Bootcamp to work off all those 1 Euro beers.

Love Spanish food! Have to make it to Spain one of these days to try it as the local do.