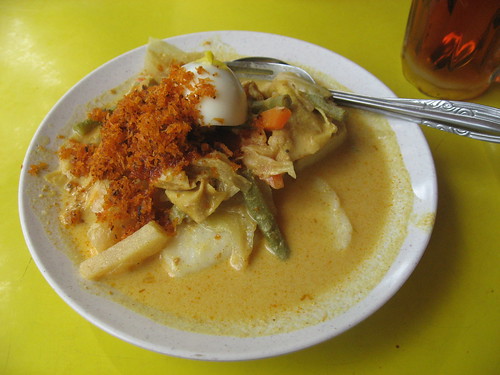 After a comfortable sleep, I spent some time on my federal/state taxes.

It was a luxury to have access to Ian's computer with fast broadband connection after so many slow sessions in Indonesia. Ian has a Ph.D. and seems like a regular Renaissance man.

He works at night based on American time, teaches classes at the nearby National University of Singapore, runs ItchyTraveler.com, and is managing a local club soccer team.

Despite the fact that I arrived a night earlier than he expected, he welcomed me in all the same.

We began our sightseeing with breakfast in the collection of food stalls outside his apartment block on Clementi Avenue.

My local dish consisted of rice and tofu in a gravy with a hard-boiled egg and coconut shavings.

I immediately realized my mission in Singapore would be to eat, eat, eat. 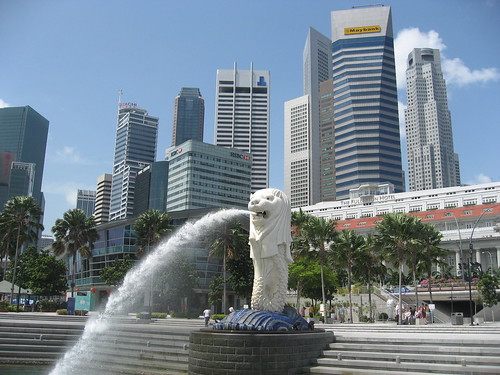 We took the clean and fast Mass Rapid Train to the business district, and after ambling past some of the numerous skyscrapers, arrived at the Merlion, Singapore's national icon.

Ian told me the story behind it, though I've since forgotten its origin.

Across the water, a gigantic construction project was underway to build Singapore's first casinos.

As I would come to find out, Singapore loves to build stuff. I've never seen so many cranes in such a small area. 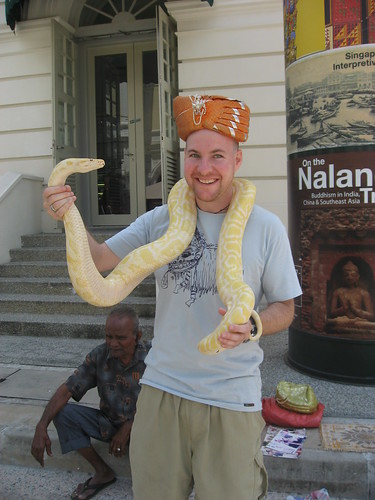 As we approached the spot where Mr. Raffle, Singapore's founder, first laid foot, I caught a glimpse of an albino boa constrictor.

Before I knew it, the owner had it around my neck and a silly hat on my head for a few photos.

Having just conquered a long-held fear of snakes, I gladly tipped him a few bucks.

Singapore Sling at the Long Bar

We ate at a hospital cafeteria where I had a tasty, filling, cheap Lemon Chicken Rice dish.

Then it was off to The Raffles Hotel for a Singapore Sling at The Long Bar, the place the drink was invented.

Anthony Bourdain fans take note, he made the same pilgrimage for the tasty libation.

I'm guessing he didn't have to cover the $18 cocktail as I did though!

After my drink, we made our way to Little India and Ian's favorite restaurant Lagnaa.

While he referred to her as his friend, we were actually meeting up with his girlfriend Waffa (not sure on spelling) and her friend who was doing a restaurant review for his travel site. 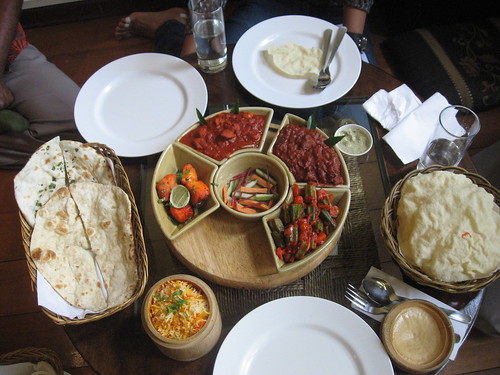 The owner/head chef of the restaurant was being interviewed when we arrived.

We joined them, and eventually enjoyed a fantastic and spicy array of Indian dishes.

When I initially asked for 4 on my chicken curry dish, the waitress laughed and talked me down to 2.

It turned out 2 was perfect for me, very spicy, though enjoyable. I couldn't imagine eating 4, let alone 6.

After stuffing myself further, Waffa guided me back to Ian's place where we watched a bit of American Idol before going back to the local food stalls for a little more food.

I ordered my first of two Tiger beers, which come in giant bottles.

And then it was off to sleep, with dreams of another day filled with terrific ethnic food.

Some great shots of a Singapore that has changed so much in the 30 odd years since I lived there.

Up until around 1974 the Island was a British Military far eastern see port and a Royal Naval Base and ship repair yard were situated on the North of the Island with one of the dockyard gates being to the left of the Causeway as you crossed from JB in Malaysia.

Your mention of Sir Thomas Raffles the father of Singapore brings back memories of the hotel named after him and where the Singapore Sling was born between the wars under British imperial rule. Just along the street used to be the Brittania Club which as youngsters we attended most weeks for the swimming and youth club particularly the huge scalectrix racing set that took up most of one of the upper floors.

As a family we were there for two and a half years as my father was in the Royal Navy and assigned to the Leadership School at HMS Terror the RN's land base within the Naval station.It was a pivotal part of my childhood and I intend one day to revisit a land I learned so much from.

OMG, that Naan looks amazing! Yay for Indian food. Isn't it weird to eat cultural dishes in a country (other than your own) where they are not from? It always makes me feel like I should be spending my calories eating the local food instead. And yet it's usually great. -Suz San Francisco Family Hotels

ps- I'm crammed busy with work for two weeks and suddenly I miss everything! ACK!

Ah, the Merlion - everyone's favourite projectile-vomiting lionfish! Hope you enjoyed the food in Singapore... it's got bugger-all else going for it :roll: