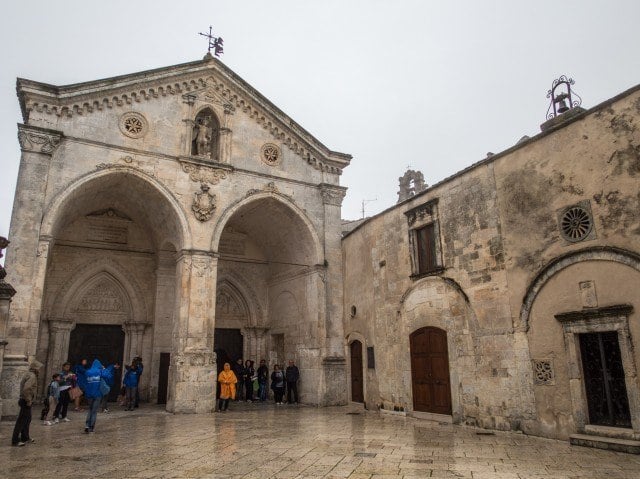 Entrance to the Monte Sant' Angelo

A few months ago, I was invited by the kind folks at Gargano OK, a consortium of local businesses, to tour their slice of southeastern Italy.

For years, its been known amongst Italians as a budget-friendly beach destination, but as I would quickly come to find out, there's much more to do here than lie on a lounge chair and work on your tan.

Our first morning was dedicated to visiting Monte Sant'Angelo, a UNESCO World Heritage Site, which would be the 98th on my ever-growing list.

This medieval town is perched upon a hill, occupying the highest point in Gargano.

As we drove up the winding roads, the weather turned from overcast to wet and windy, thus we didn't waste any time heading straight to the main attraction, the oldest shrine in Western Europe to the Archangel Saint Michael.

“The first appearance of the Archangel is said traditionally to have occurred in the year 490, however it is quite likely that the cult arrived in the Gargano in the mid-5th century or even at the beginning of that century.

Initially, the cult of the Archangel Michael was mainly a cult of natural, healing forces based on the Saint's  appearance and revelations – in line with the ancient pagan worship – and was strongly marked by oriental influences.”

Under the shelter of the portico, our guide informed us that over the centuries, Saint Michael had appeared to people on four occasions here.

The shrine has been a pilgrimage destination for much of that time, as it continues to be today.

Not seen in my photo above is an octagonal, 13th century bell tower, which was originally a watch tower.

Upon entering the building, one descends down a staircase to a pair of Byzantine bronze doors made in Constantinople and dating back to 1076.

Their 24 panels depict scenes of angels from the New and Old Testaments.

At this point, photos are still allowed however they are prohibited within the shrine itself.

Break this rule and you can expect the monk manning the small desk by the entrance to have a word with you.

Stepping through the doors is like stepping back in time.

The lower half of the room is formed by a natural grotto (cave), with upper sections showing the manmade stonework.

Looking straight ahead, and partially visible in my photo above, is The Chapel of the Most Blessed Sacrament.

To the left is a small Choir and The Chapel of the Relics.

Turning one's attention to the right, there are a handful of wooden pews, as mass is still held regularly within the shrine. They face the altar of Saint Michael, which features a statue of him from 1507.

The rain had let up by the time we left the building, but had it been nicer, I would've enjoyed walking through the streets of Monte Sant'Angelo to soak up a little more of the atmosphere from this town which dates back to the Middle Ages.

Thank you for sharing! Now I have to check out Monte Sant'Angelo when I go to Italy in early 2017!

I'll definitely need to check out Monte Sant’Angelo when I get over to Italy. Thanks for the inspiration, Dave!

I would say that UNESCO has the best World Heritage Sites! Beautiful architecture in Monte Sain'Angelo! Your "ever-growing list" is quite impressive!