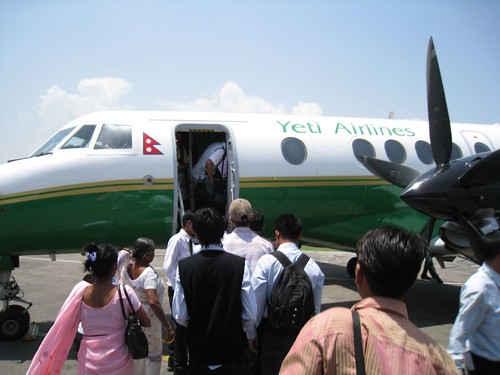 As much as I enjoyed playing chicken with oncoming traffic in Kathmandu's little white taxis, I was happy to have a seat on Yeti Airline's 11:40am flight to a small border town in southeastern Nepal. The 30 seat twin prop plane had a nice green and yellow paint job and I felt at ease boarding it for the short 45-minute trip. I noticed I was the only white guy, which surprised me given I was on the preferred morning flight for those heading to .

Seating was first come, first serve and I nabbed a single window seat in the front left, hoping to catch a glimpse of on my way out of the country. A pleasant stewardess kept us hydrated and the plane took off and landed exactly as scheduled. We flew at 15,000 feet however the clouds hid any potential mountain views. 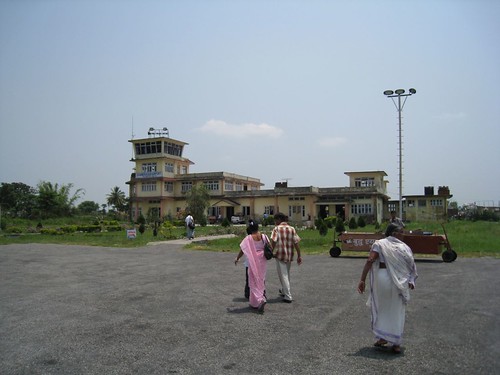 As we disembarked at a tiny airport, I was immediately struck by the heat and humidity of the lower elevation. I went to use the men's room and after a few seconds at the urinal, realized there was no pipe connecting the porcelain with the floor. I was basically pissing on my sneakers. I peered into the squat toilet which looked even fouler and resigned myself to such situations for the duration of my travels in . 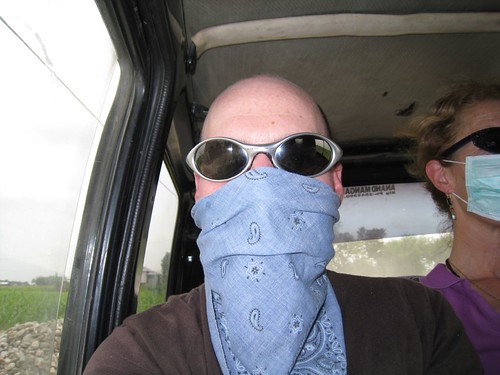 As I waited for my backpack, a Buddha Air flight landed and an older Swiss woman caught my eye. We recognized each other from the Indian Embassy and found we would be able to travel across the border and as far as Siliguri together. We shared a taxi to the border with two girls. Due to a local strike, we had to take an alternative route via dirt roads and small farming villages. The delay was minimal, though the extra dust required we all cover our noses and mouths.

We were dropped off near the border, along an endless stream of big trucks heading for . As we walked a few meters toward the border post, a guy quickly approached us and offered to take us to Siliguri. I changed my Nepali Rupees for Indian, we took care of paperwork in the Nepali immigration office, and took the taxi across a long bridge to the Indian border post. 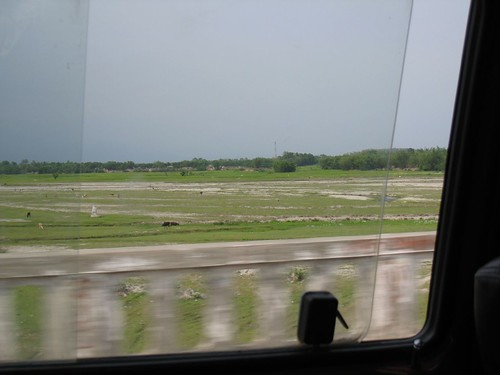 As we approached the immigration office, which was akin to a ramshackle single room hut, a guy in a white undershirt emerged from the house next door. Turns out the border guy lives next to his office. We filled out our paperwork, and then he wrote our information down into a large logbook and stamped our passports. We jumped in the taxi again and took off for Siliguri. 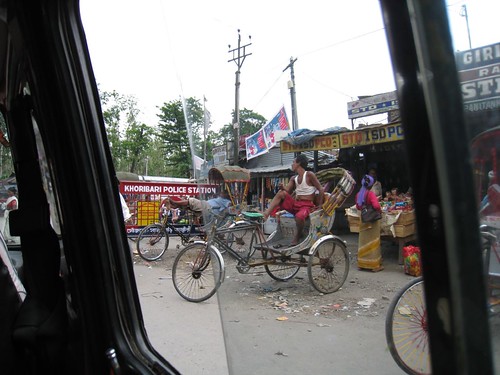 We arrived in Siliguri, a hectic transportation hub, just before 4pm. I said ciao to Bettina and was ushered to a share jeep heading for the hill station of , perched along a ridge 2,000 meters above our current location.

Note: I had the option of delaying my departure to by two days and making the journey with Natalie, Sara and their friend Cameron. All had traveled in before , however I felt as though I needed to do the border crossing on my own.

This website has got lots of extremely useful stuff on it! Thank you for helping me!

Hi Patrick, thanks for stopping by, and you're welcome!

Nice article , thx a lot for sharing info about the border crossing.Greetings from Belgium !

Hi Patrick, thanks for stopping by, and you're welcome!

Nice article , thx a lot for sharing info about the border crossing.Greetings from Belgium !