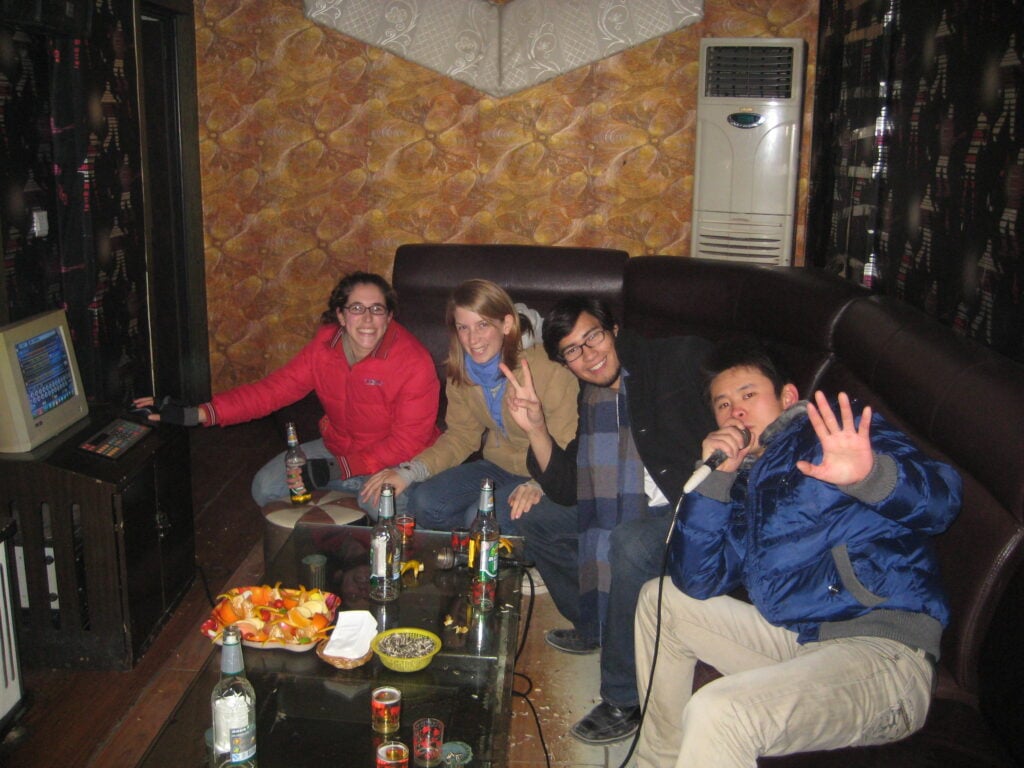 An ordinary night at a KTV place in Jincheng, Sichuan

So, if your idea of a good night is getting your hair washed (which does come with a 20 minute head massage) then you're in luck, but otherwise, you have roughly three options.

You can go to KTV. KTV is the Chinese karaoke (sometimes actually said as ka li OK). You go into a private room with your friends, select your music, and sing songs until your time there runs out. It also usually features quite a bit of drinking, sunflower seeds, and a fruit platter with interestingly carved items and cherry tomatoes. While KTV's private rooms eliminates the fun of watching your friends humiliate themselves in public at a bar, it does allow you the chance to sing as much as you want””or until you run out of English songs. If you do come to China, brush up on the Titanic song, Hero by Mariah Carey, and Edelweiss– the three songs I have been asked to sing each time we've gone to KTV.

You can also go to a tea house. Tea houses are nice because they are heated, which is not actually that common for places in this town. You sit in comfortable chairs and drink your 5RMB (less than US$1) glass of tea and generally either converse, or gamble. There are three major gambling games that I've come across. Ma jiang (mahjong), dou zi zhu (beat the landlord), and xiang qi (elephant chess or Chinese chess, depending on the translation). Of those, my favorite is dou di zhu, as it's basically a modified version of the game most college students know called As*hole. Or, as I called it for my ten-year-old campers, President.

Your third option is to play pool. Most pool houses here actually have snooker, not 8-ball, but some have both. No pool hall I've been to yet has had anything to drink or eat and they're not really leisurely– it's business time when you play pool in China. This can be a fun and cheap way to entertain yourself, but let's be honest- there are only so many games of pool you can play in a week.

And, last but not least, you have the drinking option. There are no bars in this town. There's nothing that even resembles a bar. Most people just drink in restaurants and then pour themselves into bed at an early hour because baijiu, their liquor, is incredibly strong. If you want to drink after a meal (novel concept!) one restaurant is decked out as if it were a jungle– ambiance fail? They're open into the wee hours of the night compared to everyone else– e.g. after 11 PM. You can always go sit in a private room there (private rooms are big here) and drink beer while admiring the fake ivy clinging to every surface.

So, the lessons from this are: