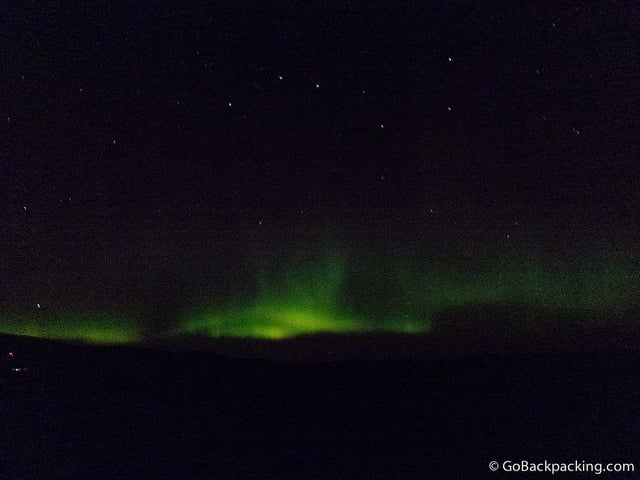 The Northern Lights in Iceland

[A]t 11:45 PM, standing in the pitch black outside Reykjavik, the bitter cold was almost too much to bear.

But standing in the dark, freezing your butt off is the price you pay to catch one of the natural world's most magical shows.

The Aurora Borealis, also known as the Northern Lights, arrived in Iceland early this year. Luck was on my side, as I'd scheduled my 10-day trip during the shoulder season, just as Winter snowstorms began to close the ring road along the northern coast.

A few nights a year, the Lights are strong enough to be seen through the light pollution of Reykjavik, but your odds of seeing them are much better on any given night if you take a ride outside the capital city. The clearer the sky at sundown, the better your odds.

I paid $37 to hop on a large bus with a few dozen tourists from around the world. The excitement on the ride out of the city was palpable. Along the way, our guide rattled off scientific facts about what causes the sky to turn various colors on cold Arctic nights.

In actuality, the Northern Lights in Iceland are present throughout the year, but the summer sunshine stretches too long into the evenings for them to be visible then.

Further out, our guide mentions the Lights are most active around a quarter to midnight, and that's when the real show begins.

It's only 10:45 PM when they first appear, faintly, out the left side of the bus. We're still driving toward the dark and desolate parking lot where we'll disembark the bus to wait, fingers crossed, for a show worth writing home about.

On the bus, though, we see enough to get our adrenalin flowing. The green lights aren't moving, but they're definitely unlike anything else I'd seen before.

Upon arrival at the parking lot, we're informed that the bus door will be left open in case we want to warm up while we wait. I initially shrug off the idea, and begin snapping photos of the Lights in the distance.

Several tourists are well prepared for the event, setting up their DSLR's on tripods to ensure clear photos in the near-total darkness.

My fingers quickly begin to feel the cold. The static green lights in the distance start to fade. I wait, hopping up and down to try and generate warmth. It doesn't work, and after ten minutes of waiting and hoping, I retreat to the warmth of the bus.

Inside the coach, I wait along with a dozen other people who could no longer bear the freezing temperatures.

True to the guide's word, around 11:45 PM, he enters the bus to inform us of the main event. I exit the rear of the bus and look up once again to the horizon, where the green lights of the Aurora Borealis can be seen dancing across the sky.

Unlike before, when they appeared in horitontal strips, they were now vertical towers.

Undulating up and down, they appear faint to my eye, but a darker shade of green in my camera's images. Surprisingly, my handheld Canon S100 is able to capture a few decent photos of the spectacle.

Later, I would have camera envy after seeing the crystal-clear clarity of photos taken with a DSLR and tripod.

The green lights put on an awesome performance for us that night, lasting a solid 20 minutes. The experience was well worth the cold, and cash.

In a way, though, the whole experience was anti-climactic. There were no polar bears drinking Coca-Cola, no soundtrack playing to multi-colored lights whose movements were sped up through time lapse video.

Witnessing one of nature's great phenomena, while raw and fascinating, may not live up to everyone's expectations.

But, you'd be crazy to miss the chance to decide for yourself.

Season: September to April. The tour company may cancel the same day if the sky isn't clear enough. If you go, and don't see the lights, most companies will offer you the chance to go additional nights until you do see them.

Where to Book: Any hostel or hotel, and most travel companies. Pick up from your accommodation is around 9:30 PM, and you can expect to get back around 1 AM.

What to Bring: Warm clothes, tripod, your patience.

Very cool! I saw the elusive Aurora a few weeks ago on Svalbard. Otherwordly!

Seeing the Northern Light is a spectacular experience that i recommend to everyone.

I HAVE to experience this once in my life!!! Amazing!