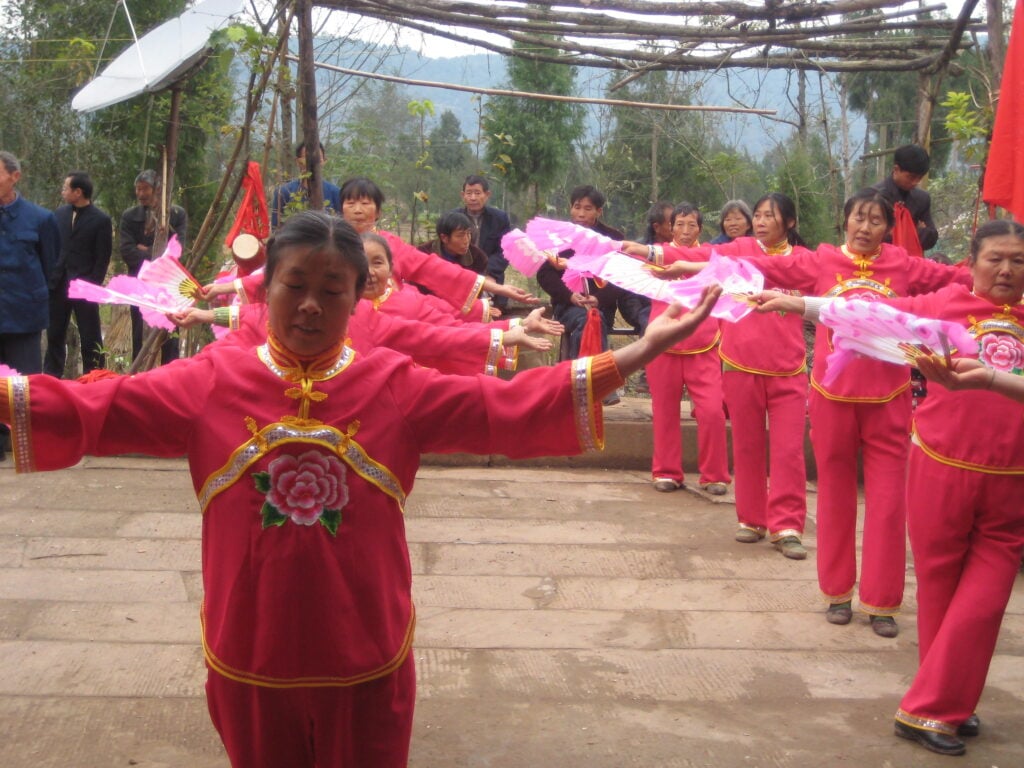 A common dance performance in a local village

For those of you who thought siestas were only for people working in Spain, you've obviously never worked in Sichuan before. Indeed, each day my microfinance organization has between 12 PM and 3 PM off for lunch, and a good xiuxi, or rest. This is the kind of thing that you don't learn in your Chinese class, and the reason that working in a foreign office is fun.

Here are some of the things I've found most amusing, note-worthy, or frustrating about working in an all-Chinese office in the countryside of Sichuan:

1.  I have yet to meet someone in China who does not have a QQ name. QQ is basically their instant messaging program, but it also has features that resemble Twitter or Facebook applications, all rolled into one. Most noteworthy is that one of these games is a garden-growing game that I've seen people of all ages play. It's basically like a tamagatchi (blast from the past) game where you simply water the garden and plant things. No winning, no losing, and no noticeable fun, yet everyone in my office has one. For the really hip, there is also a fish version– you feed them, they swim around, and yeah, that's all that happens. I mean, I've wasted my share of time on my RSS feed and I know others use Twitter– I guess since those things are blocked (in China), fake fish are the next logical option…

2.  One of my coworkers brings me presents of fruit most days. Lovely tradition– everyone enjoys getting an apple, an orange, or a really large pomelo on their desk on a Monday morning. True? True.

3.  Every office phone has a popular song as its ring tone, and each one goes off about 5 seconds after the first one. A cacophony of Chinese pop. Not really the professional, quiet demeanor I've seen offices strive for in the US, but it certainly does make you answer the phone more quickly. People positively run to answer them to stop the madness.

4.  Sometimes our power goes out– probably not that surprising for rural China. However, one time when it went out my office went on what can only be described as a field trip. We piled into the little buses that run out of our town, and went to watch the villagers nearby do a dance performance. It's still not clear to me if this performance was because we had a power outage, or if it was scheduled beforehand (see what I mean about not quite getting it all?) but either way, it was hilarious. They knew so many line dances, I half expected to see the macarena. In fact, maybe I should teach them the macarena…

5.  It's probably about 35 degrees here, yet all the windows in all of the offices are open. Why? Because of some combination of feng shui (we need the qi flowing) and H.E.N.E (that's what it sounds like if you pronounce H1N1 in Chinese– yi in Chinese is one) fears. As a result everyone clusters around the heaters in the room, which are open flames. Seriously. The heaters are gas fed and they could all double as cooking devices if you just put a pot on top of them. The combined silliness of gathering around a heater when the windows are wide open and there is a safety hazard of a flame in the middle of the room never fail to amuse this laowai (foreigner).