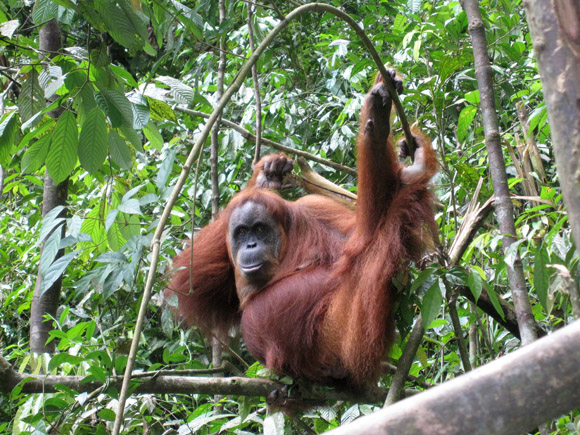 The name Orangutan is made up of two words in the Malay language, “orang” and “hutan.”

Together they make up a phrase that translates to “forest man.”

This reddish long-haired creature is the great Asian ape, presently only located on the islands of Sumatra and Borneo.

Unlike Mountain Gorillas that move on the ground, the remarkable aspect of Orangutans is that they are one of the heaviest animals in the world that lives and transports themselves through tips of the trees.

The biggest males can weigh over 100 kilos and still have the ability to swing through the branches of the jungle and rest in nests built in the treetops.

Gunung Leuser National Park, home to the Sumatran Orangutans is located just 86 kilometers from the congested town of Medan, on the giant island of Sumatra, Indonesia.

Orangutan tours are usually arranged in Medan before proceeding to the small town of Bukit Lawang where the trekking begins.

Sumatran roads are pounded by heavy rain and suffer from deadly potholes, so the roads were not exactly in top condition.

In order to get to Bukit Lawang, we took a series of battered buses and jungle taxis that artfully navigated the muddy terrain and vainly attempted to drive as fast as possible.

All that to say, the mere 86 kilometers took around four hours.

As always, it was a relief to arrive and I was ushered to a small room at one of the few guesthouses located on the rushing rivers edge.

My experience Orangutan trekking in Sumatra began the next morning, straight through the thick of the pristine forest.

We scrambled to make our way up and down mud bogged trails, fighting steep ascents and holding on from tree to tree.

The inevitable sweat poured off my forehead amidst the jungle canopy that locked the humidity in like a sauna. 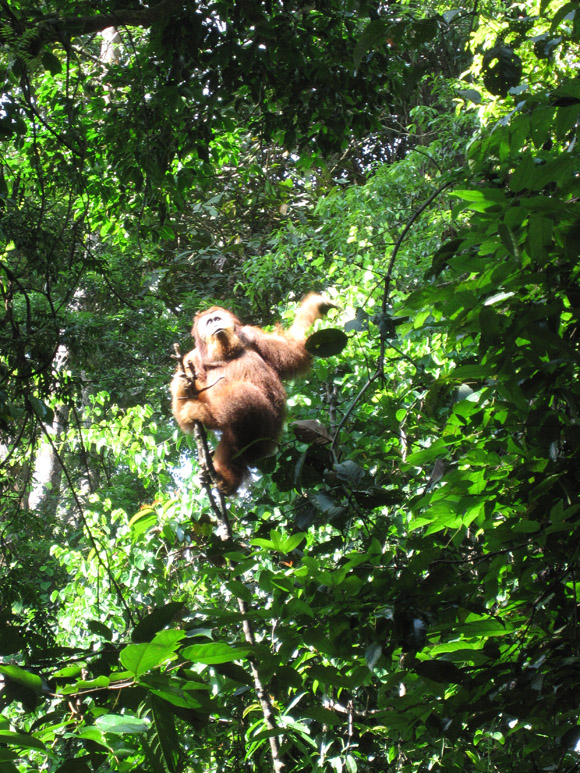 Swinging Through the Trees!

It took a few hours of navigating through the tangles of the forest until we heard the rustling of trees and the faint sound of our first Orangutan!

The sound was coming closer, rapidly. Within seconds the rustling of the trees high above were swaying and bending right in our direction.

The guides informed us that a male was chasing his girlfriend through the trees, attempting to find some love. It was a truly magnificent sight.

The bulkiness of the Orangutans miraculously swung through the branches of the trees with effortless ease.

The weight of their heavy bodies was supported by rubbery limbs that seemed to just bounce from tree to tree and then spring back as the ape released grip.

Soon the Orangutan crew settled down, watching us as we watched them.

Their lanky arms reached out to grab hold of far out limbs and swing around.

Their playful nature involved entertaining bursts of sudden chasing each other around the perfect jungle gym. 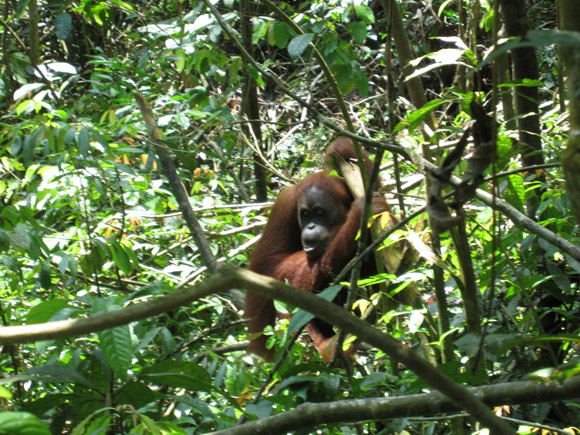 Posing for the Pictures

The guides knew each and every Orangutan in the area by years of guide experience, making it easier to approach the apes and observe them closely.

One massive Orangutan posed in a low tree, showing off his photogenic skills and lazily rearranging his position every now and then. 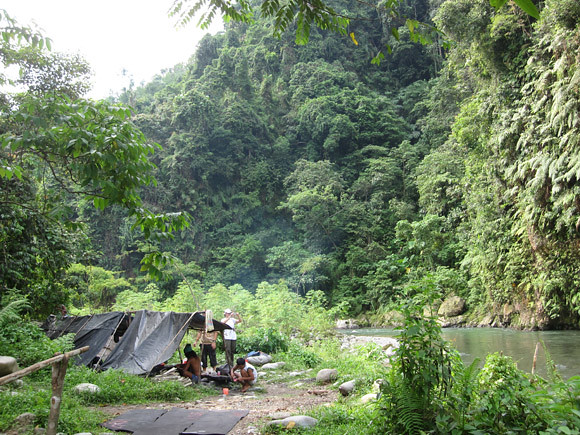 In the evening we settled in a makeshift camp, a beautiful scene on the side of the river surrounded by rolling hills of the sprawling forest.

The sounds of the jungle played like a symphony and we could hear the wailing calls of the “forest man!”

Hi Again, You can check out this Bukit Lawang website created by an English guy married to one of the local women. http://www.bukitlawang.com/Forum/tabid/102/forumid/1/scope/threads/Default.aspx

Are you able to pass on the guide and cost information? my wife and i are heading there next month.

My wife and I will be visiting Sumatra later this year and this experience is very much what we're looking for.

Can you pass on the name of the tour company you used for this trek?

Hi Mark, do you recommend the tour company you used for the trek?  If so I don't suppose you remember their name???  Thanks!