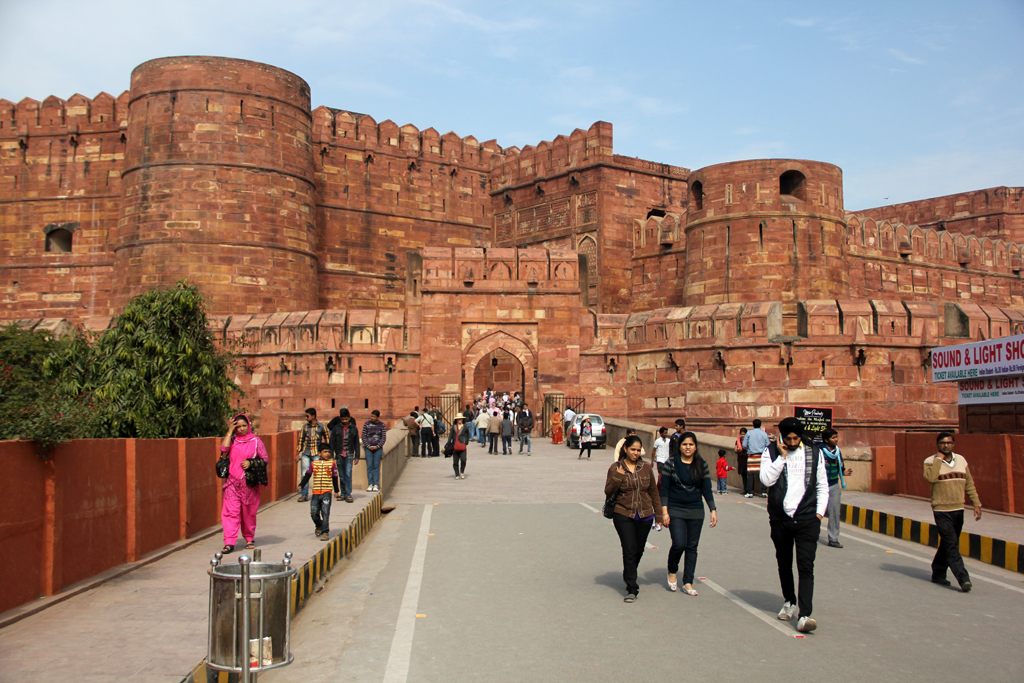 [T]he Taj Mahal is majestic, but Agra's slightly lesser known attraction, the Agra Fort, in my opinion is equally if not more impressive to witness.

A couple years ago, Dave visited Agra, so I'll just share a few of my favorite photos of the Agra Fort from my recent vist. 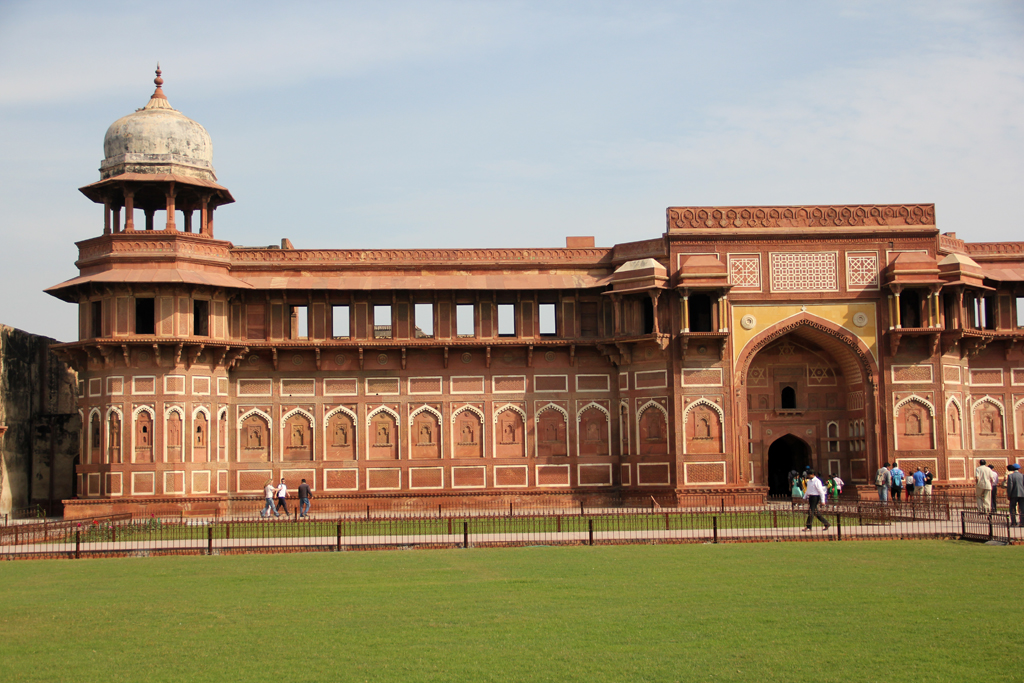 As soon as you enter the fort, which is actually an entire walled in city, you'll notice the outstanding preservation and design of the structures.

The Jahangiri Mahal is one of the landmark buildings within the fort. 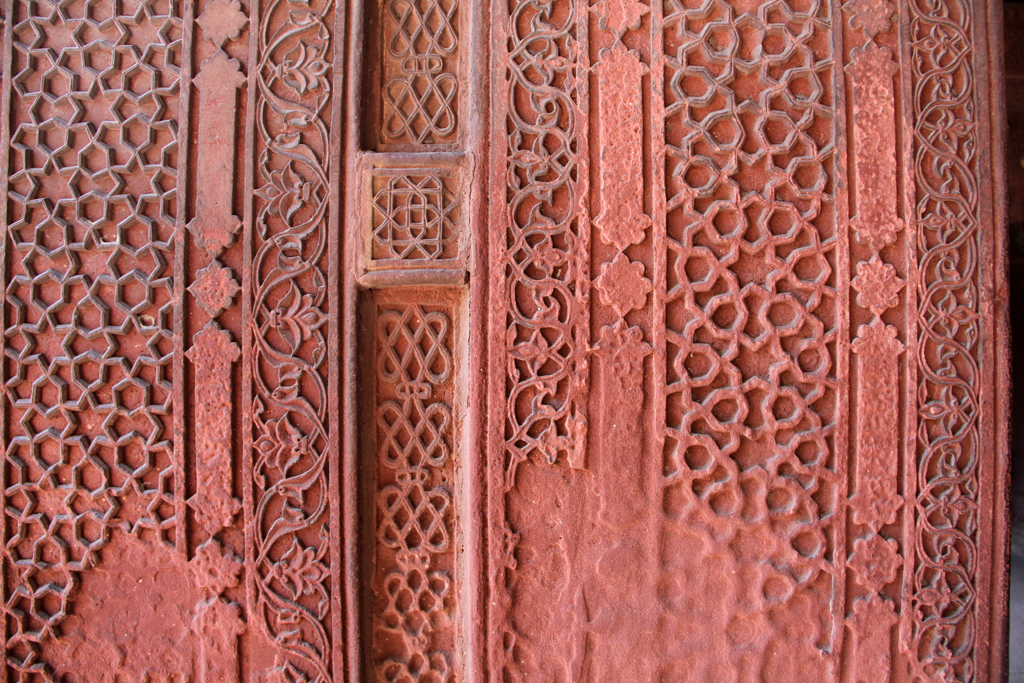 Carvings in the red sandstone

While I love to look at historical buildings and architecture from a distance, it's also nice to see close up detail, and there's no shortage of magnificent detail on the walls and decorations of the fort. 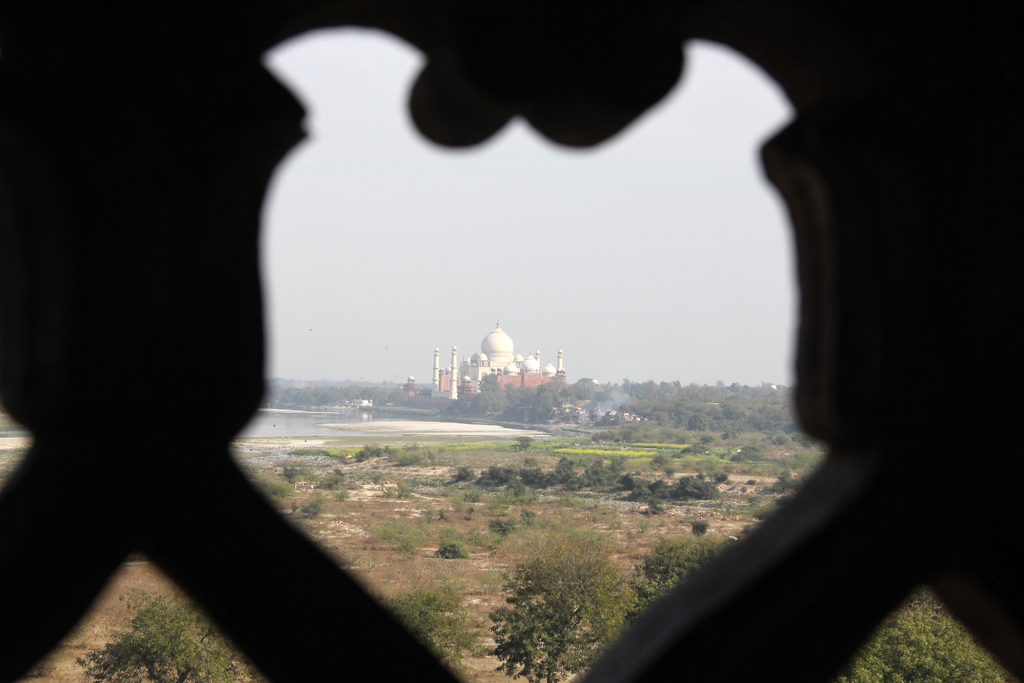 View of the Taj Mahal from the window

The Taj Mahal is only a few kilometers from Agra Fort, so looking through the windows or from the verandas you can get a great view. 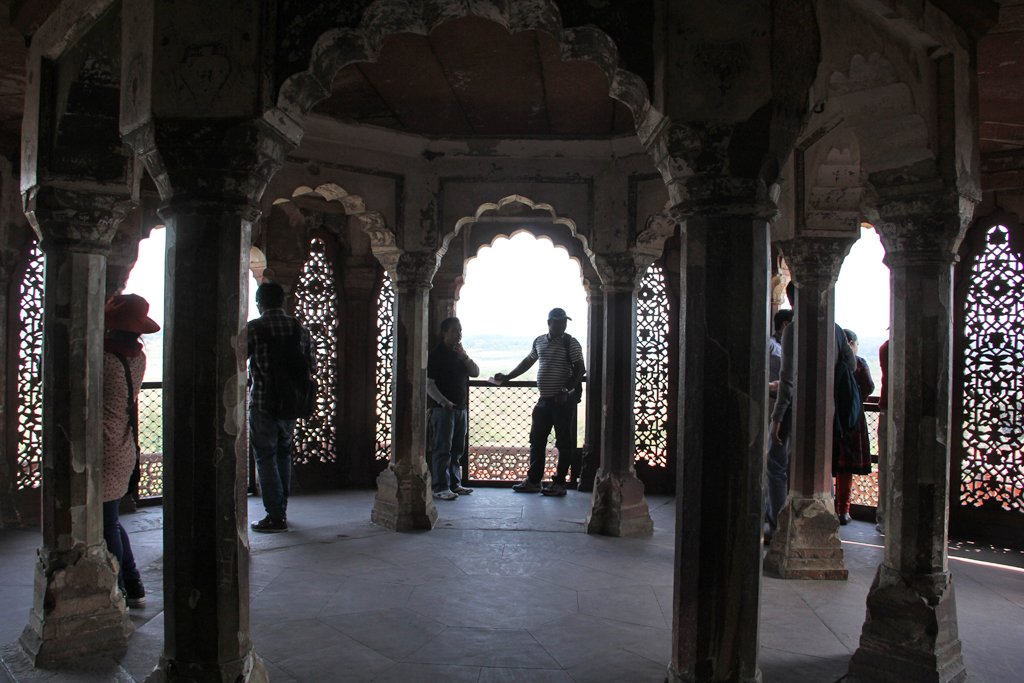 One of my favorite rooms was this octagonal look-out room that was surrounded by Mughal arches and full wall sized windows which are covered with latticework carved from marble. 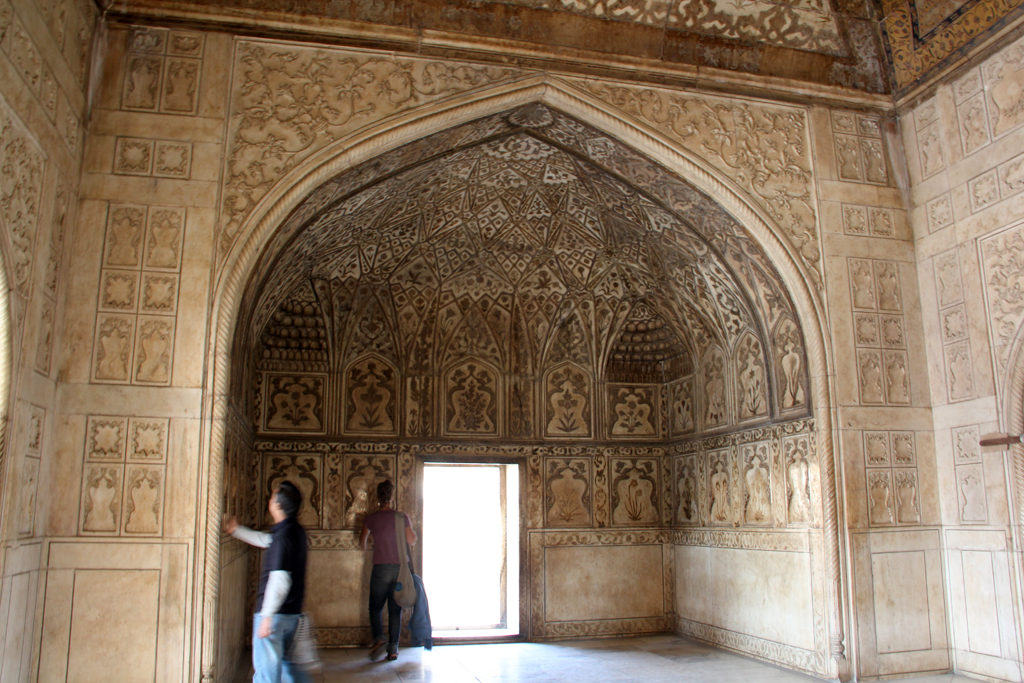 A room of pure marble

The Agra Fort is constructed mainly of red sandstone and white marble. The carved marble halls are amazing, incredible displays of Mughal Islamic architecture and artwork. 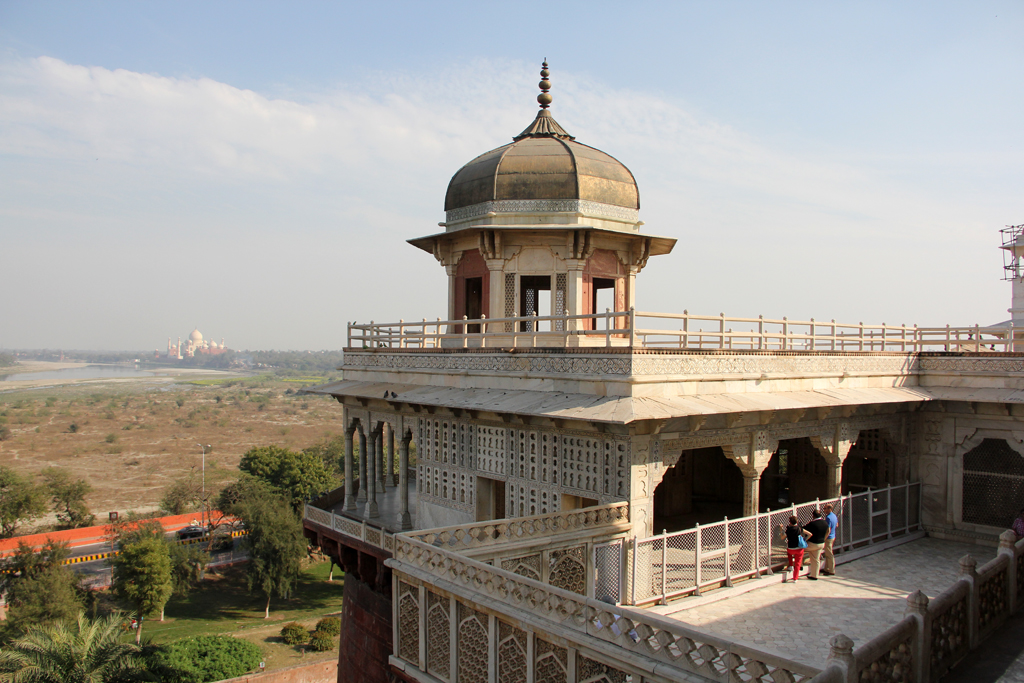 Again, there's a great view of the Taj Mahal from this section of the Diwan-i-Khas, a part of the fort that was the hall used for private royal guests. 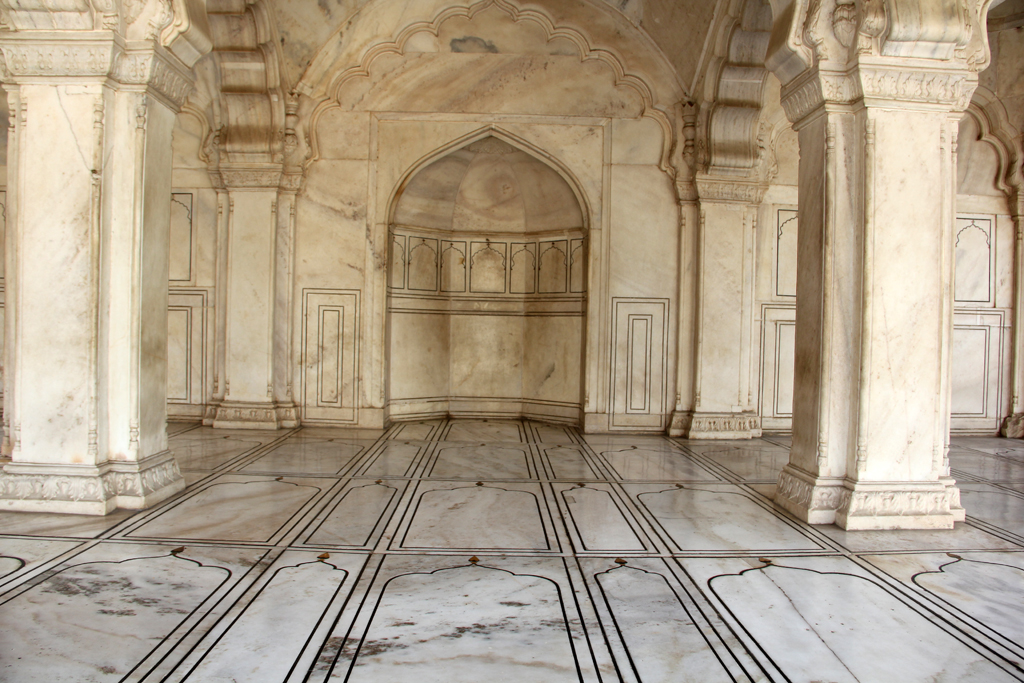 Within the walls of the fort is a small private mosque, called the Nagina Masjid, and built from pure marble. It is very small, yet the craftsmanship and design are extraordinary. 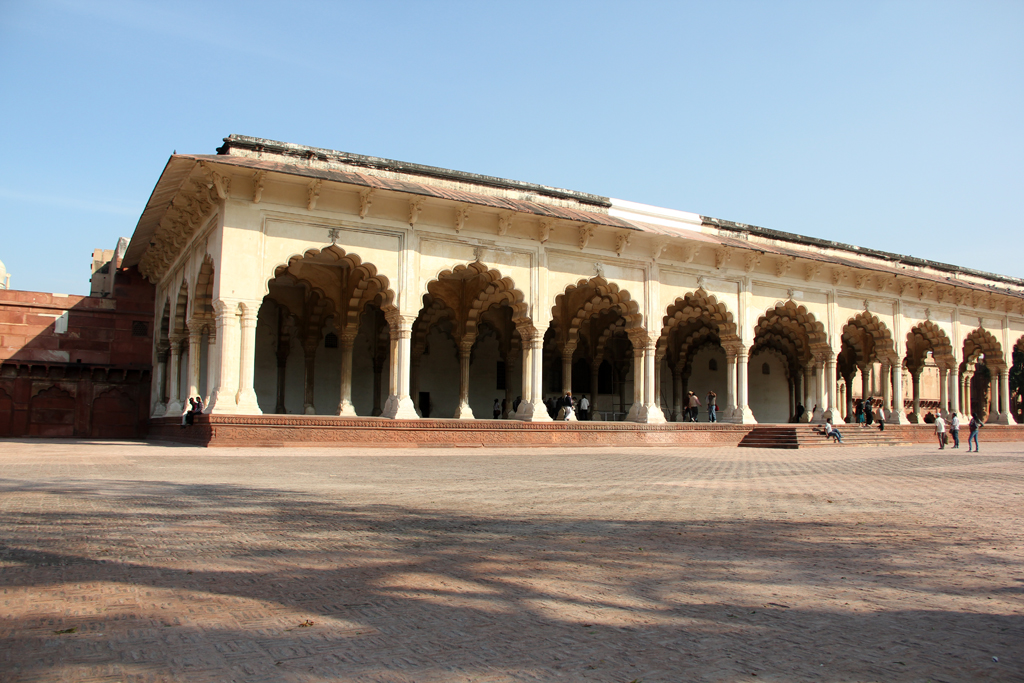 Finally, at the front of the fort is the Diwan-i-Am, a public hall where members of royalty associated with guests and held public discussions.

While Delhi also has a similar Red Fort, I thought the Agra Fort was more awe-inspiring.

When visiting Agra, definitely spend time admiring the Taj Mahal, but ensure you have enough time to thoroughly explore the Agra Fort as well.

Agra Fort indeed looks impressive! I'm actually surprised that you managed to snap some shots with minimal tourists in them; I would have thought the place would have been completely jammed!

One of my favorite places in India!!