During a one week swing through Switzerland two years ago, I took a bus from Interlaken to a train, to a tram which rose to an elevation of 10,000 feet amongst the jagged mountain peaks of the Swiss Alps.

My destination? A rotating restaurant on Schilthorn peak, which was built for the James Bond movie “Her Majesty's Secret Service.” It was there that I enjoyed my one and only lunch atop the Swiss Alps. 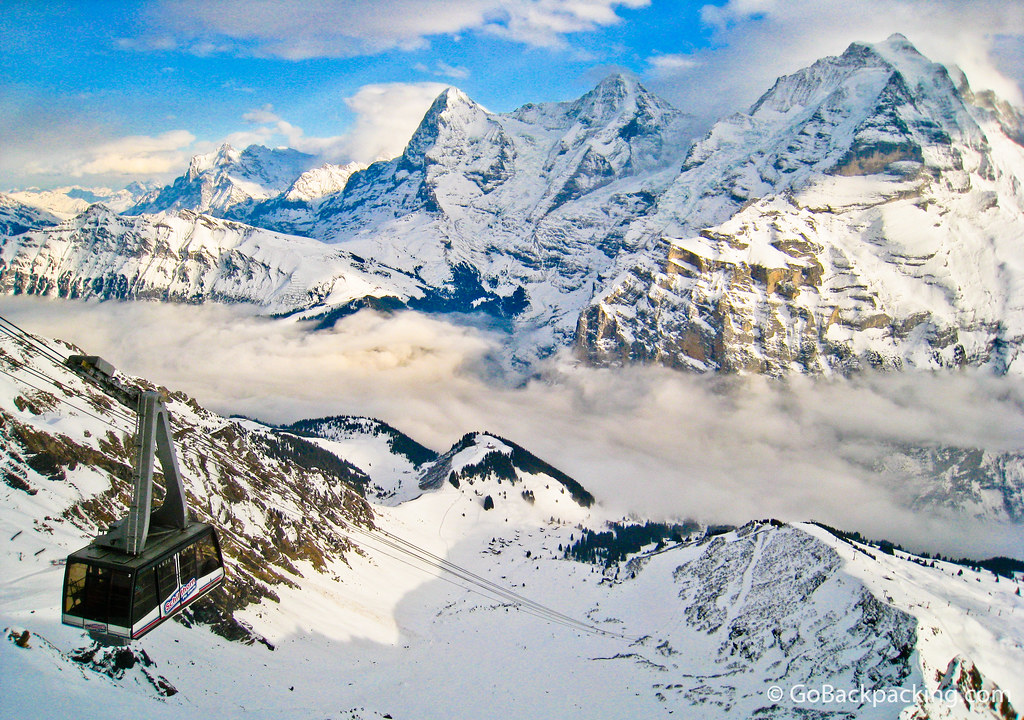 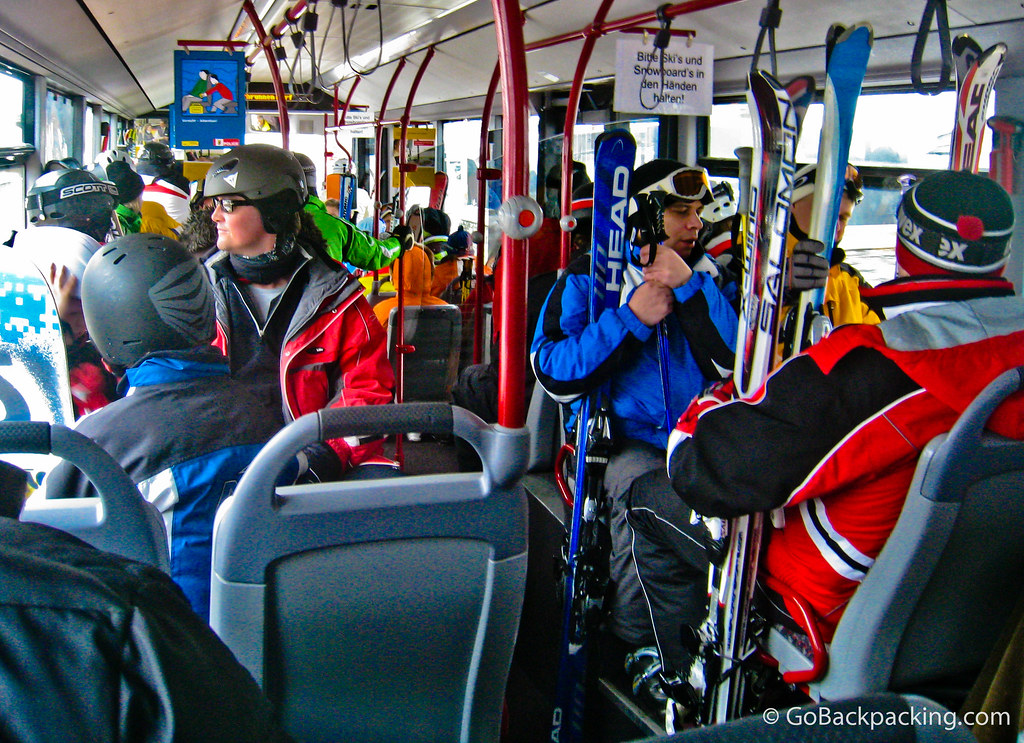 An Interlaken bus loaded with Skiiers and their equipment. The scene reminded me of the old Warren Miller ski videos I use to watch as a kid. At the time, I dreamed of skiing in Switzerland, and the irony of not skiing once I made it as an adult was not lost on me! 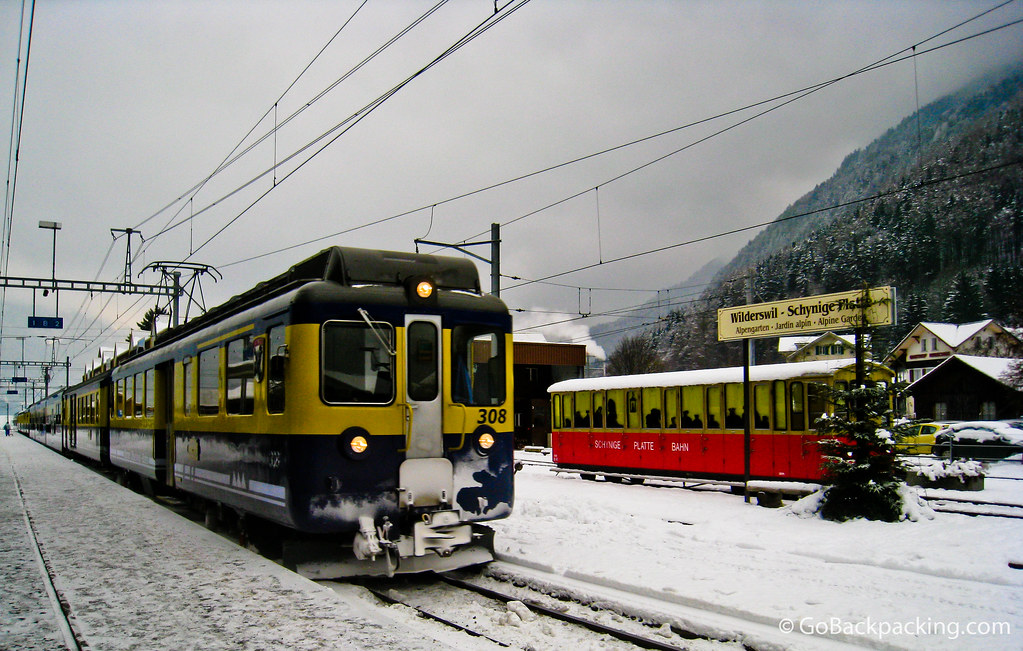 For those without a car, taking the train is one way to reach the tram to Schilthorn. 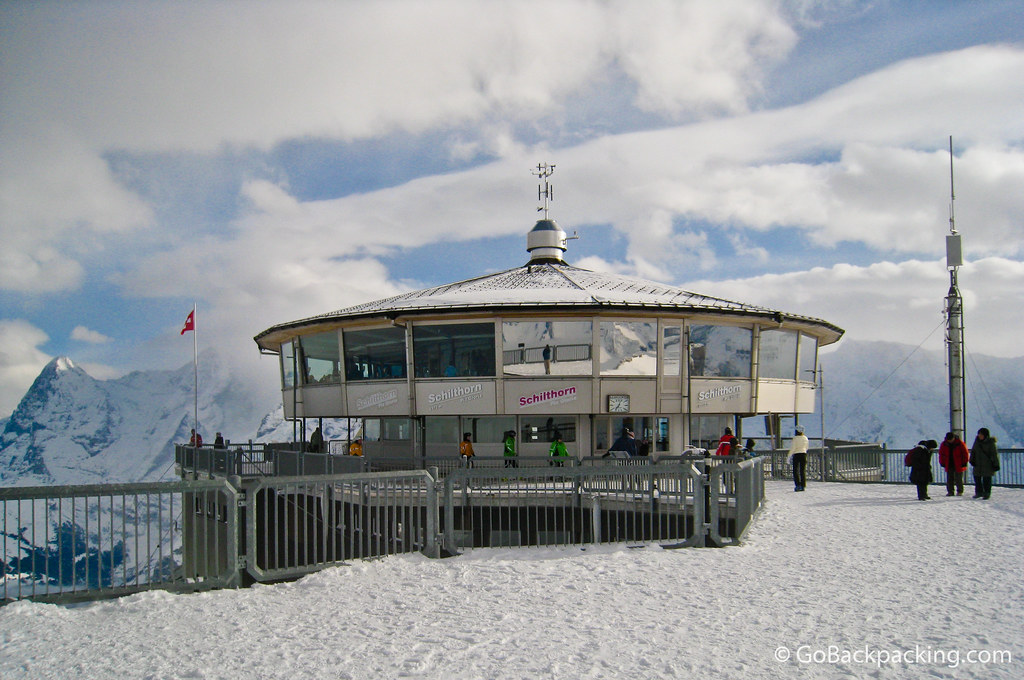 The rotating restaurant built atop Schilthorn (10,000 feet) was the scene of the James Bond movie “His Majesty's Secret Service.” 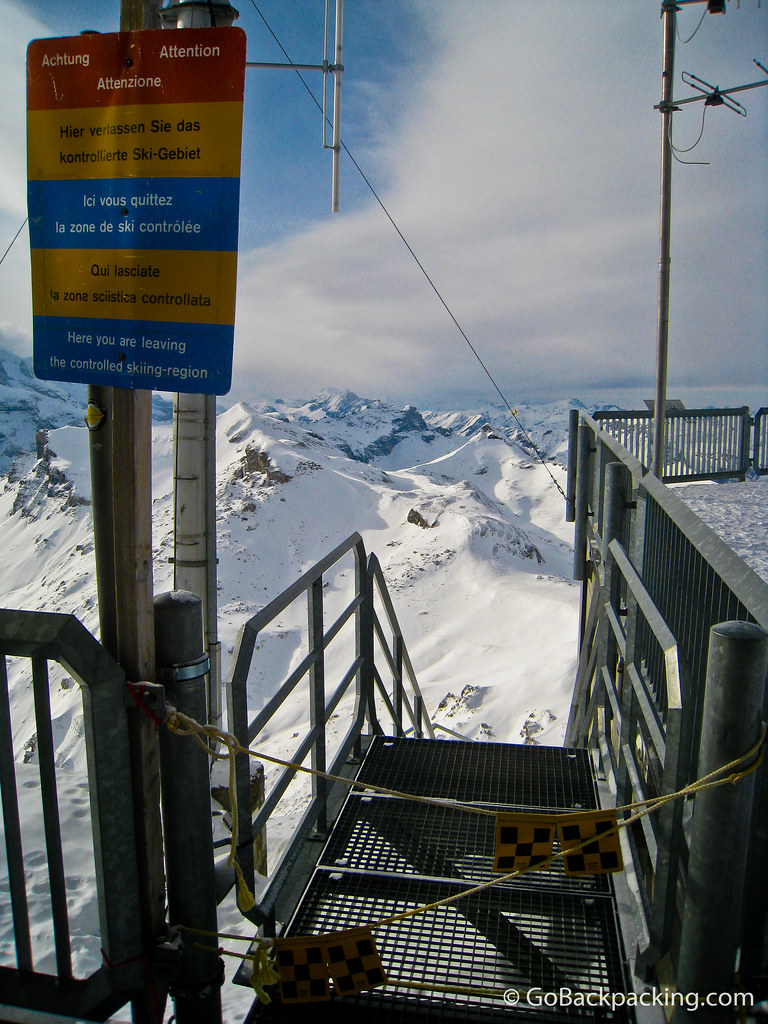 A warning sign greets skiers and snowboarders considering the off-piste (out of bounds) terrain atop Schilthorn.

The mountain peaks of the Swiss Alps extend as far as the eye can see. 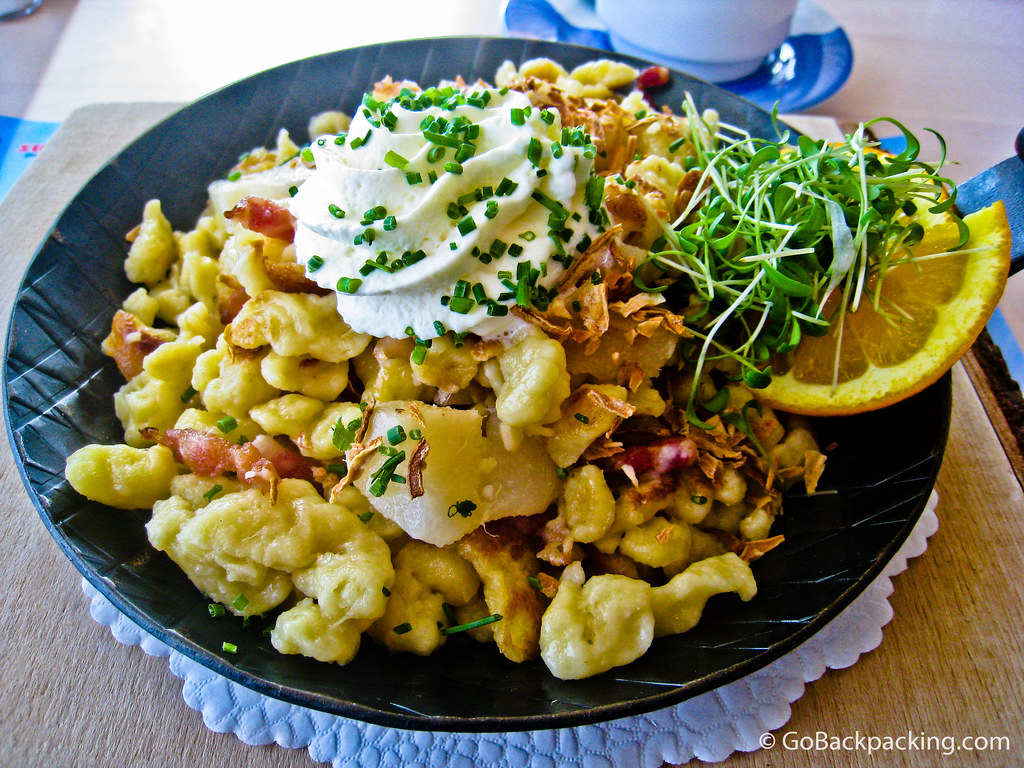 For lunch, I ordered Spatzli Delight: mini dumplings with homemade cheese spaetzle, bacon, roasted onions, and pear slices. And hot coffee to drink. It was as delicious as it looks!

A look back at Schilthorn from the descending tram. It was mid-afternoon, and the sun was already heading toward the western horizon. 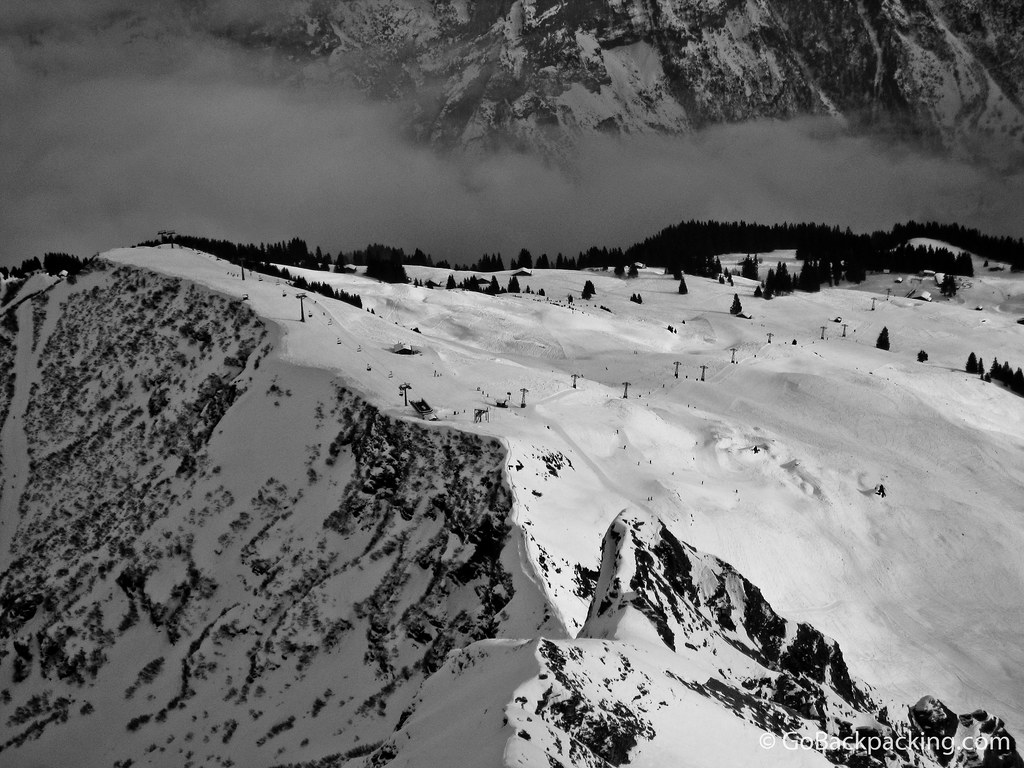 A ski lift as seen from above on the tram. The little people on skis below helped to give me a sense of scale. 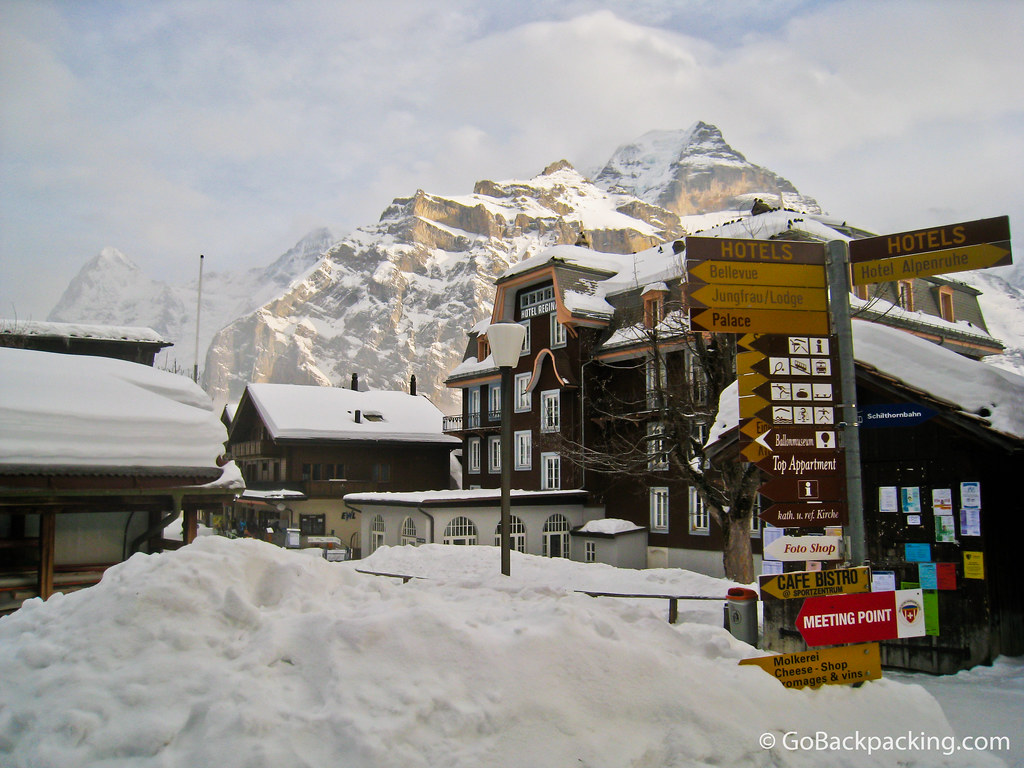 On the way down from Schilthorn, I stopped midway to walk around a small ski village. There wasn't much to see except for a few small shops selling food to the skiers who rent condos up there.

Beautiful photos! We've been to Switzerland and can't wait to go back, your photos make me want to plan the trip soon!

Your photos look amazing and Skiing in Switzerland is awesome. But often a litte bit expensive for students and backpackers. I prefer going to France. Though there the "Käs Spätzle" are missing. =)

Switzerland hill photos fantastic. No one can't see without come this website.very nice. thanks for sharing this information

Gorgeous views! Looks so calming. And that lunch, it's making me hungry! What a perfect day.

Wow the Alps are truly amazing!