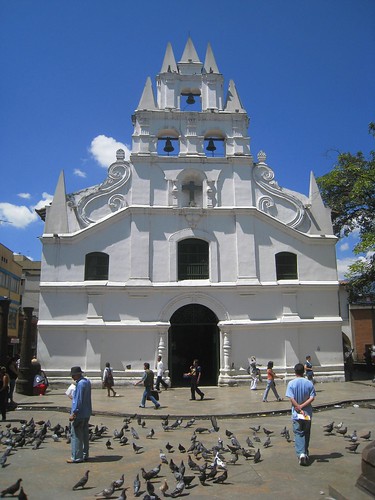 On a beautiful Monday, I took the metro to Parque Berrio in the city´s center.

My first sight was the whitewashed Ermita de la Veracruz, considered to be the city´s oldest church with construction having begun in 1682. 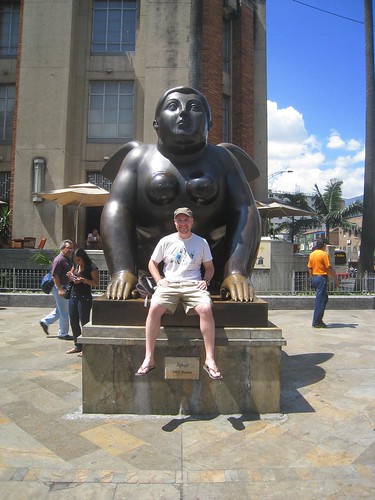 Posing with one of the 20 Botero sculptures in a plaza

The main event of the day was a walk through Botero Plaza as it has been dubbed, on account of the more than 20 large bronze sculptures which pepper the space. Colombian tourists, as well as westerners like myself, take turns posing by them.

Given his proclivity for depictions of nude men and women (in particular his take on Adam and Eve), it is not surprising to see some scandalous photos being shot. 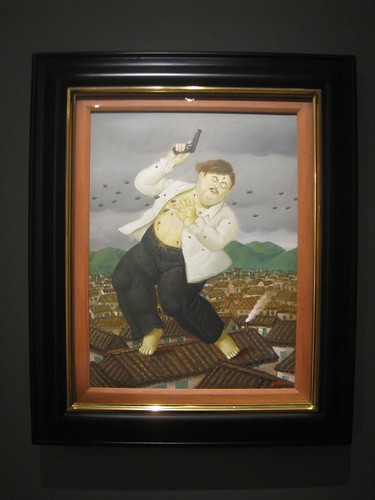 I walked through the Museum of Antioquia, which is another of the many inexpensive cultural attractions the city has on offer. By the time I was finished, I´d had about as much of Fernando Botero as I could handle.

I took a photo in a dark gallery of a rendition of Pablo Escobar´s rooftop death in a hail of police gunfire, however I was soon tracked down by guard, having been clearly spotted on video camera no doubt.

For the record, even though I didn´t ask in this museum, photos without flash were allowed in Bogota´s Botero museum (which featured almost this exact same painting). 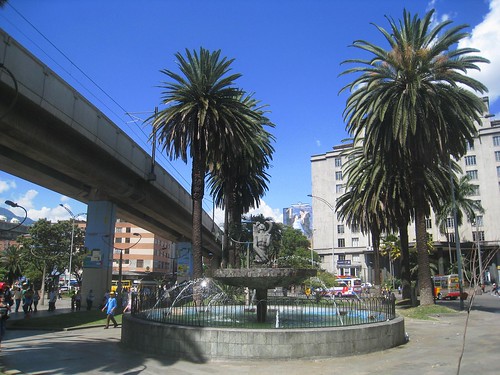 A fountain in the foreground, with the metro tracks behind

When it came time for lunch, I asked a tourist official for advice on how to find one of the eateries where Anthony Bourdain dined in Medellin on his Colombian episode of No Reservations in 2008.

While I had yet to watch the episode, I had obtained the information off of the Travel Channel´s website.

Unfortunately, La Queareparaenamorarte at Partidas de la Fe el Retiro in Antioquia is not actually within the city limits as the site suggested. It was an hour or more away by bus.

Instead, I asked for a recommendation from the guide and he suggested Hato Viejo (which I later found in Lonely Planet as well). 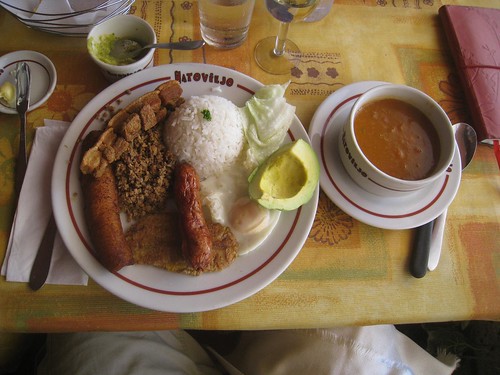 And all of this was on top of the free appetizer of arepas and mini empanadas. As you might imagine, I was unable to finish. I didn´t even touch the bowl of refried beans. 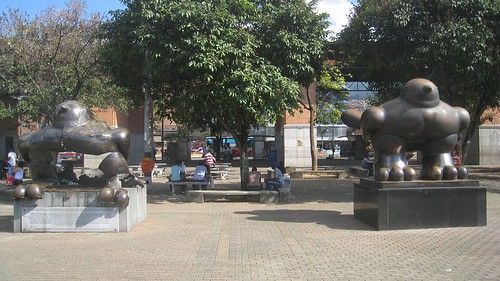 I managed to walk a little of my lunch off before heading back to the hostel to lie down. Along the way, I passed through Parque San Antonio which features two more of Botero's sculptures.

On the left, his original Bird of Peace (Pajero de Paz), which was damaged by a guerrilla-placed bomb. It was left in place, and now features a plaque dedicated to those who were killed or injured by the blast. A new Botero bird has since been placed alongside it.

Although this was a very informative piece, there a two things you should correct. 1. The free appetizers you were offered were arepas not arrapas. which are savory cornmeal cakes. 2. Colombians do not eat refried beans (Central Americans do). Those were stewed beans and you definitely missed out on great beans. I am very glad you enjoyed your stay in Medellin, Colombia.

Thanks Karla. I wrote this post 5 years ago so I'm not surprised I misspelled "arepas." Fixing it now. When it comes to beans, I'll admit I can't tell one kind from the other, although since I've spent more than 2 1/2 years in Colombian since this meal, I've certainly eaten my share.

I even started a blog about Medellin, you can view it at http://medellinliving.com

the bird statue!!!! there's one in Singapore located along the Singapore River at Qlark Quey

the bird statue!!!! there's one in Singapore located along the Singapore River at Qlark Quey