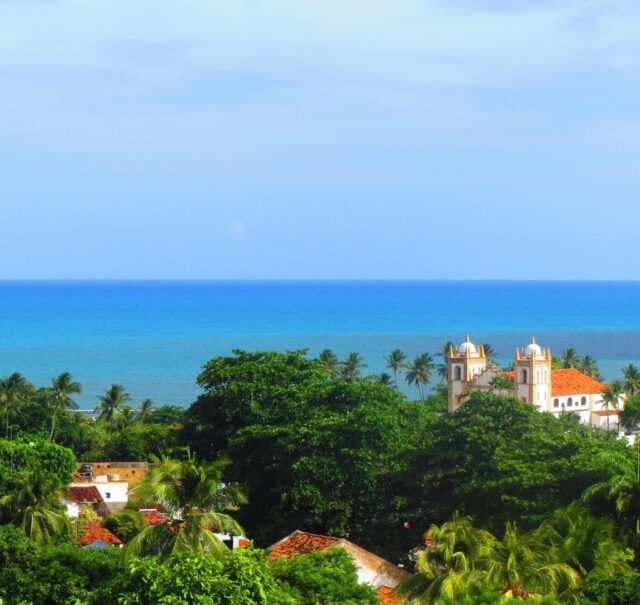 The small colonial town of Olinda and stunning views from its hilly neighborhoods.

Because of that helpless feeling, I got when I was lost, I almost didn't make it to Olinda, the real jewel of this area.

It's 20 minutes from Recife and full of beautiful colonial architecture and a great view of the Atlantic ocean.

It's a sleepy town, so I was planning to go for only one night. I ended up staying two, to see the pre-Carnaval celebration that started over the weekend.

There are good restaurants here too, to cater to all the tourists. But I didn't try any. I was content to have street food and other cheap eats.

I wanted to save my money for two beach stops I would eventually make, both of which you'll read about later. 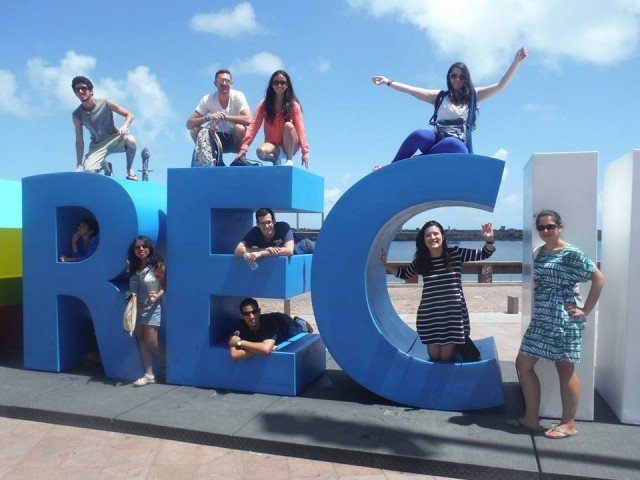 The big letters at Marco Zero, where the Portuguese landed, is a popular hangout for locals and tourists.

It took me all of 10 minutes in the city to get lost.

I had no idea the last stop would be a bus terminal at a remote location outside the city.

I started to figure it out as the bus continued west, through some of Recife's rougher neighborhoods.

I was supposed to have gotten off the bus at the airport terminal. I later did, after taking another bus there.

Then it got interesting. I asked the information desk about how to arrive at 870 Camboim, the address of the hostel.

Five people proceeded to argue whether there was a hostel there, before even tackling the most important question: How, exactly, do I get to that address, hostel or not?

We settled on a taxi, and the driver wanted to argue whether there is a hostel there or not as well, and I was adamant there is, let's just go and deal with it later if the hostel has somehow vanished like David Blaine.

We found it. It took us all of 4 minutes to arrive.

Recife is a big city, easy to get lost in, a place with rows of high rises, new, old and upcoming, an industrial port city that has its rough areas around downtown before getting to the posh coastal areas in the north and south.

It has a Metro that reminds me of the L Train in Chicago, and buses that go everywhere, so public transportation is not lacking.

It's just hard to figure out which bus/Metro combo will get you where you want to go.

I thought hard about leaving, but then I thought, “Nah, that would be too easy. Sack up and see what happens.”

As I said, I never would have made it to Olinda if I just packed up and left quickly.

I would not have seen the Marco Zero either, the place the Portuguese landed in 1537 when they got to what is now Recife.

I learned about the culture too, about how the people in the state of Pernambuco have an immense sense of pride, that they are industrious people and they have a clear rivalry with Salvador, another popular destination in the northeast.

I even met someone who works in the tourism industry, a young woman who explained that Recife is an up-and-coming tourist destination, partly because it's a jump-off point to Ilha Fernando de Noronha, one of Brazil's prettiest places, from what I've heard, and I hope to find out myself someday. 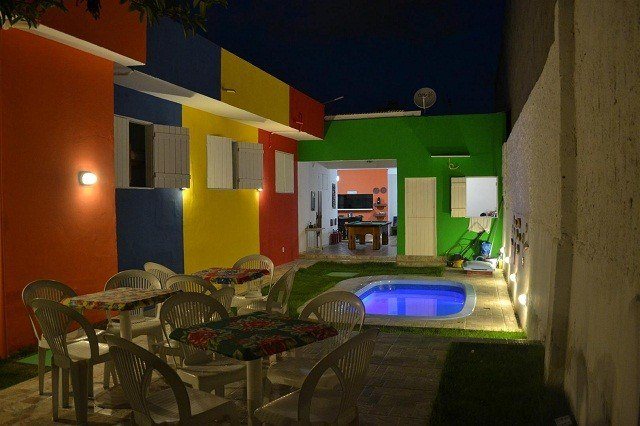 Arrecifes Hostel in Recife was one of the most comfortable places on my trip.

The place felt comfortable as soon as I walked in Arrecifes Hostel.

Maybe it was because it was late at night, and I had just made a six-hour bus ride, plus another hour trying to find my way back to Boa Viagem after getting lost, but I came to find out that the first impression was on the money.

On this day, I just worked the whole time, getting caught up with my planning and writing, and I even took a dip in the pool after lunch, for relief.

The staff was helpful the whole time. Anything I needed, they assured me, they would help.

I didn't need much.

The hostel has a big plasma TV, usually with popular music playing, along with a small pool and a pool table.

There's great Wi-Fi and lots of space to relax, a big kitchen and a great breakfast in the morning, a spread with eggs, couscous, ham, cheese, several types of bread, fruits, coffee, chocolate and fresh-squeezed juice.

I especially liked the juice. They didn't load it with sugar so I could enjoy the fruits' natural flavors.

It was great to wake up to that for half a week, each night great sleep in comfortable dorms.

The private rooms looked nice too. Two are air-conditioned, along with two of the dorms, for those who can't stand the heat.

I eventually did need something: directions. I was trying to break this getting lost trend, and they looked up the bus routes I needed to get to the other side of the city, the north end, where friends of mine had gathered for a night of chatting and a few drinks.

This time I didn't get lost.