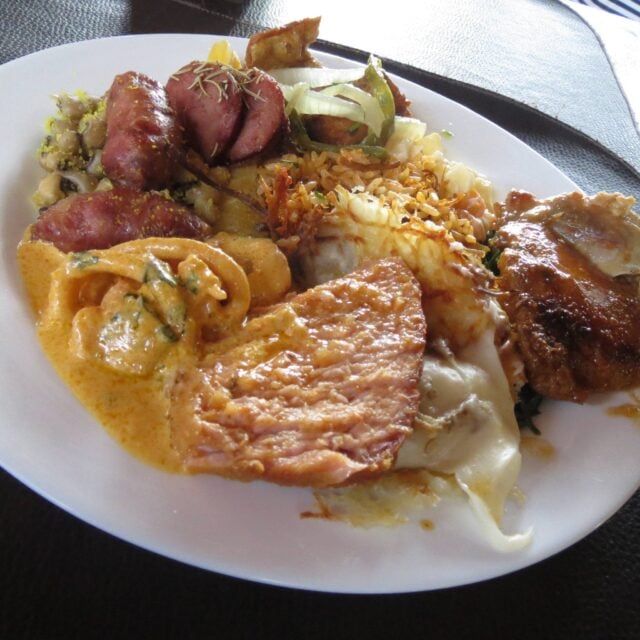 I love churrasco, and enjoyed it several times on my trip, but because I had eaten it so many times in the United States, it just missed my Top 5.

One of the best parts of traveling is eating, trying the cuisine in a new place you’re exploring.

Thanks to a good stint living in South Florida, I had already tried some Brazilian food.

That’s why I won’t include churrasco in this post (pictured above), even though I love it. I already had my fair share.

Here I’m going to tell you about the dishes I tried for the first time, and (spoiler alert) the following list of my favorite foods from northeast Brazil will be heavy on seafood.

I hear that’s one of the big differences in the cuisine between the north and the south, that the north leans more seafood, the south more meat.

I plan to find out for myself someday, but for now I’ll just focus on what I know.

As I tried to decide which ones were best, I considered several factors.

The first was taste. That should always be No. 1.

The second was cost/taste ratio. I don’t mind paying a lot for food I love. It’s when I eat something average for an exorbitant price that I am annoyed.

The final factor was, if I were on a date with Marília, what kind of dish do I think she would like?

I believed that at some point we’d be eating together so I said to myself, “I gotta think about this too.” 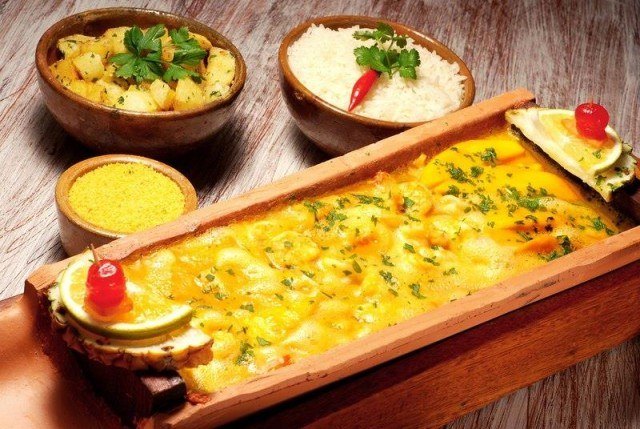 I love moqueca so much, I'll learn how to make it soon. (Photo: Peixe na Telha)

Moqueca, a soup made from coconut milk with lots of seafood, was easily my favorite dish.

Sad to say I had it only once, at Itaparica, an island in the bay by Salvador.

I thought about ordering it in Porto de Galinhas, but I went with another option, something you'll read about soon.

I thought about eating it more often but I held out because I still wanted to crave it when I returned to Colombia, so much so that I would learn to make it myself. 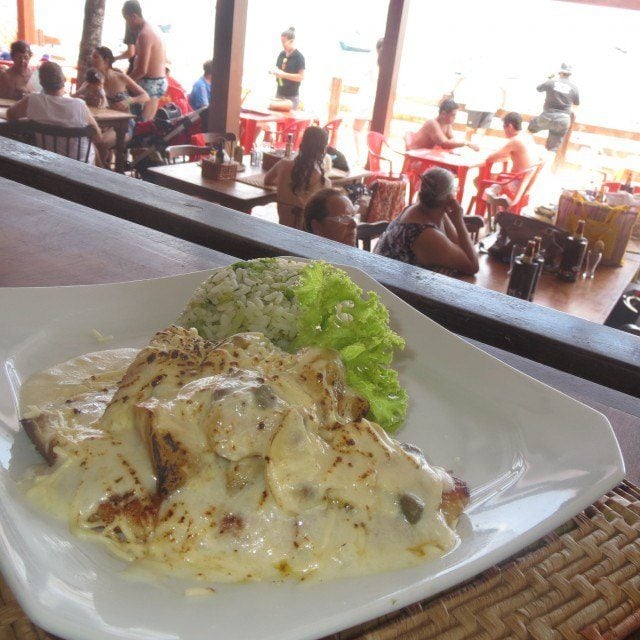 The tilapia at Peixe na Telha in Porto de Galinhas was one of the best meals on my trip.

That’s the Portuguese word for fish.

This choice ties into what I said during my budget story, about treating yourself. Find a place that makes this dish in a special way, and then devour it.

I did this in Porto de Galinhas, a place called Peixe na Telha, where I ordered the tilapia, topped with capers, mushrooms, and a garlic cream sauce.

I paid 40 reals ($16) and sat at a table overlooking one of the most beautiful beaches I have ever seen.

The restaurant also offered lockers to store your stuff, and the staff was nice enough to let me go to the special event room upstairs, so I could take a few photos of the aqua-blue water that looked smooth as glass from a distance.

Even without those courtesies and amenities, the dish was enough to make that a special dining experience. 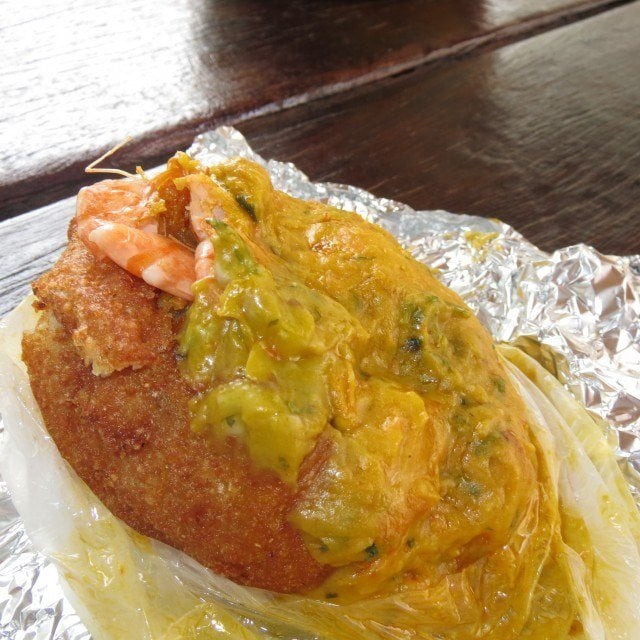 If you're buying street food in northeast Brazil, acarajé is your best option.

This is the king of street food in northeast Brazil.

The Brasileiros make dough from flour and black-eyed peas, then they deep-fry it until it’s the size of your fist.

They cut it open, fill it with boiled baby prawns, onions, green tomatoes, two types of paste and some decent hot sauce if you’re so inclined, and, yes ma’am, I am, please put a lot in there.

The best parts are, they sell it everywhere and you can find it as cheap as 2 reals, or around 80 cents. Eat two or three and you’re full.

Think of it as a good meal if you’re budget-conscious or in a hurry.

I’ve had this in the states before, but not with sushi, something else I touched on in the budget post.

I was in Recife and kept seeing signs while I was riding the bus, big posters promoting rodizio sushi and various restaurants.

I settled on a place called Galetus, which seemed to be one of those places that offer a variety of stuff, nothing really great but everything decent.

The sushi I ate had too much vinegar in the rice but was otherwise enjoyable.

I ate a plate of nigiri and sashimi, two hand rolls (one salmon skin, the other crab), and then two more pieces of nigiri, both with octopus, just to finish the meal.

It cost me 40 reals ($16), the same I would pay for all-you-can-eat sushi in the states, on the rare occasion I can find that offer.

I had a hard time walking afterward and took a nap as soon as I got back to the hostel. 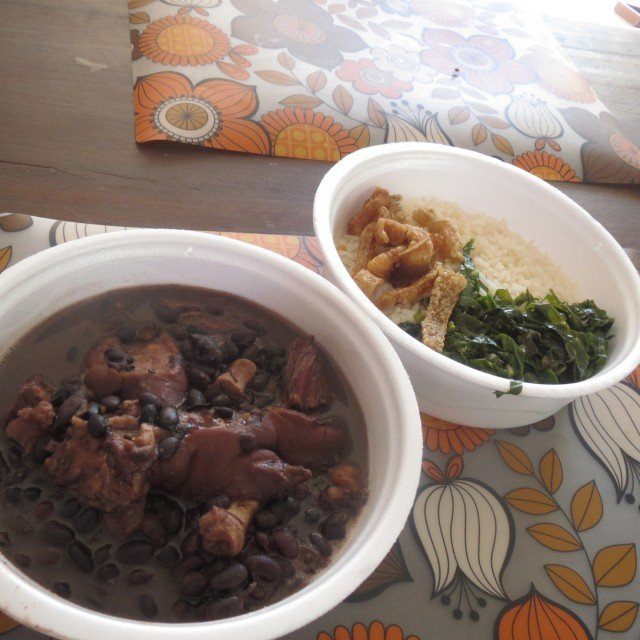 Eating feijoada is like eating southern comfort food in the United States: good and filling.

The friendly Brazilians I met in Maceió talked about feijoada a few times so I figured I better try it.

Lucky for me, in Recife, the restaurant next door to my hostel boasted that it is the best place for the dish in the city.

I went by for lunch one day and was surprised by how big the meal was and how fast they prepared it. I paid 20 reals (about $8).

I asked them to deliver it next door, and they were there shortly after I got settled in a seat in the hostel dining area.

The meal consists of two bowls, one with collard greens, rice and what appeared to be fried and breaded pork skin, another with black beans mixed with pork, bacon, sausage, and beef.

You can see the African influence in the meal.

It reminds me of something I’d eat in the southern United States, where, as any American knows, African culture came over by way of the slave trade, no different from in South America.

I ate a little less than half of my feijoada, as I was not hungry, then mixed the leftovers together in a pot to heat it up that night for dinner.

I tried cooking Brazilian dished with the help of chefs in Talk to Chef. They are very accommodating and everything was easy breezy.

Nice blog. I have been living in Brasil for 2 years and I eally liked the food. Although not always healthy (they love to fry everything and eat a lot of meat) but I enjoyed the variety of vegetables, fresh fruits, friendly people and weather. I lived in Florianopolis but visited the norther part too - Maceio :) I also tried Acaraje, balck beans and I liked them a lot. hehe

I must agree with u. the portions that are served in restaurants for 2 people are enough for 4 hehe :) Thanks Kris

Food looks really good.. Wish I can visit Brazil and try all those foods.. :)

The food all looks so good. I wonder how the feijoda differs from north and south.