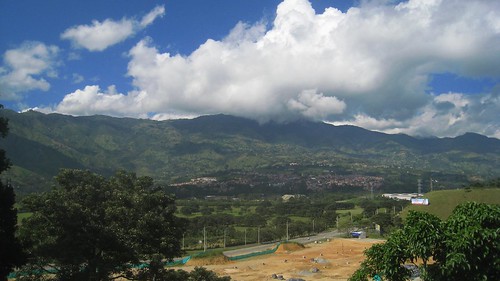 I was awoken way too early, around the hour of 7:30 am, by Max Blanco – slobbering canine friend.  Another smaller dog also made himself at home on my mattress, practically pushing me off of it.  Oh, the joys of living with dogs!

After awhile, I gave up on the idea of reclaiming my bed, and walked outside with my camera to capture the beautiful views while the sun was shining bright.  I can't say enough about how picturesque it felt.  While everyone else was still sleeping off the night's fun, I found my spot in a hammock on the porch.  It was an especially comfortable hammock, and allowed me to curl up and stretch without risk of falling out or feeling uncomfortable. 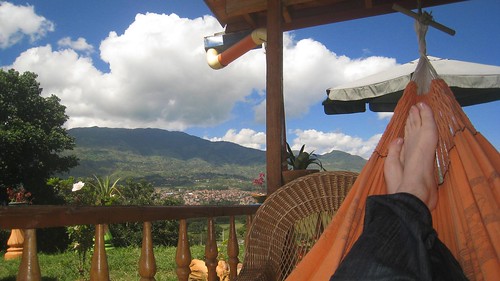 I used the time to reflect on my recent experiences, and take in the amazing view before me.  Hours passed and I remained perfectly content to spend the morning in this manner.  As the others arose slowly, the girls cooked up a typical lunch of chorizo and arepas (which were eaten with soft cheese and butter).  We finished off the rice from the night before as well. 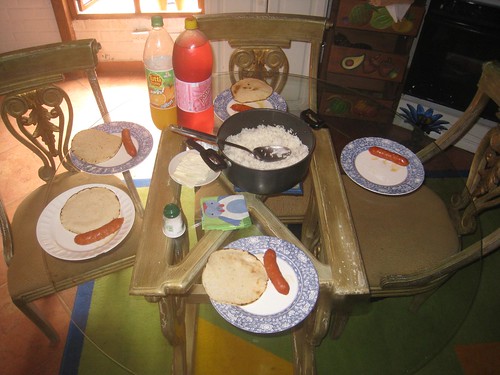 Lunch consumed, Lina suggested we play a traditional Colombian board game.  The board was in the shape of a poker table, and was made of stitched leather with horses adorning it.  The rules were kind of like backgammon in that the goal was to move your four pieces all the way around the circumference of the board.  Of course if you landed on another person's space, you sent it back to his/her starting point.  Once we got started, this rule would send people's pieces back left and right.  At one point, frustrated by having to continuously start over from square one, I proclaimed in Spanish that the game was impossible! 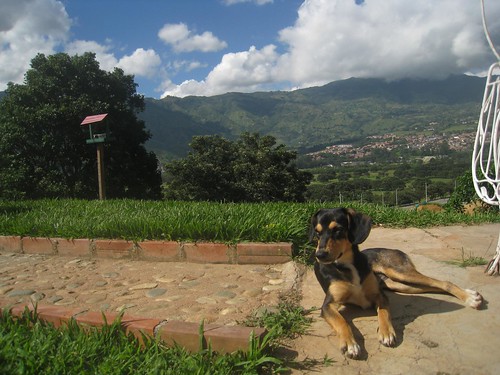 We played for an hour and a half or so, before giving up on finishing it properly.  The sun was still out, and the air was warm.  Fincas often feature pools, and while Lina had an above ground one, I was too tired to jump in.  Instead, I enjoyed the two dogs who were alternating between playing with each other and resting, the salsa music on the radio, and the hammock with a gorgeous view of the green mountains across the valley. 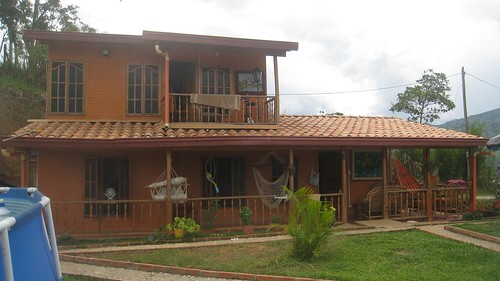 As 4 pm rolled around, we cleaned, packed up, and motored back to Medellin.

The longer I stay here, the less I want to leave.

Thanks - I expect it will be shots just like these which keep me motivated to travel again once I'm back to working a regular job.

Thanks - I expect it will be shots just like these which keep me motivated to travel again once I'm back to working a regular job.

Yes, I'll definitely have more contests in the future.