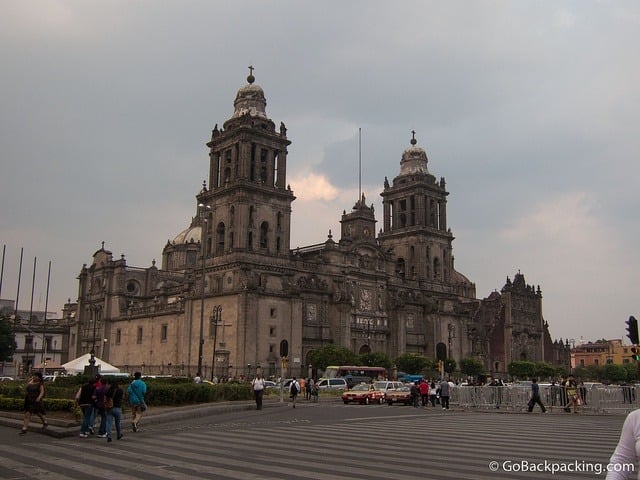 [O]n my first full day in Mexico City, I challenged myself to visit three UNESCO World Heritage Sites in a single day.

I began at the Central Campus of UNAM, and followed it up with a guided tour of Casa Luis Barragan.

At dusk, I completed the trifecta with a visit to Mexico City's Historic Center, which was both hurried and overwhelming.

The heat, air pollution, crowds, and grandeur of the neighborhood was enough to manage in itself, let alone trying to appreciate the points of interest.

I took a few pictures of the Cathedral, and hopped in a cab for the short ride back to my nearby hostel, thus saving me a twenty-minute walk.

As the drive began, I realized the meter was off, so I asked the driver about it.

He shrugged me off, saying it wasn't needed, which instantly set off alarm bells that this guy was positioning himself to overcharge me.

I tried to regain some control, asking for an estimate of the fare, but he shrugged me off again.

Too tired, or perhaps too complacent to push harder, I allowed the ride to come to its conclusion at my hostel, where he finally declared a value, 100 pesos ($7.80).

I responded angrily, knowing this was well above the actual rate.

He refused to budge.

In the heat of the moment, I lacked the confidence to argue any further, and handed him a 100-peso note (conveniently, he asked for a value that can be paid with a single bill), and entered the hostel.

Flustered from the exchange, I peppered the young receptionist with questions about the incident, to which she responded the ride should've been about 35 pesos ($2.75), or three times less than what I was asked to pay.

Expletives spewed out of my mouth as I trudged upstairs to my empty dorm room, where I continued to fume for another hour at the gall of the driver.

I opened up Go Backpacking's Facebook page and let off a rant involving cheating taxi drivers, and karma, which generated quite a few responses, including one girl telling me to “get over it” because it's just a few dollars.

She was right, of course, but it wasn't the money that bothered me, it was the driver's ability to lie to my face, and ultimately rip me off without hesitation.

I've taken hundreds of (metered) taxis in Medellin without a problem, and dozens more in Lima (unmetered) without being so blatantly overcharged.

The following day, I would take several, longer taxis covering large distances, and they barely tipped over the 100-peso mark, which hit home how obvious it was that the driver the day before had ripped me off.

But by then, I'd truly gotten over it.

What would you have done? Paid the asking price knowing it's too much? Given less, and left the car without apology?

Leave your thoughts in the Comments section below.

In the past 10 months of travel we've taken a taxi fewer than five times, and almost always at a pre-agreed price or sharing it with a local so we know we're getting the real deal.

Sucks that this one guy got you when you weren't on the ball as you normally would be, we had the same when we got $150 stolen whilst on a coach from Chiang Mai. We hadn't been travelling properly for a few weeks and we were far too casual, laid back and naive. Never should have happened.

I still like taxis, as long as they are metered.

Sorry to hear about the theft in Thailand.

It's happened to me many times, but usually I'm just so excited to be traveling that I really don't care at the end of the day.

That pretty much sucks, and is pretty much life! There are scammers everywhere and what can you do?! I agree, you've let it out in a rant and now move on from it. It happens everywhere! I used to travel for business a lot in Sydney. My colleagues would take a cab from the airport for each trip, and the cabbies would take extra long routes on occasion with a hefty price increase. They have you at their mercy, banking on the fact that you don't know where you are going. It sucks, but is life! At the end of the day, at least you are in a position to be taking a cab. Life isn't all that bad!

Good point Anita, in the end, it was only a few dollars.

At the time, I was still getting familiar with the currency exchange, so "100 pesos" sounded like a big figure, even though it's under $10.

I lived in Mexico for 8+ months (including 2 months in Mexico City) and never once got ripped off by anyone, including a taxi driver. That to me was one of the most pleasantly surprising things about Mexico, and a welcome change from places in eastern Europe and Asia. I didn't feel like people were trying to wring out every last dollar out of me that they could.

In Mexico City the taxis were all metered, but they weren't in most other places I visited in the country. My golden rule when there is no meter is to always agree on a price before I get in the cab. In your situation, I would have given a lesser amount. Bummer that it happened, though.

That makes me feel better, Tristan. I took a half dozen taxi rides in Mexico City, and this was the only one whose meter was off, and gave me any trouble.

Otherwise, they were all quite friendly, and happy to talk to me Spanish or English.

In Peru, because taxis are unmetered, you learn to negotiate before you get in, but when I know taxis have a meter, I usually get in without even looking to see if the meter is on.

Get out of the cab and walk away. Not sure of your level of Spanish, but if he spouts anything, tell him to call the police. I've done this on multiple occasions when they've tried to rip me off (especially in Eastern Europe when I was living in Sofia, Bulgaria) and without fail they always either lower their price or just write it off as a loss.

I had one cabi lock the door on me in Sofia when I refused to pay after I saw his meter was already up to $20 USD after 5 minutes into the ride and asked him to stop (when the previous ride of 45 minutes only cost 6 USD, the normal rate), and I promptly proceeded to slam my foot against the back passenger window, at which point he unlocked the door and screamed at me to get out.

But yeah...I've had cabis try to rip me off here in Cancun (rare; I speak reasonably fluent SPanish) and I always just start walking and tell them to call the police...9 times out of 10 they always reduce their price to the real rate, which I'm more than happy to pay. (25-35 pesos is all you should EVER pay in Mexico for distances less than 10 minutes).

Good tips TW. I'm conversationally fluent in Spanish, but tend to forget it all when I'm angry.

Someone else on Facebook suggested I just hand the guy a lesser amount, but the idea didn't occur to me at the time.

I also decided if it happened again, I'd have the taxi pull over and let me out, unless he agreed to turn on the meter immediately.