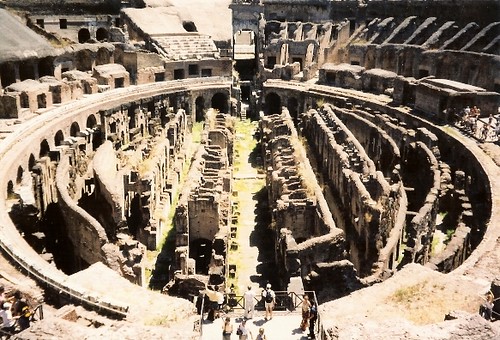 I met a whole bunch of friendly people last night from all over the world: Australia, Canada,England, Scotland, and Norway. The 18 year old Scottish guy was traveling with his skateboard, so I asked him about what that was like. One of the Norwegian girls was a nurse. One of the Canadians was an airplane technician/engineer. There was a beautiful girl from Canada reading Kafka's “The Basic,” and I couldn't take my eyes off her. I ended up getting a little too drunk by midnight. Instead of staying up and talking some more, I had to lie down and pass out. But you definitely meet more people traveling alone, and so far the freedom has been enjoyable. I still have to work out some things like finding and sitting with people who speak English on the trains. This means I should be waiting a little before I get on the trains. I talked with a girl from New Hampshire who was traveling alone. She seemed to endorse hitchhiking and sleeping out (train station, beach, park). She recommended seeing “Rent” in London. I just hope “Jesus Christ Superstar” is playing. After meeting so many people at the Ostello, I was kind of disappointed that I had to leave.

I started reading “On the Road” during the train ride to Rome. I love Kerouac's language, and the subject matter is a fine accompaniment to my trip. I've been thinking about how odd it was to travel with four other people. It definitely cannot compare to being alone. Even two people that get along are a completely different experience. On the road, alone, forces a person to write, read, survive, think, observe, and meet people. Without conversation, a person can get very lonely (like the girl from Mexico City had said about a friend of hers, two nights ago). I don't even bother with names during casual conversation. I'm getting annoyed with my cold; my ears get clogged in every train tunnel. I arrived in Rome on time, to the minute. I am definitely amazed at the promptness of the European trains. I went straight to my number one pension choice, and got a bed for 30,000 lire. I'll probably stay there the whole time I'm in Rome. It's a big city, and I'll be happy to get to quiet Venice in a few days. I'm at the Coliseum now. It must have been cool to watch man fight beast thousands of years ago. I can't even imagine how beautiful all the white marble that covered everything must have been. My first impression of the inside is how small it looked. Still an amazing engineering feat. 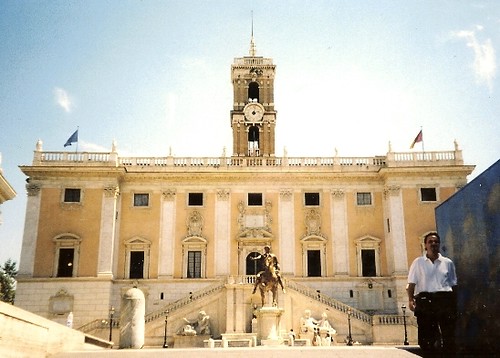 After the Coliseum, I wandered past the Roman Forum and ended up in the Campidoglio, which I recognized from one of my art classes. I also went into one of the two museums. The trapezoidal piazza was great to see from a balcony standpoint. From there, I wandered around the Pantheon. The inside was filled with complex marble designs which reminded me of the Medici chapel. I also saw Raphael's tomb there. The dome, with its nine meter circular skylight at the acme, was an amazing visual effect. The coffers were designed to do just that. I snapped a picture of a white bird encircling the inside of the dome.

On the way back to the hostel, I got lost. By then, I was tired and hot. Next time, I'm going to avoid the scenic (don't know where I am) route. I ate two triangular ham and cheese sandwiches. The white bread appeared to have had the crust (edges) pulled off. Tomorrow I'm going to hit the Vatican, and then I'll probably leave Sunday morning for Venice. The traffic patterns and rules here are scary. There are very few traffic lights. Mostly, you have to cross the street at the painted crosswalks. To avoid destruction at some of the big crossings, I began to wait and cross with other people. But, the mopeds are still crazy and numerous and annoying. My toothache came back today. I hope it is nothing serious. Also, I think the no underwear thing is starting to cause an itchy/irritation around my upper thigh area. The only bad part about pensions and hotels is the lack of a common room. This makes meeting other people a little more difficult. Plus, there is no alcohol allowed. 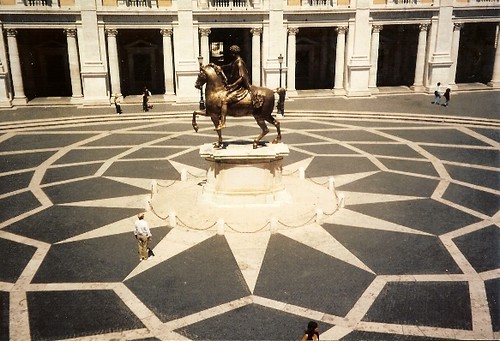 My room ended up being filled by nightfall. I continued to read “On the Road” while everyone returned to the room. Above me was a beautiful brunette from NYC. To my right was a beautiful blonde from New Zealand, and there was a girl from Australia. The other four beds were filled by two couples. One didn't speak English, and the other seemed to have a strained and boring relationship. The boring couple went to bed kind of early (10 PM). I slept by the window, periodically turning to see the crescent moon over Rome.

I usually execnipree the best flight deal on Southwest. I also usually book rooms directly through the resorts website. I have been noticing deals through reward credit cards and frequent flier programs. You should sign up for email specials at the major Vegas resort companies like MGM and Harrahs.