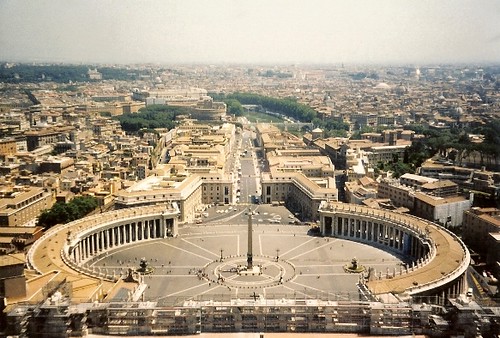 Today I woke up early in order to get to the Vatican before any lines formed. Well, there ended up being no wait at either the church or the museums. The walk across Rome to the Vatican City only took about 50 minutes. The piazza and colonnade seemed much smaller than I had thought, after seeing so many pictures. The longer I walked around it, though, the bigger it seemed. The church didn't seem too impressive from the outside, maybe because the entire front facade was under scaffolding. Once inside, however, the magnitude of the art and architecture became obvious. The floor designs in marble, the size of the statues and the Baldaccino, and ceiling mosaics were indescribable. I couldn't even take a picture for it would be impossible to capture the experience. The rays of light that came through the glass were very spiritual. Michelangelo's “Pieta” was beautiful, so delicate (behind the bullet proof glass). I paid the money to see the Treasury. I also went to the cupola. The view did not compare to that of the Duomo's in Florence.

I'm sitting along the colonnade right now. Just a few minutes ago a damn pigeon shit on me. Luckily there was a toilette ten meters away. The Vatican Museums were most impressive. There wall and ceilings in the Geography room were cool. Raphael's room had scaffolding on one side, covering up 1/3 of the “School of Athens.” That was kind of disappointing. The Sistine Chapel was quite crowded. Once again, I didn't think pictures could capture the beauty and color of the newly restored paintings. There were plenty of people taking flash pictures despite the constant warnings not to. I found this renegade attitude to be careless (then again I might be coming off as a hypocrite or elitist). Do they know the flashes contribute to the deterioration of frescoes? 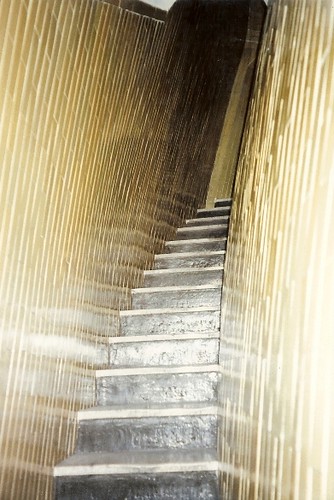 I'm probably going to stay in Rome for a second full day, especially since my roomies are friendly and cute. Too bad I chickened out and did not ask to go to the Vatican with the two girls that I knew had the exact same plans as I did (I just had to be anal about getting there early). I'm starting to get concerned about my illness. I've been seeing blood in my mucous, which has remained a dark yellow. I haven't gone to a doctor because I don't seem to have a fever or other threatening symptoms. Rome is tiring and I'll probably stay in again tonight. I went to the supermarket where I bought two comfortable pairs of Italian boxers and a 1.5 liter bottle of water for about twenty five cents. Obviously, that is the best deal around. I also went to the Castile de'Saint Angelo. I've got quite a sunburn on my face. I plan to sleep in tomorrow and then go see a few sights. Then, on to Venice Monday morning or maybe Verona. I messed up on paying for my bed tonight, and was lucky to retain my bed for the night. This was the first week I was on budget ($50 per day). I think from now on, I'll be under budget.

I've decided to get of Rome after only two nights. My New Zealand girl is leaving, and I saw most of what I came to see, plus the city is too big. Back to Venice for two or three nights, then Nice, Barcelona, Ireland, England, Paris and hopefully Amsterdam and Copenhagen. I loved the way (Ms. New Zealand, since I never learned her name) she said “Kerouac,” it must have been her kiwi flavored accent that won me over. She had an incredible lightness about her. I just couldn't spend another night in Rome without the promise of her smile.

It turned out that I had dinner with about fifteen new arrivals in the pension. We went to San Paulo Restaurante where someone who had arrived earlier cut a deal: no 15% service charge, 1 pasta dish or pizza (no fish) and one beer, wine, or soda plus bread. As I sat there for two hours listening to two conversations at once, I thought about how much nicer the picnic at the Trevi Fountain would have been that night (with the Aussie and Kiwi). Damnit, that girl was great. The dinner group went to an Irish pub a few blocks away around 12:30 AM. There, I spent $5 on a pint of Guinness that wasn't even poured right (the bartenders didn't let the beer settle). I found this quite ironic (and not as tasty) considering all the Guinness propaganda hanging on the walls.

Before we had all broken up for dinner, we (my angel, the girl from New Zealand, and her sightseeing buddy, a blonde Australian girl) were all exchanging our feelings/amazement at St. Peter's size and grandeur. There was such excitement in the words during those few minutes. Sharing experiences such as that with someone feels like such a release and special too. I met a lot of character types that night: the goofy Americans, the vegetarian who didn't eat her dinner cause there was meat in her meal, the frat-like French Canadian dude with all the stories, and the Argentinean girl who barely spoke English. I'm never going to forget my girl from New Zealand though. I should have gone to Greece with her the next day.

Hello, nice to come to your blog!