This morning we woke up early to avoid any lines at the Duomo. We ended up getting there around 10:30 AM, and waiting in line anyway. Eric, Sam, and Dave had to wait at the train station to reserve a spot on the train to Barcelona which ended up being full or too expensive anyway. So they're going to Nice at midnight. Meanwhile, I booked two nights at the Ostello Archi Rossi for 70,000 lire. The inside of the Duomo is not as spectacular as the outside. Dave and I went into the crypt, but it wasn't that interesting. We also climbed up 463 steps to Brunelleschi's cupola. The climb wasn't nearly as dark and tedious as the one in Prague. The view was beautiful, as was the architecture of the cupola itself. The view was definitely worth the cost. I don't know why Sam and Eric weren't willing to pay the 10,000 lire ($4).

I bought an erasable pen today. Hopefully, I'll be able to extend each Eurorail day by two to three times. Since I decided to skip Greece, I should be in good Eurorail shape. After Florence, it is on to Rome for three nights, then Venice for two to three nights. That will put me in Italy for two weeks. I think it will be a lot easier for me to do things by myself. And, once I get into a comfortable groove, the trip will go much smoother. The downfall, however will be a lack of company, and increased security concerns. I am planning/hoping to meet more people though. And if I can do that at hostels, I might pick up someone to travel with and/or go out with at night. Either way, I'm looking forward to sitting outside in the afternoons, watching/listening to the city around me. That is what I'm doing right now at the Duomo.

We split up for a couple of hours, and I went back to the Ostello Archi Rossi for an hour. There I met an Italian student who I talked to for awhile (later I find out that he had probably been high during our conversation which explains his craziness). The language barrier was there, but he knew English well, and I nodded a lot. It was cool that he mentioned Pennywise, NOFX, Bad Religion and Fugazi when I said I liked punk music. He reminded me (physically) of a friend of mine from college. I also went to the Palazzo Vecchio. It was a bit expensive for what I saw. Once again, there were a few giant rooms with amazing ceiling paintings and gilded frames. There was a sculpture by Donatello in bronze, “Judith and Holofernes.” There was also a cute sculpture of a “Putti with Dolphin.” I've grown to love the putti (angels). Therefore, I've begun photographing the ones I like.

We got back together and ate a bad dinner at a self serve place. Then I returned to the hostel where I met two more of my roomies, and started a load of laundry. My aim is to resurrect my stinky socks. I said good bye to Sam, Eric, and Dave. I'll survive, and have fun, but I'll miss them (double-edged sword). I am looking forward to the freedom. 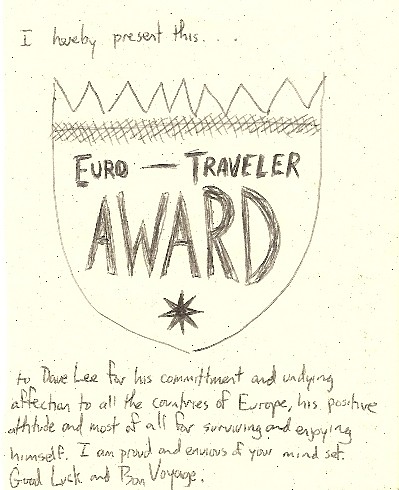 Beautifully written post from Italy. It is always facinating to get an account of travels from the non-touisty jouneyman. Happy Travels and stay save.

Beautifully written post from Italy. It is always facinating to get an account of travels from the non-touisty jouneyman. Happy Travels and stay save.