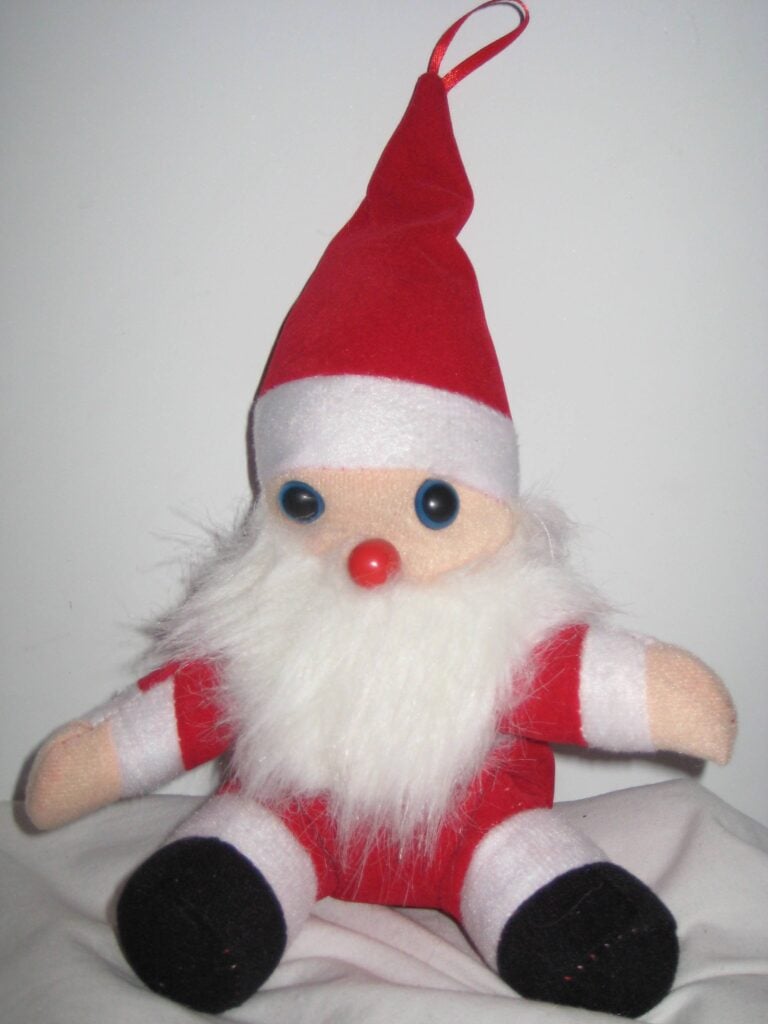 The Santa stuffed animal given to me by a friendly high school student who didn't quite understand why Santa doesn't visit the Jews...

I'm not usually one to broadcast my religion as I travel, but around Christmas time, as people continuously asked me how I celebrate the holiday, I began to tell them I was Jewish.

To date, every single person to whom I have told I am Jewish has responded with the same thing: ” You're so smart!”? Um, thanks? You've probably never met a Jew before, where is that stereotype coming from?

Well, it turns out that in this town, it's coming from the geography class where the students are taught that Ashkenazi Jews have the highest IQs of any minzu, or ethnic group. While that doesn't explain where the stereotype comes from in other cities, I have to assume it's similar.

Sometimes reactions have also involved follow-ups. Most of the time, it's simply that we're really good at business. Ok, that stereotype is worldwide, I get where that came from. Others have been less founded in reality, or more hilarious.

A coworker, for example, once petted my arm for awhile and asked me to teach her. She didn't specify what I should teach her, but seemed to hope that any teaching coming from my minzu would be particularly awesome.

One person, upon hearing that I was Jewish, paused, squinted at me, and then said, ” Well, why aren't you black?”? The person next to her then told her she was an idiot, Jews aren't black, so that probably isn't a commonly held misconception, but it does highlight that these stereotypes are based not on actually having met any Jews.

And, perhaps my favorite moment came when I actually asked why people think Jews are so smart. We were near computers, so this friend typed into BaiDu, the most popular search Engine in China, ” Which ethnic group is smartest?”?– top hit? Jews. Nice. If the internet confirms it, it must be true.

As I mentioned, this came up most around Christmas, as people really couldn't figure out why I don't celebrate the holiday. People usually looked perplexed and then asked, ” Why don't you have a New Year?”?– turns out there's a common misconception that because Christmas is the biggest holiday in the US, that it's also our New Year, similar to the Chinese New Year. It took me awhile, but I finally figured out the confusion.

At least in this town, not a single person knew that Christmas was related to the birth of Christ. Old Man Christmas (the literal translation for Santa Clause in Chinese) was known, presents were known, and many in this town even ” celebrated”? Christmas (giving gifts and eating a lot), but no one knew about the religious aspects. It's funny what we export, eh?

Once I set some folks straight, I told them my own Christmas tradition involved eating Chinese food. Now that was well-received, and many joined in my festivities.

Jews have made contributions in a broad range of human endeavors, including the sciences, arts, politics, and business.[183][184] Although Jews comprise only 0.2% of the world's population, over 20%[184][185] of Nobel Prize laureates have been Jewish, with multiple winners in each field.

Shalev, Baruch (2005). 100 Years of Nobel Prizes. p. 57. "A striking fact... is the high number of Laureates of the Jewish faith—over 20% of the total Nobel Prizes (138); including: 17% in Chemistry, 26% in Medicine and Physics, 40% in Economics and 11% in Peace and Literature each. These numbers are especially startling in light of the fact that only some 14 million people (0.2% of the world's population) are Jewish." Dobbs, Stephen Mark (October 12, 2001). "As the Nobel Prize marks centennial, Jews constitute 1/5 of laureates". j.. Retrieved April 3, 2012. "Throughout the 20th century, Jews, more so than any other minority, ethnic or cultural group, have been recipients of the Nobel Prize -- perhaps the most distinguished award for human endeavor in the six fields for which it is given. Remarkably, Jews constitute almost one-fifth of all Nobel laureates. This, in a world in which Jews number just a fraction of 1 percent of the population." "Jewish Nobel Prize Winners". Retrieved 25 November 2011. Ted Falcon, David Blatner (2001). "28". Judaism for dummies. John Wiley & Sons. "Similarly, because Jews make up less than a quarter of one percent of the world's population, it's surprising that over 20 percent of Nobel prizes have been awarded to Jews or people of Jewish descent." Lawrence E. Harrison (2008). The Central Liberal Truth: How Politics Can Change a Culture and Save It. Oxford University Press. p. 102. "That achievement is symbolized by the fact that 15 to 20 percent of Nobel Prizes have been won by Jews, who represent two tenths of one percent of the world's population." Jonathan B. Krasner, Jonathan D. Sarna (2006). The History of the Jewish People: Ancient Israel to 1880's America. Behrman House, Inc.. p. 1. "These accomplishments account for 20 percent of the Nobel Prizes awarded since 1901. What a feat for a people who make up only .2 percent of the world's population!"

"At least in this town, not a single person knew that Christmas was related to the birth of Christ.... It's funny what we export, eh?"

What's even funnier is that we don't even know ourselves why we celebrate Christmas. A survey in 2008 revealed that less than three quarters of the kids in Britain know that Christmas is celebrated to mark the birth of Jesus Christ.Some of them believed it was 'because Santa Claus was born on December 25th...

"At least in this town, not a single person knew that Christmas was related to the birth of Christ.... It's funny what we export, eh?"

What's even funnier is that we don't even know ourselves why we celebrate Christmas. A survey in 2008 revealed that less than three quarters of the kids in Britain know that Christmas is celebrated to mark the birth of Jesus Christ.Some of them believed it was 'because Santa Claus was born on December 25th...

I remember when Christmas was first becoming known in Japan when I was a kid, my family at first was the only people around who gave and received presents. Then it evolved into representing a romantic night for couples, akin to Valentines. I guess since New Years is for families and tradition they really didn't need the whole holiday imported, just the pretty parts. Now you'll see a lot of images of young couples watching the lights of the Tokyo tower in romantic snow flurry as the "Christmas" image. Go figure!