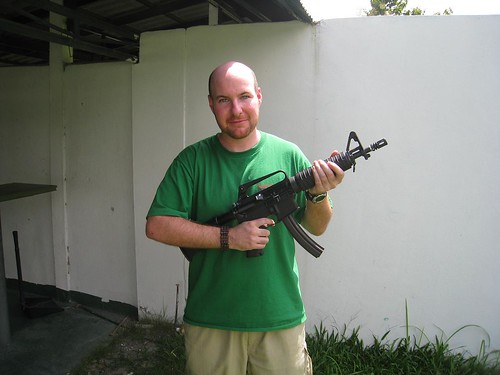 After the tigers got my adrenaline pumping, I took the tuktuk driver up on a suggested stop at the local shooting range. He mentioned they have machine guns, and I couldn't resist. I know Cambodia is (or use to be) the popular place to fire a few rounds from an AK-47, but I wasn't in the mood to fire automatic weapons during my time there.

Thailand, on the other hand, is all about having fun. 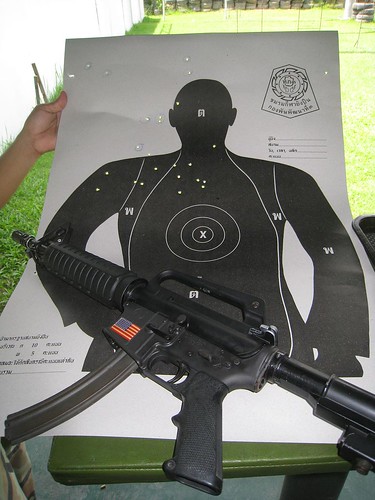 I walked into the small office and checked out the weaponry on hand. Pistols, a rifle, and a few shotguns. I held the pump-action shotgun, but I didn't think I was ready for it yet. I walked out since they didn't seem to have what I wanted.

A minute or two later, a plump 12-year old Thai kid (whose role at the range was anyone's guess) came to the door with a modified M-16 and asked if it interested me. Now we're talking, I thought. He also showed me a modified 9mm with a longer barrel and laser scope. Holding the pistol and pointing the little red laser, I was reminded of how cool Arnold was in the original Terminator. 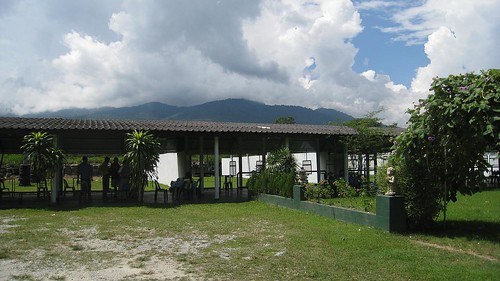 Ultimately, it was the machine gun I wanted to experience, so I bought 25 rounds and fired them off in two separate spurts. The instructor told me the ammo was just a tad smaller in caliber than an M-16 round (.22 vs .223 caliber), and with a smaller shell casing. I did not ask why the rifle had been modified, though I suspected it had to do with the cost of ammunition (any gun aficionados out there care to chime in?).

Pow, pow, pow. The gun felt easier to fire than the 9mm I tried back on Phuket, and with less kickback. Unfortunately, I ran out of rounds before I got to try the automatic setting.

Thats a great article I will use it in our site

hi dave my name is dave ,did you shoot in vanuatu if so where in vanuatu

hi dave my name is dave ,did you shoot in vanuatu if so where in vanuatu

Thanks Ryan. I don't remember the exact cost of the gun ranges in Thailand, and can't say if they'd be cheaper than in the USA because I've never been in the US. But, since everything else is cheaper in SE Asia, I bet you'd find the prices to your liking.

Of course if you're trying to fire automatic weapons, the cost of ammo could go up quick. Definitely backpacker-friendly rates.

Hi, great blog! Tons of very useful information. I'm interested in finding out how much you spent at the gun range. Were the prices pretty reasonable?