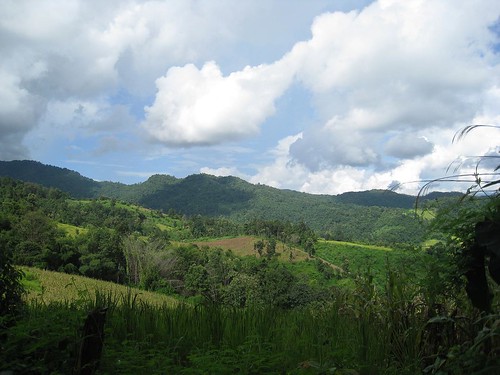 Chiang Mai is plastered with advertisements for treks in the surrounding area, especially north and west of the city. Like tubing in Vang Vieng, and visiting the Killing Fields in Cambodia, trekking in northern Thailand is on most backpackers' itinerary for Southeast Asia.

Expecting the quality and prices of all the 3-day treks to be similar, I booked my trip through one of the first travel agents I came across a few days earlier. In another case of spending money unnecessarily, I bought a pair of knock-off Teva sandals at the Sunday market thinking I could then leave my sneakers and flip flops behind. To save you the suspense, they only served to quickly cut my two littlest toes as they weren't properly broken in.

I was picked up in a pick-up that already held a Spanish (technically Catalonian I would learn) couple, Xavier and Monse (pronounced “moan-say”). We also added two Japanese women to the mix, however their English was very limited and they had only signed up for the 2-day trek. 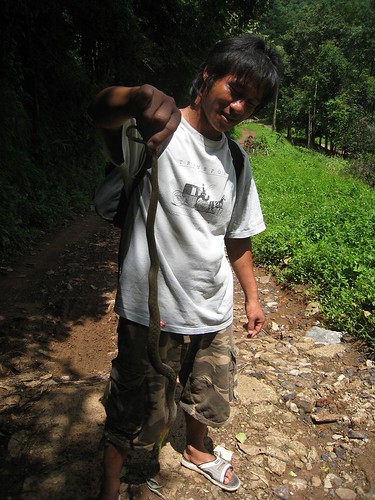 We stopped (like everyone else starting their trek that morning) at a butterfly/orchid garden outside of town. And then it was off to the countryside where before we even began walking, it was time to sit down and eat a lunch of fried rice with chicken. Our guide reclined restfully, which would become a trend.

Lunch devoured, we strapped on our daypacks and headed off. I spotted our one and only snake while we were still in view of the lunch spot. Unfortunately, it had been squashed dead by a motorbike.  We passed all sorts of locally grown crops such as bananas, coffee, and avocados. 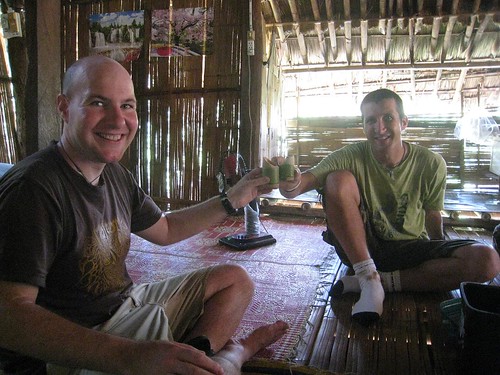 We walked a total of 3 hours to reach the Karen tribe village, however we had 1.5 hours worth of breaks along the way. Xavier, Monse, and I all began to get frustrated with the slow pace. The Spanish couple were also on a trip around the world, already having trekked to Machu Picchu in Peru, climbed a 6,000 meter peak in Bolivia, and most recently done a short village trek in Burma. More on them later! 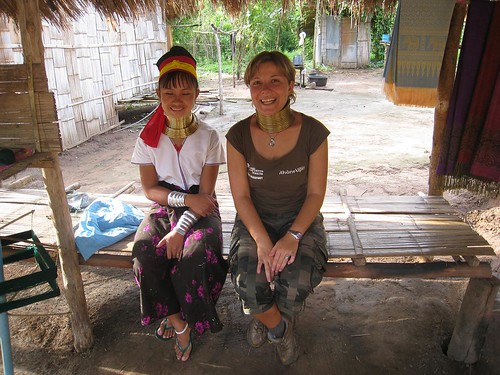 Once we reached the village, I was surprised at how small it was. It was Xavier, not our guide, who pointed out that the Karen people are persecuted in Burma, and thus seek refugee status in Thailand. They are allowed to own livestock and earn money from tourism, though not grow crops. The women are known for their long necks. 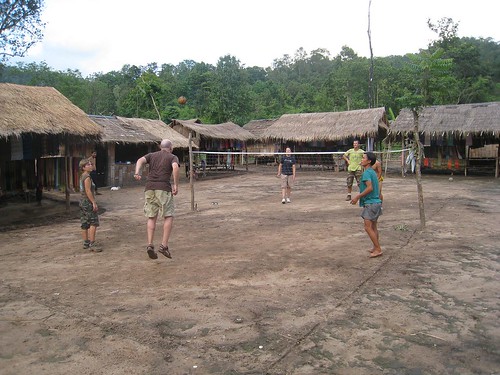 It was also Xavier who pointed out the net game akin to volleyball though played without hands is popular in Burma, though I'd seen it being played all over Southeast Asia. We all took turns knocking the ball around with the guide and a few of the guys in the village.

In one instance, I kicked my left leg up and out (muay thai style), only to have my right foot slip completely out from under me. I was horizontal for a brief moment before I came crashing down on my right forearm and hip. It might have been less embarrassing if it hadn't just been me and the guide playing with everyone else watching! 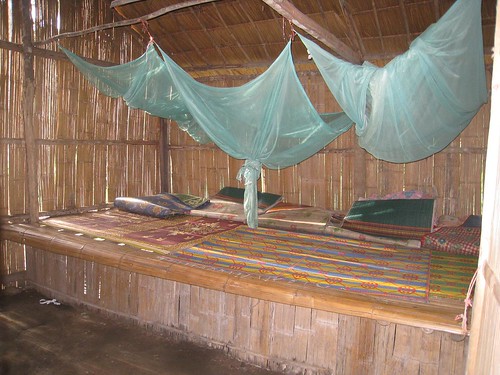 Our accommodations in the village were basic (which is the point, of course). We were surprised to find a few cold water showers existed, while the toilets were squat style. Another group of trekkers arrived and set up in a bigger structure. Dinner was served by candlelight, and once I started to find bits of chicken bone in the curry, I lost my desire to eat in the relative dark. After the meal, most people sat around the campfire talking for a period of time, though in anticlimactic fashion, everyone was in bed by the early hour of 9pm.

I recommend Chai Lai Sisters. I went on a trek in Dec and thought the quality of our guide was very good. We went to a beautiful and remote Karen village w/ a private waterfall. As it's the local village, you get to meet all the brothers, sisters, aunts and uncles of your guide! There were 4 retired elephants and we got to walk with them through the jungle. Accommodations are clean but bare (as expected) and the pace is a really nice way to relax and enjoy the mountains. It's a little bit of a trek outside of Chiang Mai (plus there are windy curves!) but once you see the view, it's worth it. Also, It's an ethical tour - these women are graduates of a job training program and trying to start their own business. http://www.chailaisisters.com/

Hi ;-) Do you by any chance remember the name of the agency where you booked the trip? It sounds really great.Thanks!- L

Hey Dave! Are my comments getting spammed? I think that the new website structure our company has is causing Askemet to catch them.

Despite the Teva knock-offs cutting your feet it looks like they gave you a lot of bounce in that picture! Kudos to whoever caught you way up in the air like that. -Suz