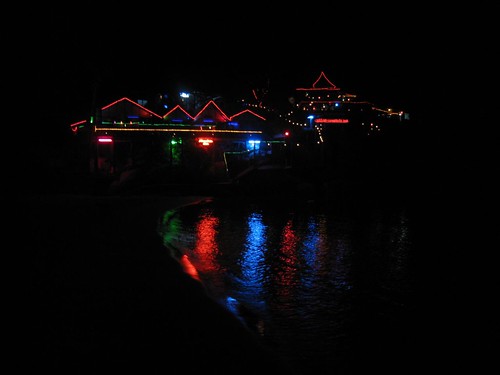 Steve arrived just in time to join me for the July 2008 Full Moon Party on Kho Phagnan's Haad Rin Beach.

I was beyond happy to spot him slugging his way through the sand at 5pm after an overnight bus ride from Bangkok.

I greeted him with good news too. I had paid for a bungalow that had opened up that morning so he'd have his own place.

As he settled into his new pad, I used the time to try and freshen up.

Having awoken at noon, I was still trying to shake off my hangover from the prior night, concerned I had peaked too soon with the partying.

No one told me every night is party night on Haad Rin, and it's a hard place to exercise restraint. 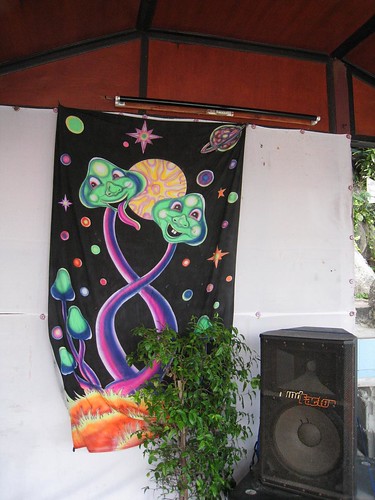 We met at the Mountain Bar for a beer. I was humored by the culture shock Steve was in the midst of experiencing.

Unlike me, he barely spent a day in Bangkok before heading straight to party island Kho Phangan.

Where were the cows? It's so clean! Why are the women all barely dressed!? I could relate to it all. 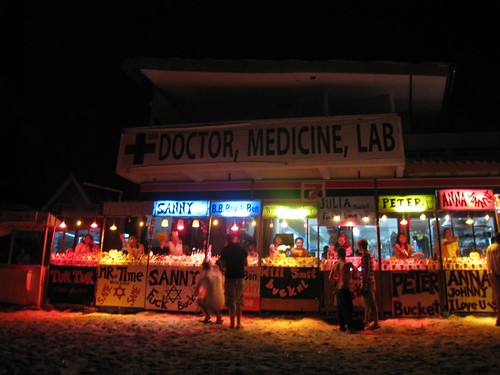 Food vendors set up stalls along the beach's perimeter in anticipation of the hungry, drunken hordes.

The bucket (liquor) vendors lit up and music began to boom from a few of the clubs.

Workers were still erecting the dance platform in front of Tommy Resort.

Following our stomachs, we went down to the beach and found ourselves ducking into The Cactus Bar when it started to rain.

Beneath the black lights, people were applying fluorescent paints on one and other.

Steve found it hilarious that a guy was painting abs on another guy.

He couldn't get over the vanity involved in such an act! I, on the other hand, was contemplating flames on my freshly shaven head.

Once the rain let up, we headed up the street in search of dinner. I had written off The Family Guy years ago after it first came out, however Steve was a fan so we ate in that restaurant.

After less than an episode, I was a convert. I vastly underestimated the mature (in a sophomoric kind of way) humor of the show.

We drank delicious coconut shakes, entranced by the cartoon, as party people continued to stream toward the beach on the street behind us.

Despite the continued rain, we left the shelter of the restaurant behind and braved the beach. 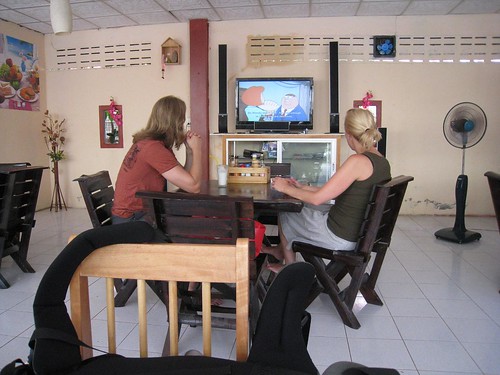 It was crowded…much more crowded than the prior night. Ferries were adrift offshore while people were being dropped off by the speedboat load.

The serene beach I arrived at by day had become the epicenter of Thailand's biggest party of the month.

Large lightning bolts flashed across the sky over the water, and judging by the masses, most people were unaffected by the rain. It was a bit chilly, however Steve and I were all too happy to take in the sights of a platform filled with dancing girls.

One in particular, clearly in search of attention (she was wearing quite a bathing suit), climbed to a very small, higher (say 15-foot) section.

There was just enough room for her, and she didn't last long before losing her balance and toppling over.

We stood there in the rain, aghast at this woman's violent fall from grace. Images of compound fractures filled my mind, while Steve figured someone should be told.

We turned around after a minute or two to see the girl (seemingly OK) by the road.

We moved on…somewhere. At this point, it may have been a pit stop back at the bungalows followed by another drink at The Mountain Bar.

Back on the beach, we ran into a couple Steve met in Nepal or India.

We joined forces and danced to some house music at the south end of the beach.

As usual, guys were using the shoreline as their personal urinals, though in a new twist on previous nights, women could be seen doing the same.

The gross truth is that by the time people are using the water as a toilet, people are also swimming and playing around in all too close a proximity. 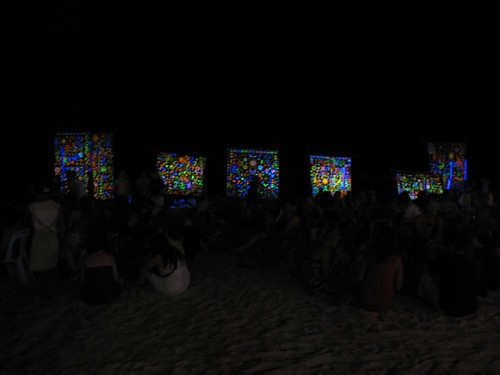 Around 3 am, Steve was all but ready to head back to his bungalow for sleep.

We parted ways and I went back to the house music on the south end of the beach. I ended up dancing with an Irish girl in front of a big stack of speakers for an hour or so.

Despite the blaring music, we were able to talk a bit.

Meanwhile, Steve was witnessing a couple having sex on the beach, and an English guy beating up 3 other guys by making use of some Muay Thai boxing techniques.

As the Irish girl had to remain stationary so her friend could find her, and they could depart the island by boat at 7 am, I ventured up the beach to find a spot to watch the sunrise.

I rolled up to the drum ‘n bass area and the music was booming. I loved the feeling that the music's energy could drive me into the gulf.

It was exactly how I wanted to feel at a dance club when I arrived in Bangkok.

I grabbed a seat and peered out over the water, occasionally taking in the sights of drunk people passed out (often face down) in the sand, and people going for swims. 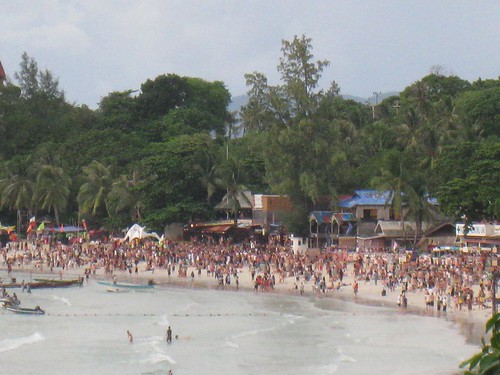 I started talking to a Dutch girl who was much more lively at this early hour than her friend who was clearly in need of sleep.

The sun rose over the horizon, lighting up the hundreds, if not thousands of people, still dancing and mingling on the beach.

Sometime around 7 am, I waded through the water, took a quick shower, and amazingly drifted off to sleep despite the still-blaring trance music which always seemed to overpower all other noise.

Earlier in the week, I realized that if the party was begun by a bunch of drug-friendly ravers/backpackers/hippies back in the 90's, then its popularity combined with stricter Thai drug policy has long since morphed it into an alcohol-fueled Spring Break for an international contingent of 18-25-year-olds. That said, I found the overall vibe friendliest on Full Moon night.

Maybe it was all the compliments I received for those fluorescent flames on my head.

Hey Philip, yea the Full Moon Parties are still a big draw around all of SE Asia. There's always a new class of graduates from around the world ready to hit the road and party on a beach.

Wow - it's still going down, huh?Seems like it hasn't changed much either. The days before the Full Moon Party seem to be the craziest really. By the time the full moon comes around, you've usually already partied your head off, and it makes the day of a bit of a crazy trance. I went once on a boat from Koh Tao, arrived in the evening and went back on the boat in the morning -- that made for a really different kinda experience.

Glad you enjoyed it!

Shall we blame the absence of a picture of your flaming head on your drunken stupor?

nope, just a desire not to break my camera.

I read your "review" on the full moon party...

I'm planning to get down there this OCT.

did u stay in Koh Samui then travel to Koh Phangan for the party?

If yes, which hotel did u booked? thanks!

I spent a week on Koh Samui's Chaweng Beach, and then traveled to Koh Phangan a week before the party so I could ensure I got a bungalow/room. It turns out that was plenty of lead time, at least for this time of year. A few days before the party though, most places in Haad Rin were booked.

I didn't book a hotel on either island, I just showed up and found a bungalow that fit my price range. If you want to have more control over where you stay, such as at the seemingly popular Tommy Resort, then you may want to book ahead.