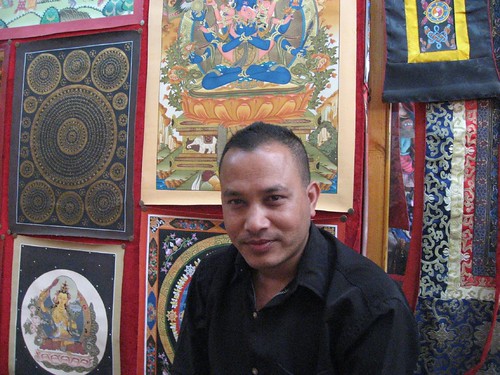 Upon my return to Kathmandu, I dedicated a full day to thangka shopping. Thangkas are traditional Tibetan Buddhist paintings made on cloth. They are often framed with a brocade and depict one of five different topics: Deities (like Buddha, Tara, etc.), Life of Buddha, Wheel of Life, and two types of Mandalas. I've wanted one for years, however at the one Himalayan store in Washington, DC I found, they were around $500. The selection was also quite limited.

Thangka shops and schools are as numerous in Kathmandu as fake t-shirt shops are in Bali. If I had any hope of making a decision by day's end, I needed to narrow the field by picking a subject. I went with the Wheel of Life which depicts the psychological states associated with an unenlightened mind. All thangkas are steeped in religious symbolism and while I learned quite a bit during my shopping experience about the iconography, I'm not even going to attempt to explain it.

After looking at enough thangkas, you learn what to look for when determining quality and value (even before you ask the price). The fineness of lines, harmony of colors, and use of 24k gold are big differentiators. In general, the student quality is the lowest, followed by a middle ground, and lastly the “master” quality. Once I found the finest quality thangka of the day, I could hardly bear to look at the lesser ones in other shops (even if they were cheaper).

So I negotiated a 30% discount, and still spent almost three times the initial figure I had in my head. Money seemed to matter a little less when I reflected on my opportunity to own a piece of art so beautiful, let alone the three months it took to create it. I chose the color and design of the brocading and picked it up a few days later. I only had a quick glimpse of the framed painting before it was rolled up and packed in a large cardboard cylinder for shipment home.

The post of content is very interesting and exciting. I learned a lot from here.The content from simple to complex, so all of you can come in . No matter you want to see what can be found.By the way ,there are some websites is also very wonderful,you can go and see.such as air jordan 16.5

Good job haggling... I'm always so horrible at that, they see me coming from a mile away.

Good job haggling... I'm always so horrible at that, they see me coming from a mile away.

I am glad to hear your found the painting you were looking for and that you haggled the price. So often people tell me about how they paid full price without negotiating.

Good buy dave so what if it cost a little more at least you know it authentic not a china knock off!