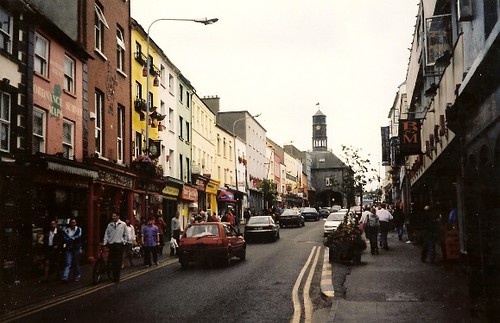 I woke up this morning with a plan, check out and grab a train to Kilkenny. I hadn't looked at the train schedule, so I went at it blindly. I made the train about five minutes before it left. They didn't even stamp my Eurorail pass. This means lots of train travel (for me) in Ireland.

I ended up taking a very out of the way route to the hostel in Kilkenny, but I got a bed. I arrived during their annual Arts Festival. Though I wasn't interested in going to any of the exhibitions, there was probably an increased sense of energy among the people. The train ride was short, with beautiful scenery of farms, mountains, sheep, and cattle. So, Kilkenny is a pretty small town. It is really beautiful. The big flower pots along the street had at least ten different kinds of flowers in each of them. Very colorful. And all the storefronts were clean with new paint. I decided to leave the sights for tomorrow, and went for a beer.

The Pumphouse seemed like a college bar (with better beer). Though it was only 3 PM, it was quite crowded (all young people). I didn't really like it, too loud, or maybe because I didn't have anyone to talk to. Poster of Kurt Cobain on the wall. I left, crossed the street to my hostel, and took a nap. I rose to find some entertainment. I went to a bar that was having a trad session in an hour. I sat there thinking about how this quiet place is going to hold a bunch of fun soon. Left at 9:30 PM when after only one musician arrived, and the music looked far off. Went to a big bar called Matt the Millers. There, the Bottle Brothers began playing once I entered. They opened with Tom Petty, and hit several Eagles and about ten Simon and Garfunkel tunes. I requested the Byrds, but they didn't know them, then Bob Dylan. I didn't stick around to hear if they played my request. Took a short walk to the Pumphouse. The guy there recognized me from earlier (Carlsberg), and thought I had left without paying. It turns out that I had actually paid one of the other bartenders. 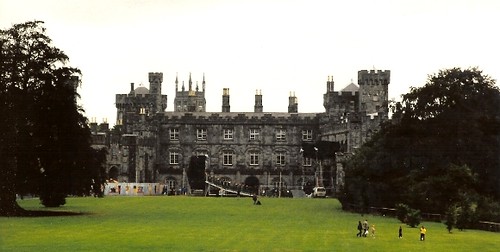 I slept late because the room I was in was filled with older guys who all seemed tired. Went to Kilkenny Castle with a hangover. It was quite nice. I bought a ticket for an open air theater performance that night of “Much Ado About Nothing.” I took the castle tour. It was really nice. Unlike Dover, the castle had been refurbished with original materials, art and furniture. Mailed postcards. Adidas athletic wear is very popular over here in Ireland, and England too. And not just the shirts, but the pants too (the whole outfit). I went on the Smithwick's Brewery tour, which turned out to be just a film strip and tasting (1 pint). But it was free. Next, I went to Smartmac's, which was an Irish owned fast food chain. I had gone last night and been satisfied with the meal. This time I felt sick afterwards. Took a nap before the show. It started to rain.

It ended up raining for the first half hour of the performance. The bleachers were filled with mostly adults. I knew I had read the play, but I had forgotten the plot. I ended up following it quite easily. Laughed a lot. The production and stage direction (lighting, music) was great. Much more fun than I expected. After the show, I went to sleep.

I planned to leave for Cork tomorrow. The trains are weird though, they only have a limited line service, so I don't know if I'll make it. Either way, I figure everything will be fine. I called home for the third time today. Spoke to mom. Heard a short update about President Clinton's problems yesterday on the train. He really has made some dumb choices (if this Monica Lewinsky allegation is true, most of them probably are too). It is a shame too, because he seems like a smart guy (2 terms of presidency at such a young age). Also makes me think that Bush, Reagan, and Nixon probably didn't face such private problems. Lots of Cadbury chocolate up in the United Kingdom.

I would like to start my own blog one day. This was a really nice blog that you made here. Keep up the success :P

While in Ireland, I read that the Smithwick's Brewery now brews only Budweiser. Talk about a slap in the face.

Eegads! Perhaps they were talking about the older Czech version Budveiser.

While in Ireland, I read that the Smithwick's Brewery now brews only Budweiser. Talk about a slap in the face.

Eegads! Perhaps they were talking about the older Czech version Budveiser.