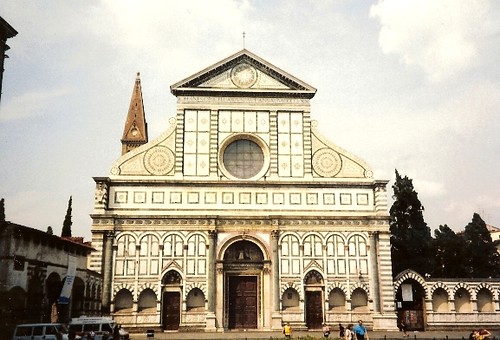 So we're on a train to Florence right now (minus Bill). I finally tended to my feet today. I only have one blister, and it isn't bothering me. What is bothersome are my two sandal friction cuts which I bandaged. I'm also on my last role of toilet paper. This problem is due to my cold, which hasn't improved much since Venezia. We arrived in Florence around 9:30 PM. We immediately left the station and went to a hotel that had approached us at the station. The guy and his dog were nice, but his wife (I assume) was talking to herself while she made up the extra beds. She seemed kind of scary.

Since we had found lodging early, we walked around the city for awhile. We stopped for a late dinner at a Chinese restaurant in the Piazza de Santa Maria Novella. My seat at the table (on the sidewalk) provided a perfect view of the church facade on a cool, clear night. It really was beautiful. After our inexpensive dinner, we went down to the Duomo. The ornate and colorful Baptistery, Church, and Campanile surprised me. The buildings were so rich in colored marble (green, pink, white) patterns, and sculpture. I was also shocked to see a whole lot of people sitting on the front stairs of the church. On the way back to our hotel, I stopped at a gelateria, and ended up paying 15,000 lire ($7) for a four scoop cone. This was definitely one of the bigger mistakes (money wise) I've made. Then, we went to bed to the loud, LOUD sounds of scooters and trucks. We have a shower in one corner of the room. The room itself is the nicest we've been in: colorful tile floor, large open window, and high ceiling. The hotel we are in (like most of the buildings in Florence) is a former palazzo. 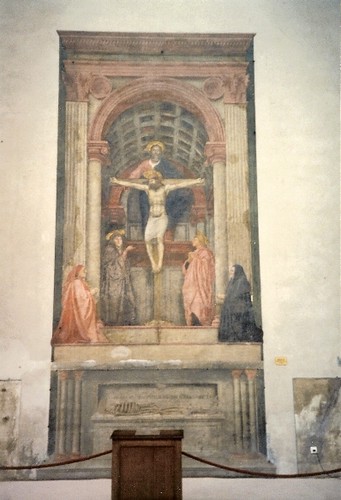 This morning I woke everyone up to go to the Uffizi (museum). When we got there, the wait in line was about one hour. (which wasn't bad at all since it was in the shade). Outside the museum were several copies of important sculptures (as well as originals like the Neptune Fountain), the most famous being Michelangelo's “David.” I didn't spend much time looking at it, probably because it was a copy, and a detailed look would be inaccurate. It was the same way with the “Gates of Paradise” on the Baptistery. Inside the museum, I recognized many of the artists, but few of the paintings from my (art history) classes. “The Madonna of the Goldfinch” by Raphael was noteworthy, as several by Leonardo da Vinci. There were also several portraits that I recognized, including that of Bia Medici. She was portrayed beautifully against a blue background. “The Venus of Urbino” was there too. The museum itself was also decorated with ceiling frescoes. The two main hallways were lined with sculptures and busts.

From there, Eric and Sam went back to the hotel to sleep and read. I can't seem to figure out why they aren't interested in seeing more sights, or at least hanging out in the city. The way I see it, I paid and went through a lot to get here, and I'm not going to spend the afternoons sitting around in a hotel room. Me and Dave went to the Palazzo Medici next. There we saw one of the main rooms, gilded with frescoes. We also sat in the courtyard for 1/2 hour. From there, we went to the Baptistery. Then, we went to a music store where Dave bought the new Rancid album, and I got the new Beastie Boys (Hello Nasty). We also went to the Medici family church, San Lorenzo. The apse was being renovated, but there was still plenty to see. We walked around the cloister courtyard. The second level was closed, as were the Medici chapels. We also went to Santa Maria Novella. There, I saw Masaccio's “Trinity” which is one of my favorite works. Unfortunately, I wasn't sure where to stand to get the true sense of (illusionary) perspective.

We went to get our last dinner together after sitting in the Piazza Santa Maria Novella for a bit. The night was cool and comfortable. Sam brought up his interest in leaving Europe on August 9th (3 weeks early). It didn't take long for Dave to decide to follow suit. I can safely attribute part of their ditch effort to their girlfriends (Eric had other reasons). Since I'm not homesick at all, the decision for me to stay and continue the trip alone was easy. We went to dinner at a pizzeria that had a garden terrace in the back. I ordered a big blonde Heineken which turned out to be a one litre (glass). Everyone else got water. After that, we went to the Dublin Pub where we drank pints of Guinness, Dark and Tan, and Strongbow (cider). The music included Bob Marley's “Legend” and a Tom Petty live album. It would be the last time we'd drink together in Europe.