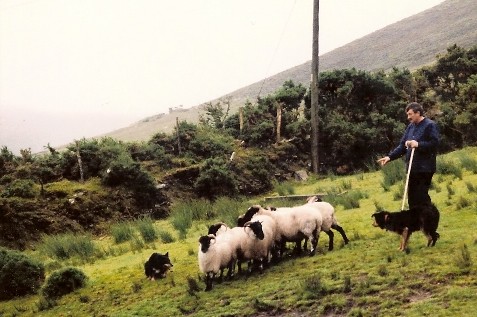 I awakened to the sound of rain pattering on the skylight. I decided to spend the day on the Ring of Kerry bus tour, despite the rain. I figure there has to be a rainbow and pot of gold for me out there. So far, the tour (despite feeling touristy) has been great. I tried my first Irish coffee, and it was great. I felt really ignorant when I didn't realize there was Irish whiskey in it. It just tasted so good. We stopped at a shepherd's home for a demonstration of his dogs. The two dogs (collies?) were so well trained, it was amazing. The sheep are crazy; they jump off cliffs and run up the mountain to eat their grass.

I think I like the cloudy weather. It is really neat to see the clouds and fog roll around and over the mountains. And the occasional rain shower adds to the effect. I have seen a few bits of blue sky, but I doubt it will clear up much. The rest of the trip was quite scenic, and the driver put on the “Celtic Moods” tape so we had some music too. I haven't written in here for several days, so I'm a little hazy on the events of the day/night. According to habit, though, I went to see some music, and got drunk. 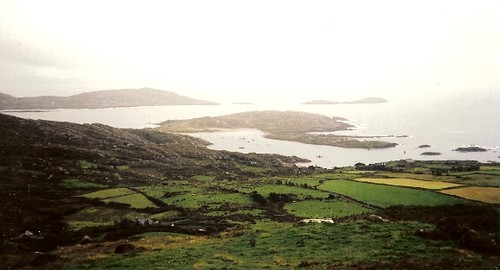 I decided to stop in Tralee and check out the festival. For the first time, the train station didn't have any town maps. I ended up walking four times the distance necessary to get to the town center. But once I saw the lights hanging across the street, I decided to stay. Also, the Finnegan's hostel was right in the middle of the town. It was a little expensive ($15). I took a walk throughout the park, where there was a giant rose garden, hence the “Rose of Tralee” beauty pageant festival. The city was a little too busy/big for me. I caught the second set of a show by the Guinness Jazz Band. Since I have no idea what is good jazz, I can't report on their skills. They were playing a lot of music that I knew though. The drummer was only 15 too, so he definitely had some natural talent.

The night arrived, and the Guinness Gig Rig (18 wheel truck) opened into a stage. After checking the scene at the first act, I decided to find some music in a pub. The group I found was made up of two or three old guys. They were good, but I didn't have a seat, and was cramped under the speaker by the door. For that reason, I left and went back early (11 PM). Oh, there were some impressive carnival rides set up. The whole scene reminded my of the Grady Squash festival in “Doc Hollywood.” 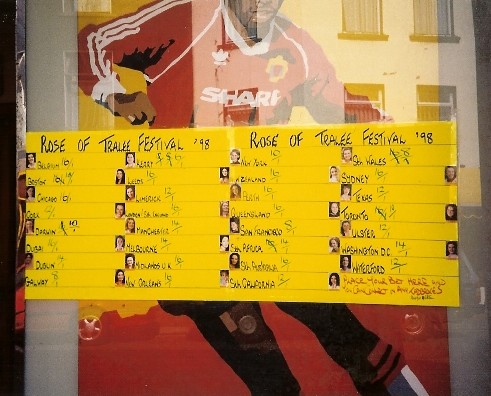 Earlier that night, I had decided to splurge and get a good dinner. I went to Finnegan's, which was in the basement of the hostel (though not associated with the hostel). The atmosphere was really nice. Dark, cool, quiet, green candles in wine bottles, peat fire. I got the following: gin and tonic, warm brown bread, onion soup, chicken kiev w/salad and potatoes, chocolate mousse and Irish coffee. It was delicious. With tip, it cost about $40. The whole experience was bettered by the older (50+) couple who sat next to me. They had been all over, China, India, South America, and Europe. They were from San Diego. There was a picture of JFK on the wall which makes me wonder if he had eaten there. Only know do I realize that he was Irish, and that might be the reason.

The room I was in sucked. When I came back at one point during the afternoon, my sheets were all wet! I couldn't get a warm shower in the morning. For the first time, I had to sleep on the top bunk. There was a guy who kept me up with his snoring and farting.