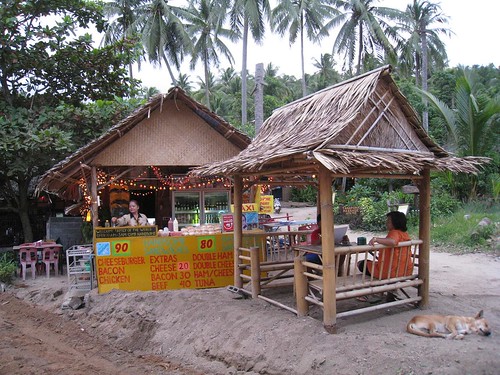 I was the last of our Dutch/German/American/English posse to leave Thong Nai Pan Noi. My first month in Thailand was running out and it was time to launch a Visa run via the Burmese border. The adventure began with a nearly missed boat ride from Koh Phangan to Surat Thani on the mainland. I had to wake up my taxi driver at sunrise. Thankfully she sleeps right in the back of the her restaurant. The boat ride was bittersweet, though I was excited to be heading toward the islands of The Andaman Sea.

Once off the boat, we were all shuffled onto a big bus for the hour's ride to Surat Thani. Everyone was then placed in the back of a pick-up and brought to their respective tour operator. If I haven't mentioned it before, this whole process is made easy by color-coded stickers all the tourists are given before departure on the ferries.

Once at the travel office, a staging ground/restaurant with a Samsung LCD screening a Brangelina movie, it was a matter of waiting my turn. Half the crowd left for Phuket, and the other half left for Koh Phi Phi Don. Apparently I was the only one headed to the wonderful border town of Ranong. 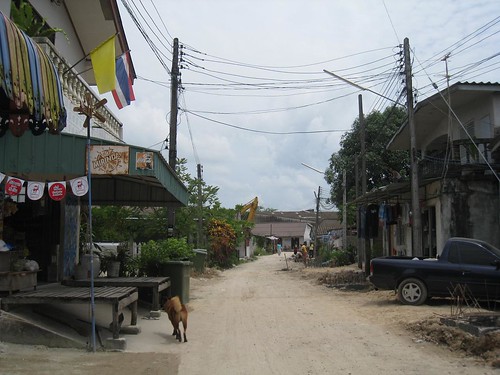 The bus dropped me off and I took off with a local “taxi” driver. I went with the flow, taking a room at a resort he recommended, which was geared completely around people spending one night in Rangon to arrange for a new Visa. After settling into my room, I walked through a local market, got a bite to eat, a quick haircut while a Burmese guy flirted with me incessantly, my first taste of Thai whiskey mixed with pink Tang from some friendly locals who offered to take me out on the town for a few hours (they were drunk, I declined), and a few solid hours of cheap internet time before crashing.