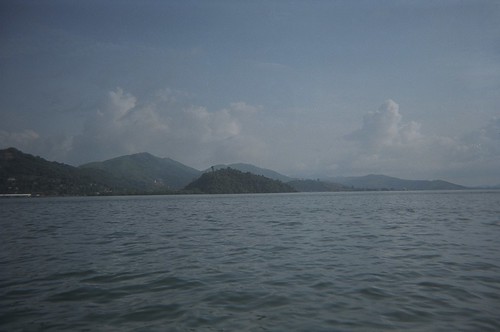 My taxi driver picked me up in the morning and took me to the pier from which I'd take a longboat to Burma (aka Myanmar).  When we stepped out on the pier around 8am, I got my exit stamp at the Thai immigration window, and then negotiated the cost of a longboat to Burma and back.  The more the driver and boatman tried to rush me, the more power I realized I had to negotiate.  I'd seen a couple of white girls on the way over, complete with color-coded stickers on their shirts (from the travel agent that arranged their Visa runs), so I knew there had to be a cheaper way to cross the border than chartering my own boat.

After cutting the price down by 30% (or $5), I boarded my first traditional longboat for the 30-minute ride to Burma.  The views were beautiful.  As we approached the Burmese side, golden pagoda's came in to view along various hilltops.  I suddenly found myself wanting to explore the country, despite having previously written it off due to the recent cyclone catastrophe.  I then realized my plan to spend 2-3 months in Thailand meant I'd already accounted for my two exit/re-entries within a 6-month period.  I could go to Burma, but it would mean I couldn't leave Asia via Bangkok (which I hope will bring me the cheapest airfare possible). 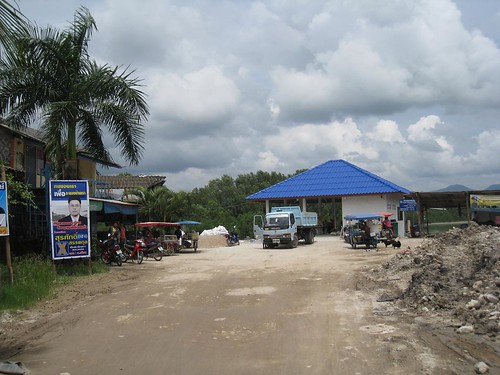 I was in Burma for just a few minutes, and it was back on the boat to Rangon.  Thai immigration updated my passport, allowing me free reign in the country for another 30 days.  My driver brought me back to my hotel where I picked up my backpack and went to the nearby pier for the ferry to Koh Phayam.  Murphy's Law struck in the form of low tide.  Of course there was a motorbike taxi cruising around picking up people like me who were at the wrong pier.  I tried to negotiate the rate but failed.  Several Thais also joined me in the little side carriage, and after we were delivered to the right place, I was happy to see we all paid the same price (not what you'd see in India).

The time had come to see if Koh Phayam was really just “a bunch of bamboo bungalows on the beach” like the expat on Koh Phangan told me.

PS – Should I claim credit on travel maps for having visited Burma simply for the purpose of renewing my Thai Visa?  And for that matter, Malaysia which I only visited for a few hours while staying in Singapore?  Leave a comment and let me know!

You've been there, haven't you? And you probably even got a stamp. Yes, in my book, you can count it.

You've been there, haven't you? And you probably even got a stamp. Yes, in my book, you can count it.

I agree, you should claim it. Enjoying your blog!