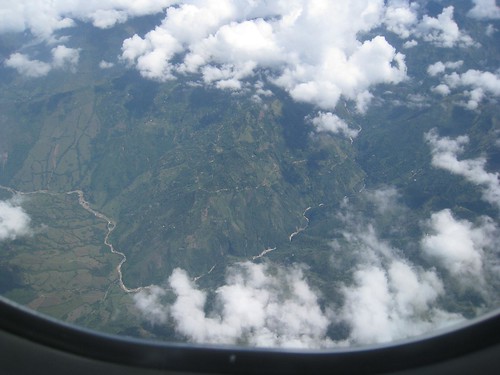 View on the flight from Bogota to Medellin

I managed one and a half hours of quality sleep after my night out in the Zona Rosa, leaving me incredibly hungover for the flight to Medellin. While the air time is only 25 minutes (as opposed to around 11 hours by bus), I still had to get to the airport, check in, pass security, etc. Getting from the hostel to the Avianca gate went smoothly, and I found myself waiting around with an hour and a half to kill.

There was some notable turbulence on the flight, but it was made up for by the views below of beautiful green mountains, rivers, and a giant cascading waterfall. And then I was in Medellin (or at least the major airport outside the city!). 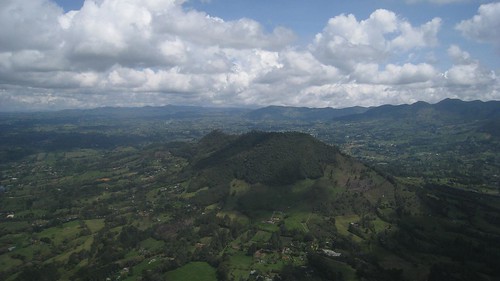 I took the scenic airport shuttle bus to the city center. The airport is about 1,000 meters higher in elevation than the city which lies in a valley. The result of this geography was one of the most amazing bus rides I've ever taken from an airport to a city. The land seemed lush and tropical as we winded our way down the mountains and into the valley.

The city center was bustling on the wonderful, warm, sunny Saturday. It felt kinetic. I immediately caught a cab to Casa Kiwi Hostel, an American owned hostel in the upscale El Poblado district of the city, and just a few blocks from Medellin's Zona Rosa. It was a bit rough around the edges, and was undergoing massive renovations to improve rooms, and install a bar and pool, however it was full of people and I was still exhausted.

Everyone went out that Saturday night but me and a few others. I was self-conscious about it, but I simply didn't have the energy.